When in Almaty, make a side trip to see Lake Issyk in Esik, approximately Esik away. Next up on the itinerary: get great views at Kok-Tobe Hill, stroll around Park Named After Panfilov’s 28 Guardsmen, pause for some serene contemplation at Baiken Mosque, and hit the slopes at Shymbulak Ski Resort.

For more things to do, other places to visit, where to stay, and other tourist information, read Almaty trip planning website. 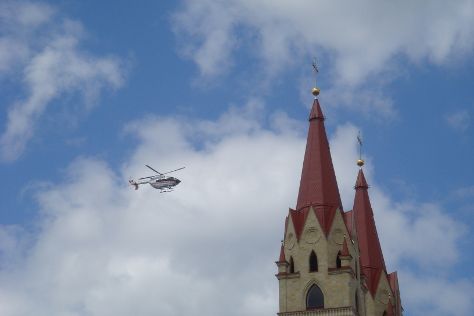 Kick off your visit on the 27th (Mon): take in the architecture and atmosphere at Cathedral of the Blessed Virgin Mary of Fatima, pause for some photo ops at Statue of Abai Kunanbayev, take in the awesome beauty at Bektau-Ata Mountain Area, then steep yourself in history at Eternal Flame, and finally appreciate the history behind Monument to Victims of Political Repression. Get ready for a full day of sightseeing on the 28th (Tue): examine the collection at Temirtausky City Local Lore and History Museum, see the interesting displays at Karaganda Regional Museum, then pause for some serene contemplation at St. Joseph's Cathedral, and finally take in the architecture and atmosphere at Holy Cross Church.

Getting from Almaty to Karaganda by combination of bus and flight takes about 4 hours. Other options: drive; or take a train. In January, Karaganda is slightly colder than Almaty - with highs of -11°C and lows of -22°C. Wrap up your sightseeing on the 28th (Tue) early enough to drive to Nur-Sultan.
more less

On the 29th (Wed), buy something for everyone on your list at Khan Shatyr, then take in panoramic vistas at Bayterek Tower, then learn about all things military at National Museum of Kazakhstan, and finally contemplate in the serene atmosphere at Hazret Sultan Mosque. On your second day here, pause for some serene contemplation at Assumption Cathedral, contemplate in the serene atmosphere at Nur-Astana Mosque, take in the architecture and atmosphere at Temple of St. Seraphim of Sarov, pause for some photo ops at Zhanibek and Kerei Monument, then appreciate the history behind Monument to the Soldiers of World War II, and finally get great views at Quay Astana.

Drive from Karaganda to Nur-Sultan in 3 hours. Alternatively, you can take a train; or take a bus. Expect a daytime high around -13°C in January, and nighttime lows around -23°C. Cap off your sightseeing on the 31st (Fri) early enough to travel back home.
more less