©
Pinzolo is a small town and comune situated in Val Rendena in Trentino in the northern Italian Alps at an elevation of 800m.It is mainly known as a ski resort during the winter months and as a popular touristic destination in the summer. Start off your visit on the 27th (Fri): stop by Findy Shop and then gear up at Trentino Ski Emotion. On the next day, fly down the slopes at Skiarea Campiglio, hit the slopes at Scuola di Sci Dolomiti, identify plant and animal life at Val Nambrone, then get great views at Lago delle Malghette, then explore the fascinating underground world of Galleria Paradiso, and finally hit the slopes at Skiarea Campiglio.

Things to do in Pinzolo 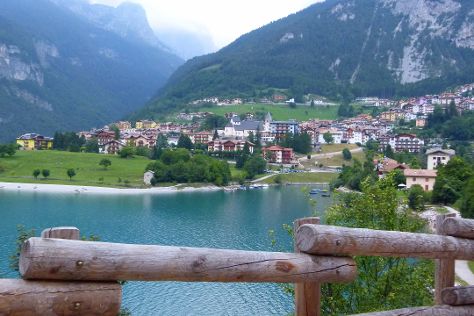 For reviews, maps, more things to do, and other tourist information, refer to the Andalo route tool .

Traveling by car from Pinzolo to Andalo takes 1.5 hours. Alternatively, you can take a bus. In December, daily temperatures in Andalo can reach 9°C, while at night they dip to -3°C. Wrap up your sightseeing on the 30th (Mon) early enough to drive to Castelrotto.
more less

Things to do in Andalo

You can drive from Andalo to Castelrotto in 1.5 hours. Traveling from Andalo in December, expect nights in Castelrotto to be about the same, around -4°C, while days are slightly colder, around 3°C. Finish up your sightseeing early on the 1st (Wed) so you can travel to San Vigilio.
more less

Things to do in Castelrotto

On the 2nd (Thu), identify plant and animal life at Prati di Croda Rossa, get outside with Adrenaline X-treme Adventures, then take your sightseeing to a higher altitude at Alpe di Fanes, and finally glide through natural beauty at Scuola Italiana Sci & Snowboard San Vigilio Di Marebbe.

Traveling by car from Castelrotto to San Vigilio takes 1.5 hours. When traveling from Castelrotto in January, plan for a bit warmer days in San Vigilio, with highs around 8°C, while nights are about the same with lows around -3°C. Wrap up your sightseeing on the 2nd (Thu) to allow time to drive to Canazei.
more less

Things to do in San Vigilio

To see maps, more things to do, where to stay, and more tourist information, refer to the Canazei online sightseeing planner .

Getting from San Vigilio to Canazei by car takes about 1.5 hours. In January, daily temperatures in Canazei can reach 8°C, while at night they dip to -3°C. Cap off your sightseeing on the 4th (Sat) early enough to travel back home.
more less

Things to do in Canazei