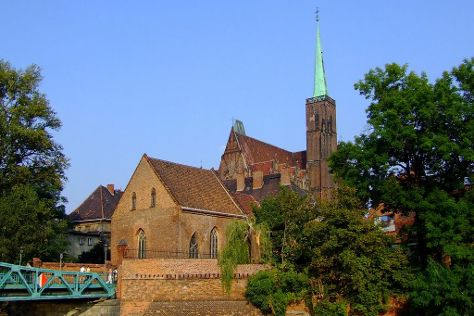 Known for its relaxed and liberal atmosphere, the energetic city of Wroclaw lures visitors with its rich cultural heritage and pedestrian-friendly old town.

Krakow to Wroclaw is an approximately 2.5-hour car ride. You can also take a bus; or take a train. In July, plan for daily highs up to 79°F, and evening lows to 58°F. On the 2nd (Sun), you'll have the morning to explore before heading off to Prague.
more less

Things to do in Wroclaw

On the 2nd (Sun), contemplate in the serene atmosphere at St. Vitus Cathedral, then step into the grandiose world of Prague Castle, then admire the striking features of Prague Astronomical Clock, and finally get to know the fascinating history of Staromestske namesti.

To find traveler tips, more things to do, ratings, and tourist information, use the Prague road trip planning website.

You can drive from Wroclaw to Prague in 4 hours. Alternatively, you can take a train; or take a bus. Expect a daytime high around 76°F in August, and nighttime lows around 57°F. Wrap up your sightseeing on the 3rd (Mon) to allow time to travel to Vienna.
more less

You've added Schonbrunn Palace, Spanish Riding School, Globe Museum of the Austrian National Library, and other attractions to your itinerary. Start off your visit on the 3rd (Mon): explore the historical opulence of Schonbrunn Palace, explore the world behind art at Albertina, don't miss a visit to St. Stephen's Cathedral, then contemplate in the serene atmosphere at St. Michael's Church, and finally hunt for treasures at Vienna Naschmarkt.

To see more things to do, other places to visit, traveler tips, and other tourist information, read our Vienna day trip app.

Fly from Prague to Vienna in 3.5 hours. Alternatively, you can drive; or take a shuttle. In August in Vienna, expect temperatures between 80°F during the day and 60°F at night. On the 4th (Tue), wrap the sightseeing up by early afternoon so you can drive to Bratislava.
more less 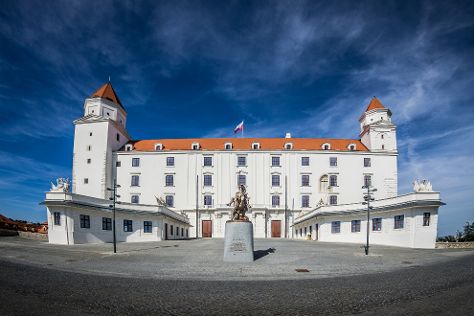 You've added Sigismund Gate, Michalska Brana, Bratislava Old Town, and other attractions to your itinerary. On the 4th (Tue), contemplate in the serene atmosphere at Blue Church of St. Elizabeth, contemplate the long history of Primates' Palace (Primacialny palac), take a stroll through Bratislava Old Town, step into the grandiose world of Bratislava Castle, then steep yourself in history at Michalska Brana, and finally take in panoramic vistas at Sigismund Gate.

For where to stay, photos, and other tourist information, read our Bratislava travel planner.

You can drive from Vienna to Bratislava in an hour. Other options are to drive; or take a bus; or take a train. In August, daytime highs in Bratislava are 81°F, while nighttime lows are 60°F. Finish up your sightseeing early on the 5th (Wed) so you can go by car to Budapest.
more less

To find more things to do, ratings, and other tourist information, you can read our Budapest trip planner.

Traveling by car from Bratislava to Budapest takes 2 hours. Alternatively, you can drive; or take a bus; or take a train. In August in Budapest, expect temperatures between 82°F during the day and 60°F at night. Finish your sightseeing early on the 6th (Thu) to allow enough time to drive to Ljubljana.
more less 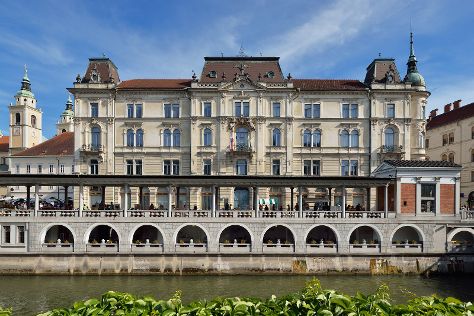 Your day by day itinerary now includes Prešeren Square as well as Dragon Bridge. Kick off your visit on the 6th (Thu): snap pictures at Dragon Bridge.

Getting from Budapest to Ljubljana by car takes about 4.5 hours. Other options: take a shuttle; or take a bus. August in Ljubljana sees daily highs of 80°F and lows of 56°F at night. Finish up your sightseeing early on the 7th (Fri) so you can go by car to Venice.
more less

Plan a trip to Venice easily and quickly by telling Inspirock to suggest an itinerary.

You can drive from Ljubljana to Venice in 2.5 hours. Alternatively, you can take a bus; or do a combination of bus and train. Traveling from Ljubljana in August, expect somewhat warmer with lows of 66°F in Venice. On the 8th (Sat), you'll travel back home.
more less