Nyhavn and Ny Carlsberg Glyptotek are good opportunities to explore the local culture. Museum-lovers will appreciate National Museum of Denmark and Amalienborg. There's still lots to do: take in the spiritual surroundings of Our Saviour's Church, step into the grandiose world of Kastellet, take in the architecture and atmosphere at Frederiks Kirke (Marmorkirken), and take in panoramic vistas at Rundetarn.

For photos, maps, reviews, and other tourist information, go to the Copenhagen tour itinerary planner.

Vilnius, Lithuania to Copenhagen is an approximately 4.5-hour flight. You can also do a combination of flight and train; or do a combination of car and ferry. The time zone difference when traveling from Vilnius to Copenhagen is minus 1 hour. In June, daily temperatures in Copenhagen can reach 22°C, while at night they dip to 11°C. Finish your sightseeing early on the 8th (Mon) to allow enough time to travel to Lokken.
more less

©
On the 9th (Tue), enjoy the sea views from Hirtshals Fyr, visit a coastal fixture at Rubjerg Knude, then stroll through Lokken Beach, and finally find something for the whole family at Faarup Sommerland.

For ratings, other places to visit, traveler tips, and more tourist information, refer to the Lokken driving holiday website .

Fly from Copenhagen to Lokken in 4 hours. Alternatively, you can drive; or do a combination of train and bus. In June, daily temperatures in Lokken can reach 21°C, while at night they dip to 13°C. Cap off your sightseeing on the 9th (Tue) early enough to go by car to Blaavand.
more less

Things to do in Lokken

©
On the 10th (Wed), enjoy the sea views from Blaavandshuk Fyr, kick back and relax at Blaavand Beach, and then admire the striking features of Tirpitz.

To find reviews, ratings, maps, and other tourist information, use the Blaavand trip itinerary planning site .

Drive from Lokken to Blaavand in 4 hours. Alternatively, you can take a bus. Cap off your sightseeing on the 10th (Wed) early enough to go by car to Odense.
more less

Things to do in Blaavand

Start off your visit on the 11th (Thu): see the interesting displays at The Funen Village, then get to know the resident critters at Odense ZOO, and then take an in-depth tour of The Danish Railway Museum. Get ready for a full day of sightseeing on the 12th (Fri): get curious at Oekolariet, step into the grandiose world of Koldinghus, and then take in nature's colorful creations at Geografisk Have.

For traveler tips, ratings, more things to do, and other tourist information, use the Odense tour planner.

Traveling by car from Blaavand to Odense takes 2 hours. Alternatively, you can take a train; or do a combination of bus and train. In June in Odense, expect temperatures between 21°C during the day and 10°C at night. Finish your sightseeing early on the 12th (Fri) to allow enough time to drive to Moen.
more less

Kolding, Oekolariet
Highlights from your plan 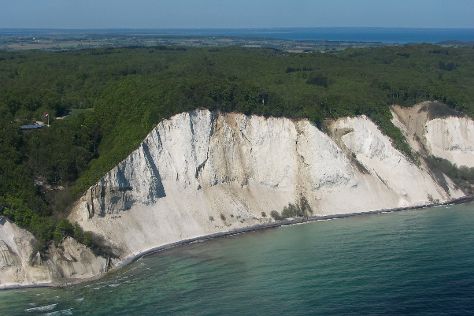 To find maps, more things to do, photos, and other tourist information, refer to the Moen road trip tool .

You can drive from Odense to Moen in 2.5 hours. Other options are to do a combination of train and taxi; or take a train. Traveling from Odense in June, expect a bit warmer with lows of 14°C in Moen. Cap off your sightseeing on the 13th (Sat) early enough to travel back home.
more less

Things to do in Moen