©
L'Estartit is a small town and seaside resort on the Costa Brava, on the north-eastern coast of Spain.The town is situated between the foothills of the Montgrí Massif and the Mediterranean Sea, and is part of the municipality of Torroella de Montgrí, in the Baix Empordà county, Girona province, autonomous community of Catalonia.L'Estartit stretches North-South from Cala Montgó, at the southern tip of the Bay of Roses (Badía de Roses) to the Ter River estuary in the Bay of Pals (Badía de Pals). Get a sense of the local culture at Castle of Montgri and Fundacio Mascort. We've included these beaches for you: La playa de Tamariu and Cala Montgo. Venture out of the city with trips to Platja Fonda (in Begur) and Scuba & Snorkeling (in Llafranc). There's lots more to do: tour the pleasant surroundings at L'illa Roja, enjoy the sand and surf at Playa Sa Riera, wander the streets of San Marti d'Empuries, and explore the world behind art at Museu de la Mediterrania.

Before you visit L'Estartit, use our trip planner to discover what you can do and see there.

©
Cadaqués is a town in the Alt Empordà comarca, in the province of Girona, Catalonia, Spain. On the 15th (Tue), see some colorful creatures with a scuba or snorkeling tour, see the interesting displays at Coll de Roses, Wine Family Museum, then explore the galleries of Salvador Dali House, and finally enjoy the sea views from Far de Cala Nans (Cala Nans Lighthouse). Keep things going the next day: enjoy the sand and surf at Plage Canyelles Petites, then stroll around Parc Natural dels Aiguamolls de l'Emporda, then take in the architecture and atmosphere at Monasterio de Sant Pere de Rodes, and finally contemplate in the serene atmosphere at Iglesia de Santa Helena de Roda.

Getting from L'Estartit to Cadaques by car takes about 1.5 hours. September in Cadaques sees daily highs of 30°C and lows of 19°C at night. Cap off your sightseeing on the 16th (Wed) early enough to go by car to Lloret de Mar.
more less 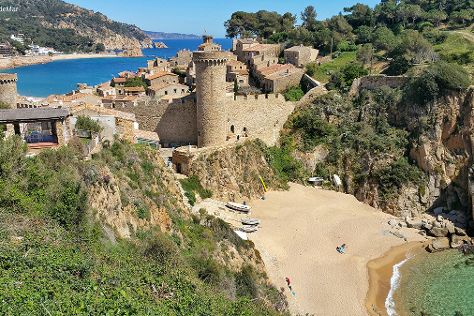 For traveler tips, where to stay, photos, and other tourist information, use the Lloret de Mar online vacation maker.

Traveling by car from Cadaques to Lloret de Mar takes 2 hours. Alternatively, you can do a combination of train and bus; or take a bus. In September, daytime highs in Lloret de Mar are 31°C, while nighttime lows are 17°C. Finish your sightseeing early on the 19th (Sat) to allow enough time to travel back home.
more less