Bogota, Colombia to Bracciano is an approximately 18-hour combination of flight and car. The time zone changes from Colombia Time to Central European Time, which is usually a 6 hour difference. Traveling from Bogota in May, expect Bracciano to be a bit warmer, temps between 28°C and 17°C. Cap off your sightseeing on the 7th (Thu) early enough to go by car to Tivoli.
more less

Things to do in Bracciano 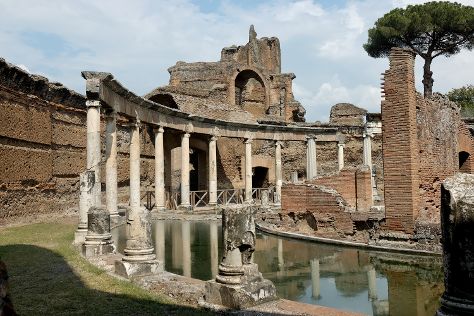 ©
Tivoli is a town and comune in Lazio, central Italy, about 30km east-north-east of Rome, at the falls of the Aniene river where it issues from the Sabine hills. Villa d'Este and Monastero Di S.Benedetto are good opportunities to explore the local culture. You'll explore and learn at Museo Archeologico Nazionale di Palestrina and Istituzione Palazzo Rospigliosi. Change things up with these side-trips from Tivoli: Minardi Frascati Winery (in Frascati), Abbazia Greca di San Nilo (in Grottaferrata) and Bunker Soratte (in Sant'Oreste). There's lots more to do: explore the ancient world of Villa Adriana, take in the architecture and atmosphere at Monastero di Santa Scolastica, and step into the grandiose world of Rocca Pia.

To find more things to do, where to stay, maps, and tourist information, refer to the Tivoli itinerary app .

Drive from Bracciano to Tivoli in 1.5 hours. Alternatively, you can take a train; or take a bus. May in Tivoli sees daily highs of 29°C and lows of 14°C at night. Cap off your sightseeing on the 10th (Sun) early enough to go by car to Ardea.
more less

Things to do in Tivoli

©
Ardea is an ancient town and comune in the Metropolitan City of Rome, 35km south of Rome and about 4km from today's Mediterranean coast.The economy is mostly based on agriculture, although, starting from the 1970s, industry has had an increasingly important role.HistoryArdea is one of the most ancient towns in western Europe, founded about in the 8th century BC was the capital of the Rutuli, mentioned in the Aeneid.In 509 BC Lucius Tarquinius Superbus, the king of Rome sought unsuccessfully to take the town by storm, and then commenced a siege of the town. Kick off your visit on the 11th (Mon): enjoy the sand and surf at La Capannina Lavinio, stroll through Lido La Playa, then stroll the grounds of Sicily Rome American Cemetery and Memorial, and finally stroll the grounds of Beach Head War Cemetery.

To see more things to do, maps, where to stay, and more tourist information, use the Ardea travel route builder .

Traveling by car from Tivoli to Ardea takes 1.5 hours. Traveling from Tivoli in May, expect nights in Ardea to be about the same, around 15°C, while days are little chillier, around 26°C. Wrap up your sightseeing by early afternoon on the 12th (Tue) to allow time for travel back home.
more less

Things to do in Ardea