The commercial capital of Madhya Pradesh, Indore blends its historic past with future-oriented modernization.

Deepen your sense of the past at sights like Mahakaleshwar Jyotirlinga and Rajwada Indore. Explore Indore's surroundings by going to Ujjain (Bharat Mata Mandir, Harsiddhi Temple, & more). There's more to do: contemplate in the serene atmosphere at Khajrana Ganesh Mandir.

For traveler tips, maps, more things to do, and tourist information, use the Indore road trip planner.

Kolkata (Calcutta) to Indore is an approximately 4-hour flight. You can also drive; or take a train. Traveling from Kolkata (Calcutta) in February, Indore is a bit cooler at night with lows of 16°C. Cap off your sightseeing on the 3rd (Mon) early enough to go by car to Bhopal.
more less

Things to do in Indore

Ujjain
Highlights from your plan 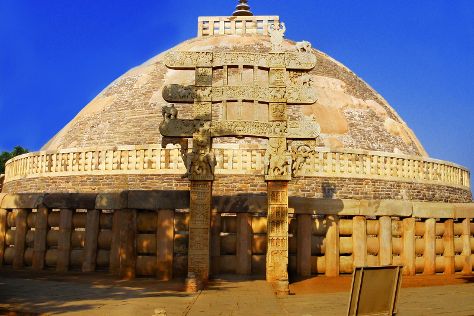 A pair of vast lakes separate the old and the new in Bhopal, the state capital.

On the 4th (Tue), learn about all things military at Yodhasthal, explore the ancient world of Buddhist Monuments at Sanchi, and then admire the striking features of Birla Mandir.

To find more things to do, reviews, and more tourist information, refer to the Bhopal day trip planning app .

Traveling by car from Indore to Bhopal takes 3 hours. Alternatively, you can take a bus; or take a train. In February, daytime highs in Bhopal are 33°C, while nighttime lows are 16°C. Wrap up your sightseeing on the 4th (Tue) early enough to drive to Khajuraho.
more less

Things to do in Bhopal

Start off your visit on the 5th (Wed): contemplate the long history of Hanuman Temple, admire the striking features of Kandariya Mahadev Temple, then steep yourself in history at Pratapeswar Temple, then admire the landmark architecture of Lakshmana Temple, and finally take an in-depth tour of Khajuraho.

To see maps, where to stay, other places to visit, and more tourist information, you can read our Khajuraho online visit planner .

You can drive from Bhopal to Khajuraho in 5.5 hours. Another option is to take a train. Finish up your sightseeing early on the 5th (Wed) so you can travel to Orchha.
more less

Things to do in Khajuraho 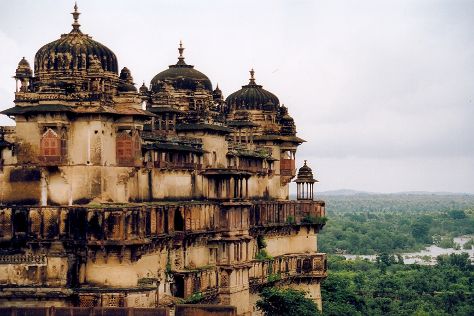 A small market and farming town by the river, Orchha was once the capital of a powerful kingdom, and still shows as much in its historic sites.

To see maps, other places to visit, where to stay, and tourist information, go to the Orchha trip planner .

Traveling by car from Khajuraho to Orchha takes 4 hours. In February, daily temperatures in Orchha can reach 32°C, while at night they dip to 15°C. Finish your sightseeing early on the 7th (Fri) so you can drive to Gwalior.
more less

Things to do in Orchha

The historic city of Gwalior offers an introduction to the medieval dynastic politics of the region.

To see maps, where to stay, traveler tips, and other tourist information, read Gwalior trip planner.

Getting from Orchha to Gwalior by car takes about 3 hours. In February, plan for daily highs up to 32°C, and evening lows to 13°C. Wrap up your sightseeing on the 8th (Sat) to allow time to travel back home.
more less

Things to do in Gwalior