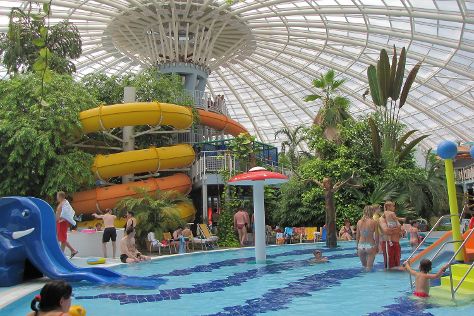 ©
Hajdúszoboszló is a town in Hajdú-Bihar county, Hungary, 19km southwest of county seat Debrecen. Your day by day itinerary now includes Aqua Palace Hajduszoboszlo as well as Aquaticum Medicinal and Thermal Baths. On the 27th (Sat), indulge in some personalized pampering at Aqua Palace Hajduszoboszlo. Keep things going the next day: relax and rejuvenate at Aquaticum Medicinal and Thermal Baths.

For other places to visit, photos, and more tourist information, go to the Hajduszoboszlo trip itinerary planning app.

Sibiu, Romania to Hajduszoboszlo is an approximately 5.5-hour car ride. You'll gain 1 hour traveling from Sibiu to Hajduszoboszlo due to the time zone difference. In April in Hajduszoboszlo, expect temperatures between 20°C during the day and 7°C at night. You'll have a few hours on the 30th (Tue) to wrap things up before traveling to Bratislava.
more less

Things to do in Hajduszoboszlo

Kick off your visit on the 30th (Tue): contemplate in the serene atmosphere at St. Martin's Cathedral (Dom svateho Martina) and then appreciate the extensive heritage of Bratislava Old Town.

Getting from Hajduszoboszlo to Bratislava by car takes about 4.5 hours. Other options: do a combination of car and flight. In April, daytime highs in Bratislava are 19°C, while nighttime lows are 6°C. On the 1st (Wed), you'll have the morning to explore before heading off to Vienna.
more less

Vienna is known for historic sites, museums, and nightlife. Your plan includes some of its best attractions: wander the streets of Historic Center of Vienna, explore the historical opulence of Schonbrunn Palace, take in the architecture and atmosphere at St. Stephen's Cathedral, and explore the world behind art at Belvedere Palace.

To find maps, more things to do, reviews, and tourist information, refer to the Vienna trip itinerary tool.

Traveling by car from Bratislava to Vienna takes an hour. Alternatively, you can take a bus; or take a train. In May in Vienna, expect temperatures between 22°C during the day and 11°C at night. Wrap up your sightseeing by early afternoon on the 3rd (Fri) to allow enough time to travel back home.
more less