To find maps, where to stay, reviews, and other tourist information, you can read our Paris travel itinerary planner.

If you are flying in from United States, the closest major aiports are Paris-Orly Airport, Charles de Gaulle International Airport and Paris Beauvais Tillé Airport. Expect a daytime high around 77°F in August, and nighttime lows around 57°F. You will leave for Dijon on the 20th (Thu).
more less

For reviews, traveler tips, and other tourist information, read our Dijon vacation planner.

Getting from Paris to Dijon by train takes about 2.5 hours. Other options: drive; or take a bus. In August in Dijon, expect temperatures between 77°F during the day and 58°F at night. You'll set off for Pesmes on the 20th (Thu).
more less

Things to do in Dijon

©
Pesmes is a commune in the Haute-Saône department in the region of Bourgogne-Franche-Comté in eastern France. Start off your visit on the 20th (Thu): pause for some serene contemplation at Eglise Saint-Hilaire de Pesmes.

To see other places to visit, ratings, maps, and tourist information, go to the Pesmes driving holiday planner.

You can drive from Dijon to Pesmes in an hour. In August in Pesmes, expect temperatures between 79°F during the day and 57°F at night. On the 20th (Thu), you'll have the morning to explore before heading off to Chateau Chalon.
more less

Things to do in Pesmes

©
Start off your visit on the 20th (Thu): don't miss a visit to Eglise Saint-Pierre de Chateau-Chalon.

To see traveler tips, more things to do, photos, and more tourist information, you can read our Chateau Chalon day trip site.

Traveling by car from Pesmes to Chateau Chalon takes 1.5 hours. In August, daily temperatures in Chateau Chalon can reach 76°F, while at night they dip to 58°F. Wrap up your sightseeing on the 20th (Thu) early enough to travel to Belley.
more less

Things to do in Chateau Chalon

Belley is a commune in the Ain department in eastern France.HistoryBelley is of Roman origin, and in the 5th century became an episcopal see. For reviews, traveler tips, photos, and other tourist information, go to the Belley trip itinerary builder site.

Traveling by car from Chateau Chalon to Belley takes 2.5 hours. Expect a daytime high around 79°F in August, and nighttime lows around 58°F. You'll set off for Saint-Antoine-l'Abbaye on the 21st (Fri).
more less

Things to do in Belley

For reviews, where to stay, and tourist information, use the Saint-Antoine-l'Abbaye trip itinerary maker app.

Things to do in Saint-Antoine-l'Abbaye

Capital of the Alps

At the foot of the French Alps where the river Drac joins the Isère (the lion and the serpent), Grenoble offers you tons of winter and summer activities to keep the entire family busy, like hiking, climbing, skiing, and snowboarding, as well as swimming in clean mountain lakes.

To find other places to visit, more things to do, reviews, and tourist information, go to the Grenoble vacation maker site.

Traveling by car from Saint-Antoine-l'Abbaye to Grenoble takes an hour. August in Grenoble sees daily highs of 78°F and lows of 57°F at night. On the 23rd (Sun), you're off to Paris.
more less

Things to do in Grenoble 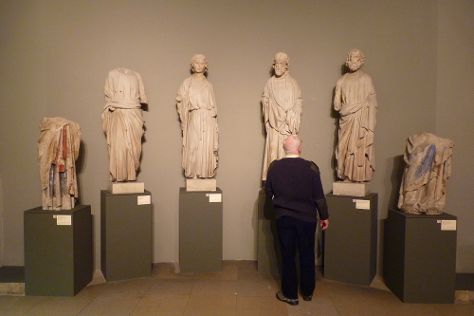 Discover how to plan a Paris trip in just a few steps with Inspirock's itinerary builder.

Getting from Grenoble to Paris by train takes about 4 hours. Other options: fly; or drive. On the 26th (Wed), you're off to home.
more less