Queen of the Hills

The train, the tea, and the hills bring visitors to Darjeeling, one of India's most famous and well-preserved Raj-era hill stations.

Change things up with a short trip to Pine View Nursery in Kalimpong (about 2 hours away). And it doesn't end there: get to know the resident critters at Padmaja Naidu Himalayan Zoological Park, get great views at Ahal Dara View Point, don't miss a visit to Batasia Loop, and appreciate the extensive heritage of Chowrasta.

To see where to stay, other places to visit, reviews, and more tourist information, use the Darjeeling planning site .

In August, daytime highs in Darjeeling are 38°C, while nighttime lows are 30°C. Wrap up your sightseeing on the 17th (Sat) early enough to travel to Kolkata (Calcutta).
more less

Things to do in Darjeeling 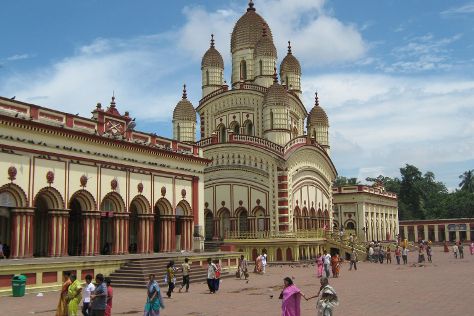 Kick off your visit on the 18th (Sun): stop by Kumortuli, then make a trip to College Street (Boi Para), then learn more about the world around you at Indian Museum (Jadu Ghar), and finally take in the local highlights with Walking tours. On your second day here, don't miss a visit to Mother House, see the interesting displays at Victoria Memorial Hall, then take in the views from Howrah Bridge, then take in the spiritual surroundings of Jain Temple - Kolkata, and finally contemplate in the serene atmosphere at Dakshineswar Kali Temple.

You can do a combination of taxi and flight from Darjeeling to Kolkata (Calcutta) in 4 hours. Alternatively, you can drive; or do a combination of taxi and train. In August, daily temperatures in Kolkata (Calcutta) can reach 39°C, while at night they dip to 30°C. On the 20th (Tue), wrap the sightseeing up by early afternoon so you can travel back home.
more less