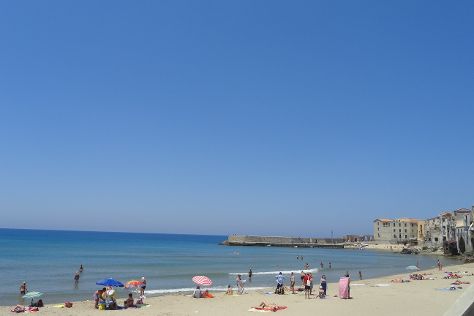 ©
Cefalù is a city and comune in the Province of Palermo, located on the northern coast of Sicily, Italy on the Tyrrhenian Sea about 70km east of the provincial capital and 185km west of Messina. Venture out of the city with trips to Sanctuary of the Madonna di Tindari (in Tindari), Castello di Caccamo (in Caccamo) and Messina (Bell Tower and Astronomical Clock (Orologio Astronomico) & Duomo di Messina). And it doesn't end there: wander the streets of Cefalu Coast, enjoy the sand and surf at Piscina di Venere, steep yourself in history at Villa Romana del Casale, and see some colorful creatures with a scuba or snorkeling tour.

To see other places to visit, photos, topicsMoreInfo.option.ratings, and tourist information, refer to the Cefalu holiday maker site .

If you are flying in from United States, the closest major aiports are Falcone–Borsellino Airport, Catania-Fontanarossa Airport and Comiso Airport. Cap off your sightseeing on the 27th (Sat) early enough to travel back home.
more less