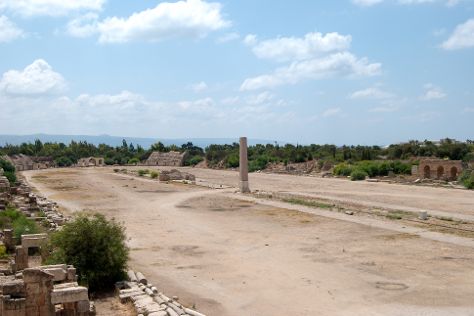 Do some cultural sightseeing at Temples of Baalbek and Mim Museum - Mineral Museum. You'll get in some beach time at Tyre Beach and White Beach. Explore Beirut's surroundings by going to Sur (Roman Hippodrome & Tyre), Anjar (Cardo Maximus (Aanjar) & Umayyad Ruins of Aanjar) and Tyre Hippodrome (in Tyre). And it doesn't end there: get to know the fascinating history of Baalbek Roman Ruins, get a new perspective on nature at American University of Beirut Museum, take in the spiritual surroundings of Deir Qozhaya, and pause for some serene contemplation at Saint John-Marc Cathedral.

If you are flying in from United States, the closest major aiport is Beirut Rafic Hariri International Airport. In September, daily temperatures in Beirut can reach °F, while at night they dip to °F. Finish your sightseeing early on the 16th (Wed) so you can travel back home.
more less