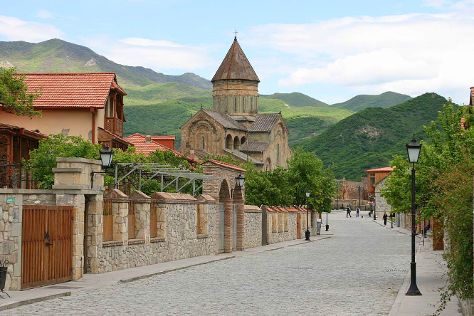 Get some historical perspective at Ananuri Fortified Castle Ensemble and Mtatsminda Pantheon. Shop till you drop at Chacha Corner and Yuliko & Friends Concept Store. Explore Tbilisi's surroundings by going to Ikalto Monastery Complex (in Ikalto), Tsinandali Palace (in Tsinandali) and Mtskheta (The City-Museum Reserve of Mtskheta & Samtavro Church). There's lots more to do: contemplate in the serene atmosphere at Sioni Church, get a taste of the local shopping with Fotografia, don't miss a visit to Agmashenebeli Avenue, and take in the architecture and atmosphere at Kashveti Church.

For reviews, ratings, where to stay, and tourist information, go to the Tbilisi planner.

Ulaanbaatar, Mongolia to Tbilisi is an approximately 20-hour flight. You can also drive; or do a combination of train and bus. Traveling from Ulaanbaatar to Tbilisi, you'll gain 4 hours due to the time zone difference. When traveling from Ulaanbaatar in October, plan for somewhat warmer days in Tbilisi, with highs around 20°C, while nights are much hotter with lows around 11°C. Wrap up your sightseeing on the 10th (Thu) early enough to travel to Batumi.
more less

©
The City-Museum Reserve of Mtskheta

Having invested heavily in tourism since 2010, Batumi is quickly becoming a go-to destination for visitors looking for a bustling nightlife.

On the 11th (Fri), take in the dramatic scenery at Makhuntseti Waterwall, shop like a local with Ethnographic Museum "Borjgalo", and then get outside with Mtirala National Park. Get ready for a full day of sightseeing on the 12th (Sat): contemplate the long history of Bridge Mahuntseti, then stroll through Kobuleti Beach, then make a trip to Petra Fortress, and finally take in the architecture and atmosphere at Church of St. Nicholas.

You can fly from Tbilisi to Batumi in 3 hours. Other options are to drive; or take a train. Plan for somewhat warmer nights when traveling from Tbilisi in October since evenings lows in Batumi dip to 15°C. Finish your sightseeing early on the 12th (Sat) so you can travel back home.
more less

Things to do in Batumi