7 days in Province of Alicante Itinerary

7 days in Province of Alicante Itinerary

©
On the 26th (Thu), make a trip to Fundacion Cultural Ithaca, trek along Peñón de Ifac Natural Park, then get outside with The Inn on the Green, and finally delve into the distant past at Denia Castle and Archaeological Museum. Here are some ideas for day two: pause for some serene contemplation at Parroquia Purissima Xiqueta i Sant Pere Apostol, enjoy the sand and surf at Playa del Arenal, and then get the adrenaline pumping with an extreme tour.

London, UK to Denia is an approximately 8.5-hour flight. You can also do a combination of train and bus; or do a combination of car and train. Due to the time zone difference, you'll lose 1 hour traveling from London to Denia. Plan for a bit warmer temperatures traveling from London in December, with highs in Denia at 19°C and lows at 8°C. Cap off your sightseeing on the 27th (Fri) early enough to go by car to Alicante.
more less

Things to do in Denia 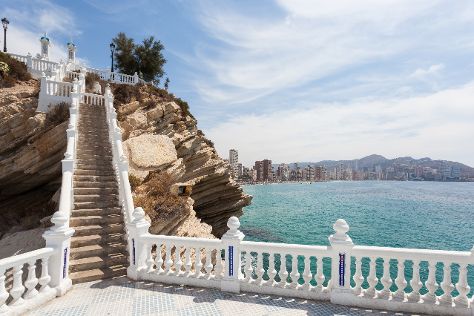 As Valencia’s second largest city and one of the most well-known along the Costa Blanca, Alicante has an enchanting atmosphere that blends rich history with animated beach life.

To see traveler tips, maps, more things to do, and more tourist information, use the Alicante trip itinerary website.

Traveling by car from Denia to Alicante takes 1.5 hours. Alternatively, you can do a combination of train and tram. In December, daytime highs in Alicante are 20°C, while nighttime lows are 8°C. Finish your sightseeing early on the 31st (Tue) so you can travel back home.
more less

Things to do in Alicante