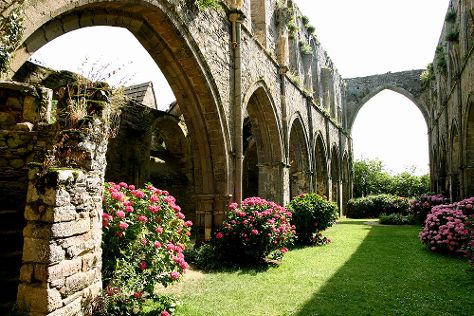 ©
Paimpol is a commune in the Côtes-d'Armor department in Brittany in northwestern France.It is a tourist destination, especially during the summer months when people are attracted by its port and beaches.PopulationInhabitants of Paimpol are called paimpolais in French.Breton languageThe municipality launched a linguistic plan through Ya d'ar brezhoneg on 29 September 2008.In 2008, 11.8% of primary school children attended bilingual schools.TransportThe Gare de Paimpol is connected by trains to Gare de Guingamp with the Paris-Montparnasse–Brest line.SightsBlue and white striped-jumpers are immediately visible in the streets and are seen to reflect not only their pride in all things to do with the sea, but also in their région, Brittany.The town centre leads from the port down to the coast, through cobbled streets filled with restaurants, cafés and bars. Your inner history buff will appreciate Abbaye de Beauport and Fort La Latte. Your cultural itinerary includes sights like Grand Site Naturel de Ploumanac'h and Chateau du Taureau. Get out of town with these interesting Paimpol side-trips: Perros-Guirec (Sentier des douaniers & Notre Dame de la Clarte), Plevenon (Phare du Cap Fréhel & Cap Fréhel) and Cathedrale Saint-Etienne (in Saint-Brieuc). Spend the 22nd (Fri) exploring the fascinating underwater world at Oceanopolis. Next up on the itinerary: enjoy the sea views from Ploumanac'h LIghthouse, take in the architecture and atmosphere at Eglise Saint-Etienne de Plouezoc'h, hike along Circuit de la pointe de l'Arcouest, and take in the spiritual surroundings of Enclos Paroissial de Guimiliau.

To see other places to visit, where to stay, reviews, and more tourist information, refer to the Paimpol trip itinerary maker tool.

In May, daytime highs in Paimpol are 17°C, while nighttime lows are 10°C. Cap off your sightseeing on the 25th (Mon) early enough to travel back home.
more less

Things to do in Paimpol