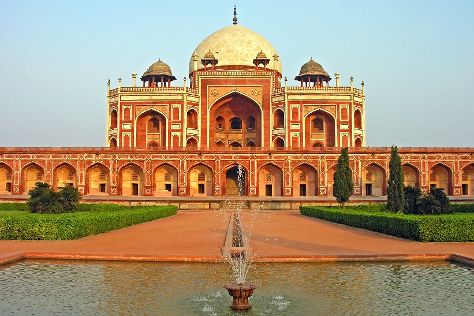 Deepen your sense of the past at sights like Humayun's Tomb and Birla Mandir Temple (Lakshmi Narayan). Bring the kids along to Sai Ka Angan Temple and Adventure Island. Explore New Delhi's surroundings by going to Shipra Mall (in Ghaziabad), Gurugram (Gurgaon) (SMAAASH & Sultanpur National Park) and Worlds of Wonder (in Noida). And it doesn't end there: wander the streets of Hauz Khas Village, let little ones run wild at Children's Park, have fun at Dr. Karni Singh Shooting Range, and admire the landmark architecture of Rashtrapati Bhavan.

For other places to visit, reviews, photos, and other tourist information, refer to the New Delhi trip itinerary builder website .

If you are flying in from United Kingdom, the closest major airport is Indira Gandhi International Airport. In April, daily temperatures in New Delhi can reach 43°C, while at night they dip to 25°C. Finish your sightseeing early on the 9th (Thu) to allow enough time to travel back home.
more less