On the 27th (Thu), steep yourself in history at St. Peter's Basilica, then get to know the fascinating history of Piazza Navona, then explore the ancient world of Palatine Hill, and finally steep yourself in history at Colosseum. On the 28th (Fri), you'll have a packed day of sightseeing: explore the world behind art at Vatican Museums, admire the striking features of Pantheon, then take in the spiritual surroundings of Chiesa di Sant'Ignazio di Loyola, and finally get to know the fascinating history of Centro Storico Associazione Centro Storico.

To see reviews, other places to visit, ratings, and other tourist information, refer to the Rome online trip itinerary planner .

Paris, France to Rome is an approximately 5.5-hour combination of train, bus, and flight. You can also fly; or drive. While traveling from Paris, expect a bit warmer days and about the same nights in Rome, ranging from highs of 16°C to lows of 4°C. Wrap up your sightseeing on the 28th (Fri) early enough to take a train to Florence.
more less 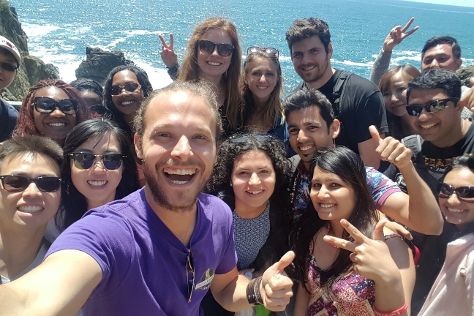 On the 29th (Sat), awaken your taste buds at Italy on a Budget Tours, admire the masterpieces at Uffizi Galleries, and then contemplate in the serene atmosphere at The Baptistery of St. John. On the 30th (Sun), you'll have a packed day of sightseeing: pause for some serene contemplation at Cathedral of Santa Maria del Fiore, explore the world behind art at Pitti Palace, take some stellar pictures from Piazzale Michelangelo, then take some stellar pictures from Basilica San Miniato al Monte, and finally see the interesting displays at Galleria dell'Accademia.

To find reviews, where to stay, photos, and other tourist information, you can read our Florence holiday planner .

Getting from Rome to Florence by train takes about 1.5 hours. Other options: drive; or fly. In December, plan for daily highs up to 15°C, and evening lows to 4°C. Wrap up your sightseeing on the 30th (Sun) early enough to take a train to Venice.
more less

©
Italy on a Budget Tours

You can take a train from Florence to Venice in 2.5 hours. Alternatively, you can drive; or take a bus. Traveling from Florence in December, things will get slightly colder in Venice: highs are around 11°C and lows about 1°C. Wrap up your sightseeing by early afternoon on the 1st (Tue) to allow time for travel back home.
more less