Change things up with these side-trips from Geneva: Roman Columns (in Nyon) and l'Arboretum National du Vallon de l'Aubonne (in Aubonne). There's lots more to do: explore the activities along Lake Geneva, appreciate the history behind Reformation Wall (Mur de la Reformation), take some stellar pictures from Cathedrale de St-Pierre, and get curious at CERN.

To see other places to visit, reviews, photos, and other tourist information, read Geneva trip planner.

Busan, South Korea to Geneva is an approximately 18-hour flight. Traveling from Busan to Geneva, you'll gain 8 hours due to the time zone difference. Traveling from Busan in October, expect Geneva to be little chillier, temps between 19°C and 9°C. Wrap up your sightseeing on the 7th (Wed) early enough to drive to Montreux.
more less 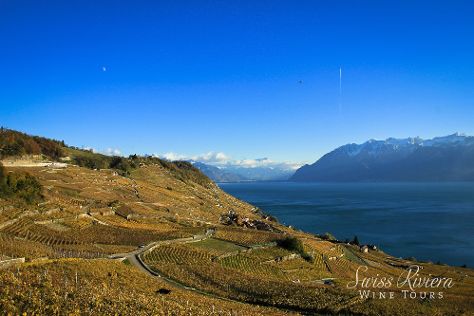 For reviews, other places to visit, maps, and tourist information, read our Montreux trip planning website.

You can drive from Geneva to Montreux in 1.5 hours. Alternatively, you can take a train. Finish your sightseeing early on the 14th (Wed) to allow enough time to drive to Bern.
more less

Explore the numerous day-trip ideas around Bern: Interlaken (Harderkulm & Parasailing & Paragliding), Skydive Interlaken (in Wilderswil) and Aare Gorge (in Meiringen). There's still lots to do: contemplate the waterfront views at Lake Brienz, admire the striking features of The Cathedral of Bern, delve into the lush surroundings at Creux du Van, and tour the pleasant surroundings at Gurten.

You can drive from Montreux to Bern in 1.5 hours. Alternatively, you can take a train; or do a combination of train and bus. Expect a daytime high around 18°C in October, and nighttime lows around 6°C. Wrap up your sightseeing on the 21st (Wed) to allow time to drive to Grindelwald.
more less

You'll find plenty of places to visit near Grindelwald: Giessbachfälle (in Brienz) and Oeschinen Lake (in Kandersteg). Next up on the itinerary: take in the awesome beauty at Jungfraujoch, tour the pleasant surroundings at North face Trail, hit the slopes at Maennlichen, and hike along The Eiger.

To find ratings, more things to do, maps, and tourist information, refer to the Grindelwald trip itinerary maker site.

Traveling by car from Bern to Grindelwald takes 1.5 hours. Alternatively, you can take a train; or take a bus. Finish your sightseeing early on the 26th (Mon) to allow enough time to drive to Zermatt.
more less

Venture out of the city with trips to Saaser Museum (in Saas-Fee), Baroque Church (in Saas-Balen) and Parc naturel Pfyn-Finge (in Sierre). There's still lots to do: take your sightseeing to a higher altitude at The Matterhorn, trek along Murmelweg Wanderung, take in the pleasant sights at Hinterdorfstrasse, and make a trip to Matterhorn Museum - Zermatlantis.

To see reviews, more things to do, other places to visit, and tourist information, use the Zermatt road trip planner.

Drive from Grindelwald to Zermatt in 3.5 hours. Alternatively, you can take a train; or do a combination of bus and train. Wrap up your sightseeing on the 2nd (Mon) to allow time to take a train to Brig.
more less

©
Brig, officially Brig-Glis is a historic town and a municipality in the district of Brig in the canton of Valais in Switzerland.The current municipality was formed in 1972 through the merger of Brig, Brigerbad and Glis.Together with other Alpine towns Brig-Glis engages in the Alpine Town of the Year Association for the implementation of the Alpine Convention to achieve sustainable development in the Alpine Arc.Brig-Glis was awarded Alpine Town of the Year 2008.The official language of Brig is German, but the main spoken language is the local variant of the Alemannic Swiss German dialect.HistoryThe name Brig is derived from Briva, or "bridge." Its older houses are very Italian in appearance, while its most prominent buildings (Stockalper Palace, former Jesuits' college and Ursuline convent) all date from the 17th century, and are due to the generosity of a single member of the local Stockalper family, the baron Kaspar Stockalper.The prosperity of Brig is bound up with the Simplon Pass, so that it gradually supplanted the more ancient village of Naters opposite, becoming a separate parish (the church is at Glis, a few minutes from the town) in 1517. Explore the numerous day-trip ideas around Brig: Wengen (Wengen Mannlichen Aerial Cableway & Molitor), Luftseilbahnen Fiesch-Eggishorn AG (in Fiesch in Valais) and Ernen (Pfarrkirche Ernen & Hangebrucke Furgangen-Muhlebach). The adventure continues: take in the dramatic natural features at Aletsch Glacier, take a memorable drive along Furka Pass, trek along Alpine Trails, and tour the pleasant surroundings at Chemin Pedestre de la Rampe Sud du Lotschberg.

Traveling by train from Zermatt to Brig takes 2 hours. Alternatively, you can do a combination of train and bus. In November, daytime highs in Brig are 8°C, while nighttime lows are 0°C. Wrap up your sightseeing on the 7th (Sat) early enough to drive to Lugano.
more less

Change things up with these side-trips from Lugano: Cascata della Piumogna (in Faido), Chiesa dei Santi Pietro e Paolo (Church of Saints Peter and Paul) (in Quinto) and St Gotthard Pass (in Airolo). There's much more to do: explore the activities along Lake Lugano, pause for some serene contemplation at Chiesa di Santa Maria di Loreto, don't miss a visit to Piazza G. Motta, and explore the ancient world of Monte San Giorgio.

For more things to do, where to stay, reviews, and other tourist information, read our Lugano trip planner.

You can drive from Brig to Lugano in 3 hours. Expect somewhat warmer temperatures when traveling from Brig in November; daily highs in Lugano reach 14°C and lows reach 4°C. Finish your sightseeing early on the 14th (Sat) so you can travel to Appenzell.
more less

©
Appenzell District is a district of the canton of Appenzell Innerrhoden in Switzerland. Explore Appenzell's surroundings by going to Kirchturm Heiden (in Heiden), Kanuschule Versam (in Versam) and Castle Haldenstein (in Haldenstein). Next up on the itinerary: don't miss a visit to Berggasthaus Aescher - Wildkirchli, get outside with Hoher Kasten, take your sightseeing to a higher altitude at Kronberg, and see the interesting displays at Appenzeller Volkskunde-Museum Stein AR.

For other places to visit, more things to do, where to stay, and tourist information, refer to the Appenzell travel route builder app.

Drive from Lugano to Appenzell in 3 hours. Expect a bit cooler weather when traveling from Lugano in November: highs in Appenzell hover around 10°C, while lows dip to 3°C. Wrap up your sightseeing on the 20th (Fri) to allow time to drive to Zurich.
more less

Things to do in Appenzell

Venture out of the city with trips to Rhine Falls (in Neuhausen am Rheinfall), Lucerne (Altstadt Luzern, Hofkirche, &more) and Uferpromenade Weggis (in Weggis). The adventure continues: explore the activities along Lake Zurich, identify plant and animal life at Mt Pilatus, take in the awesome beauty at Uetliberg Mountain, and take a stroll through Old Town.

For more things to do, where to stay, maps, and other tourist information, read Zurich online route maker.

Getting from Appenzell to Zurich by car takes about 1.5 hours. In November, daily temperatures in Zurich can reach 10°C, while at night they dip to 3°C. Finish your sightseeing early on the 28th (Sat) to allow enough time to travel back home.
more less