©
Carrick-on-Shannon is the county town of County Leitrim in the Republic of Ireland. You'll discover tucked-away gems like Town and Country Interiors Athleague and Liptons Clones. Roscommon County Museum and The Claypipe Visitor Centre will appeal to museum buffs. Get out of town with these interesting Carrick-on-Shannon side-trips: Bear Essentials/Silver Bear Centre (in Bawnboy), Drumanone Portal Tomb (in Boyle) and Sacred Heart Church (in Roscommon). Next up on the itinerary: take in the spiritual surroundings of Multyfarnham Friary, take an in-depth tour of Glenview Folk Museum, sample the tasty concoctions at Carrig Brewing Company, and take in the architecture and atmosphere at St Mel's Cathedral.

Columbus, USA to Carrick-on-Shannon is an approximately 15.5-hour flight. The time zone changes from Eastern Standard Time (EST) to Greenwich Mean Time (GMT), which is usually a 5 hour difference. Plan for a bit warmer temperatures traveling from Columbus in January, with highs in Carrick-on-Shannon at 43°F and lows at 36°F. Finish your sightseeing early on the 5th (Sat) so you can travel to Ardara.
more less

Things to do in Carrick-on-Shannon 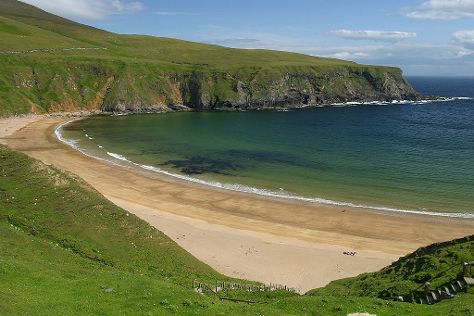 Ardara, pronounced "Ardra", is a small town in County Donegal, Ireland. Explore hidden gems such as Silver Strand Beach and Stephen Bennett Studio Gallery. Let the collections at Ballagh Studio and Glebe House & Gallery The Derek Hill Collection capture your imagination. Change things up with these side-trips from Ardara: Rossnowlagh Beach (in Rossnowlagh), Muckross Head Peninsula (in Kilcar) and Carrickfin Strand (in Annagry). The adventure continues: enjoy the sand and surf at Narin Beach, look for gifts at John Molloy Limited, tour the pleasant surroundings at Five Fingers Strand, and revel in the low prices at Kennedy of Ardara.

Traveling by car from Carrick-on-Shannon to Ardara takes 2 hours. In January, daytime highs in Ardara are 46°F, while nighttime lows are 41°F. Wrap up your sightseeing on the 10th (Thu) early enough to travel to Sligo.
more less

Things to do in Ardara 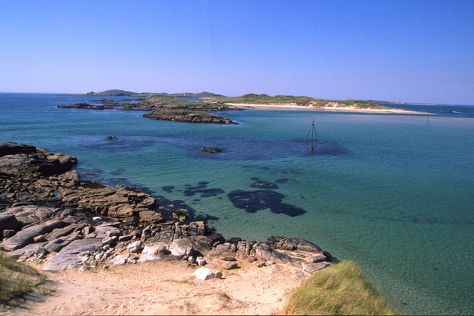 Despite its small size, Sligo serves as a major center of culture, commerce, and entertainment in the northwestern section of Ireland.

Popular historic sites such as Manorhamilton Castle and Creevykeel Court Tomb are in your itinerary. Step out of the city life by going to Carrowmore Beach and Dunmoran Strand. Explore the numerous day-trip ideas around Sligo: Hennigan's Heritage Centre (in Swinford), Ross Beach (in Killala) and Ballina (Fr. Peyton C.S.C. Memorial Centre & Rosserk Friary). And it doesn't end there: take in the exciting artwork at Hazelwood House, get answers to all your questions at Coleman Music Centre, enjoy the sand and surf at Streedagh Beach, and stop by The Cat and Moon.

Plan a trip to Sligo easily and quickly by telling Inspirock to suggest an itinerary.

You can drive from Ardara to Sligo in 1.5 hours. In January in Sligo, expect temperatures between 45°F during the day and 40°F at night. Cap off your sightseeing on the 16th (Wed) early enough to go by car to Galway.
more less

Things to do in Sligo

Visiting Cliffs of Moher and Fanore Beach will get you outdoors. You'll explore the less-touristy side of things at McKernan Woollen Mills and The Celtic T Shirt Shop. Change things up with these side-trips from Galway: Burren National Park (in Corofin), Ennis (Sceal Eile Books, Chapel Lane Market, & more) and Standun (in Spiddal). There's lots more to do: look for gifts at OMG Zhivago, stroll through White Strand Beach, enjoy the sand and surf at Spanish Point Beach, and don't miss a visit to Gleninsheen Wedge Tomb.

To find reviews, photos, and tourist information, use the Galway visit site .

Traveling by car from Sligo to Galway takes 2 hours. Alternatively, you can take a bus. January in Galway sees daily highs of 43°F and lows of 36°F at night. Wrap up your sightseeing on the 20th (Sun) to allow time to drive to Clifden.
more less 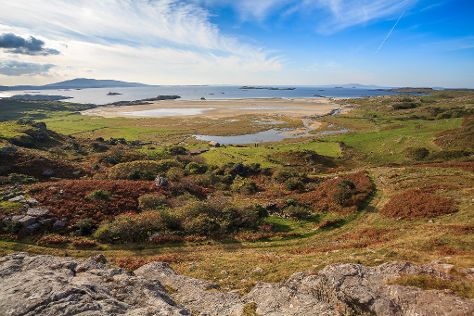 The town of Clifden represents a beloved Victorian style and is known for its position along County Galway's coast.

Head to Cottage Handcrafts and Roundstone Ceramicsfor some retail therapy. Satisfy your inner culture vulture at Kylemore Abbey & Victorian Walled Garden and Joyce's Craft Shop and Art Gallery. You'll find plenty of places to visit near Clifden: Glassilaun Beach (in Leenane), The Great Western Greenway (in Westport) and Mulranny Strand (in Mulranny). There's lots more to do: kick back and relax at Aillebrack Green Coast Beach, look for gifts at Clifden Bookshop, buy something for everyone on your list at Hehirs Of Clifden, and stroll through Mannin Bay Blueway.

Traveling by car from Galway to Clifden takes 1.5 hours. Alternatively, you can take a bus. Cap off your sightseeing on the 26th (Sat) early enough to travel to Castletownbere.
more less

Things to do in Clifden

©
Get in touch with nature at Ballinskelligs Beach and Ballyrisode Beach. Shop till you drop at The Great & Co and Brushwood Studios. Explore Castletownbere's surroundings by going to Uragh Stone Circle (in Tuosist), The WhiteHouse Gallery (in Kilcrohane) and Skellig Gift Store (in Waterville).

You can drive from Clifden to Castletownbere in 5.5 hours. In January, daily temperatures in Castletownbere can reach 48°F, while at night they dip to 41°F. Finish your sightseeing early on the 29th (Tue) so you can travel to Dingle.
more less

Things to do in Castletownbere 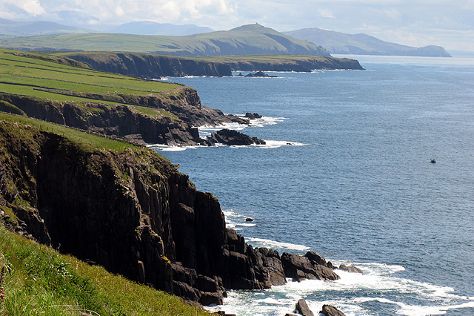 Get some cultural insight at The Carol Cronin Gallery and Original Kerry Craft Centre. Museum-lovers will get to explore Penny's Pottery and Dingle Artworks. Get out of town with these interesting Dingle side-trips: Cahersiveen (The Anchor & Leacanabuaile Fort) and Kilbaha Gallery & Crafts (in Kilbaha). Spend the 4th (Mon) exploring the striking scenery along Slea Head Drive. There's much more to do: look for gifts at John Weldon Jewellers, tour the pleasant surroundings at Ventry Beach, take your sightseeing to a higher altitude at Mount Brandon, and browse the range of quality goods at Strand House Cafe.

Getting from Castletownbere to Dingle by car takes about 3 hours. In January, daytime highs in Dingle are 48°F, while nighttime lows are 41°F. Finish up your sightseeing early on the 4th (Mon) so you can go by car to Killarney.
more less

Things to do in Dingle

Escape the urban bustle at Torc Waterfall and Ladies Beach. Head to Skyline Gallery and Peter Cox Photography Galleryfor plenty of shopping. Change things up with these side-trips from Killarney: Belgians Chocolatier (in Tralee), The Nuns Beach (in Ballybunion) and Kilkee Beach (in Kilkee). Spend the 7th (Thu) exploring nature at Killarney National Park. The adventure continues: appreciate the views at Gap of Dunloe, shake up your sightseeing with a climbing tour, explore the historical opulence of Ross Castle, and look for gifts at Kerry Woollen Mills.

To see more things to do, other places to visit, and other tourist information, read Killarney online trip itinerary builder .

Drive from Dingle to Killarney in 1.5 hours. Alternatively, you can take a bus. In February, daily temperatures in Killarney can reach 47°F, while at night they dip to 38°F. Wrap up your sightseeing on the 9th (Sat) to allow time to drive to Cork.
more less

Things to do in Killarney

One of the country's major artistic and cultural centers, famed for its many annual festivals, Cork straddles the Lee River and boasts over 30 bridges.

Let the collections at Kinsale Pottery and Arts Centre and The Gallery Kinsale capture your imagination. Get outdoors at Fota Wildlife Park and Inchydoney Beach. Explore the numerous day-trip ideas around Cork: Coolavokig Pottery (in Macroom) and Kinsale (Aunty Nellie's Sweet Shop Kinsale, Koko, & more). The adventure continues: browse the eclectic array of goods at The English Market, browse the different shops at Wilton Shopping Centre, take an in-depth tour of Cork City Gaol, and look for gifts at Records and Relics.

To find maps, ratings, and other tourist information, refer to the Cork attractions website .

You can drive from Killarney to Cork in 1.5 hours. Other options are to take a bus; or take a train. In February, daytime highs in Cork are 46°F, while nighttime lows are 35°F. Finish up your sightseeing early on the 14th (Thu) so you can travel to Ardmore.
more less

Things to do in Cork 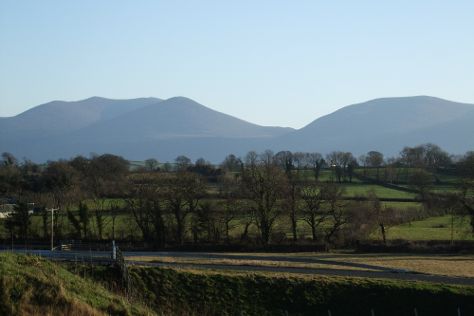 ©
Ardmore is a seaside resort and fishing village in County Waterford, Ireland, not far from Youghal on the south coast of Ireland, with a population of around 330, although this varies with the tourist season. Step out of the city life by going to Woodstown Strand and Knockmealdown Mountains. Let the collections at Ardmore Pottery & Gallery and Jack O'Patsy Pottery capture your imagination. Venture out of the city with trips to The Vee (in Clogheen), Stephen Pearce (in Shanagarry) and Ballysaggartmore Towers (in Lismore). And it doesn't end there: stop by Criostal na Rinne, take in the architecture and atmosphere at Ardmore Round Tower, take in the spiritual surroundings of Mount Melleray Abbey, and take in the exciting artwork at Brigid Shelly Gallery.

You can drive from Cork to Ardmore in an hour. In February in Ardmore, expect temperatures between 47°F during the day and 39°F at night. Finish your sightseeing early on the 17th (Sun) to allow enough time to travel to Kilkenny.
more less

Things to do in Ardmore 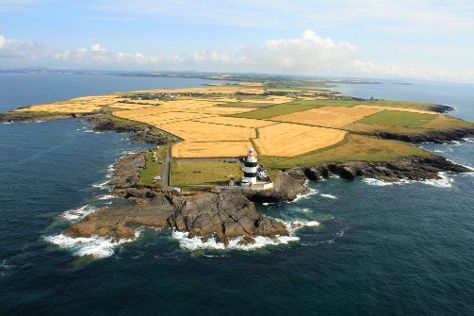 You'll discover tucked-away gems like Rock of Cashel and Olde Shillelagh Stick Maker. Get some cultural insight at Hook Lighthouse and St. Canice's Cathedral & Round Tower. You'll find plenty of places to visit near Kilkenny: Ahenny High Crosses (in Tipperary), Ormond Castle (in Carrick-on-Suir) and New Ross Books (in New Ross). There's much more to do: look for gifts at Cushendale Woollen Mills, get a taste of the local shopping with The Gaslamp Gallery, explore the historical opulence of Kilkenny Castle, and take your sightseeing to a higher altitude at Mount Leinster.

For photos, other places to visit, more things to do, and other tourist information, read our Kilkenny trip itinerary planner .

You can drive from Ardmore to Kilkenny in 1.5 hours. In February, daytime highs in Kilkenny are 47°F, while nighttime lows are 39°F. Finish up your sightseeing early on the 22nd (Fri) so you can go by car to Dublin.
more less

Things to do in Kilkenny

A history spanning over a thousand years, vibrant nightlife, and a mix of Georgian and modern architecture make Dublin a popular European tourist destination.

Do some cultural sightseeing at Grafton Street and Temple Bar. Let the collections at Kilmainham Gaol and Gallery of Photography capture your imagination. Explore the numerous day-trip ideas around Dublin: Bru na Boinne (in Donore) and Wicklow Mountains National Park (in Glendalough Village). There's still lots to do: sample the tasty concoctions at Guinness Storehouse, see the interesting displays at Croke Park Stadium Tour & GAA Museum, contemplate in the serene atmosphere at Saint Patrick's Cathedral, and admire the masterpieces at Chester Beatty Library.

For photos, more things to do, reviews, and tourist information, refer to the Dublin road trip planning website .

You can drive from Kilkenny to Dublin in 1.5 hours. Alternatively, you can take a train; or take a bus. Traveling from Kilkenny in February, you can expect nighttime temperatures to be a bit cooler in Dublin, with lows of 34°F. Wrap up your sightseeing by early afternoon on the 1st (Fri) to allow enough time to travel back home.
more less

Things to do in Dublin