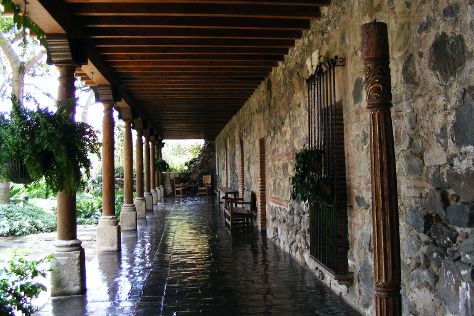 The former capital of Guatemala and a World Heritage Site, Antigua retains its colonial charm and remains one of the most visited destinations in the country.

Venture out of the city with trips to Guatemala City (National Museum of Archaeology and Ethnology, Museo Popol Vuh, &more). And it doesn't end there: indulge in some culinary diversions at Taste Antigua, steep yourself in history at Casa Popenoe, get impressive views of Volcan de Agua, and explore the ancient world of Convento de las Capuchinas.

For other places to visit, photos, traveler tips, and other tourist information, read Antigua journey builder.

Melbourne, Australia to Antigua is an approximately 27-hour flight. The time zone difference when traveling from Melbourne to Antigua is minus 16 hours. In March in Antigua, expect temperatures between 30°C during the day and 13°C at night. Cap off your sightseeing on the 5th (Fri) early enough to travel to San Pedro.
more less

Things to do in Antigua

Guatemala City
Highlights from your plan

San Pedro evolved from small fishing village and now represents one of the most visited locations in Belize.

To find photos, maps, where to stay, and more tourist information, go to the San Pedro driving holiday app.

Traveling by flight from Antigua to San Pedro takes 7.5 hours. Alternatively, you can do a combination of taxi, bus, and ferry; or do a combination of shuttle, bus, and ferry. In March, San Pedro is a bit warmer than Antigua - with highs of 34°C and lows of 26°C. Finish your sightseeing early on the 11th (Thu) so you can fly to Placencia.
more less

Things to do in San Pedro 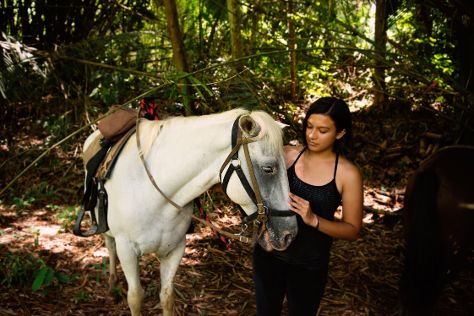 Once a humble fishing village, Placencia has been transformed into a leading tourist destination, with its focus primarily on outdoor activity and natural exploration.

Things to do in Placencia

The largest of the Bay Islands, Roatan is the most developed and the most popular among its neighbors.

Roatan is known for wildlife, beaches, and adventure. Your plan includes some of its best attractions: discover the deep blue sea with Clearwater Adventures, admire the natural beauty at Carambola Gardens, stop by Karma Jewelry Design, and enjoy the sand and surf at West Bay Beach.

For where to stay, more things to do, reviews, and tourist information, you can read our Roatan trip planner.

Things to do in Roatan 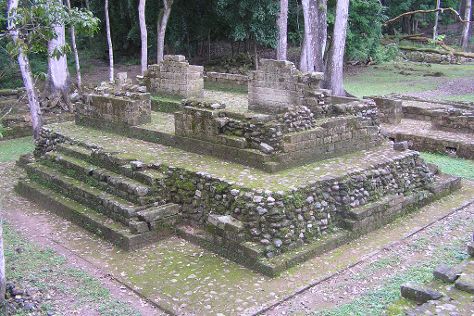 Copan Ruinas is known for historic sites, parks, and museums. Your plan includes some of its best attractions: explore the ancient world of Copan Ruinas, see the interesting displays at Sculpture Museum, take in the natural beauty of Luna Jaguar Hot Spring, and don't miss a visit to Hieroglyphic Stairway.

For reviews, where to stay, photos, and more tourist information, you can read our Copan Ruinas trip itinerary site.

Things to do in Copan Ruinas

Get out of town with these interesting San Salvador side-trips: Santa Ana (Santa Ana Volcano & Izalco Volcano). Next up on the itinerary: take in the local highlights with EC Tours El Salvador, pause for some serene contemplation at Iglesia El Rosario, have fun and explore at Tin Marin Children's Museum, and contemplate the waterfront views at Lake Ilopango.

Traveling by car from Copan Ruinas to San Salvador takes 4.5 hours. Alternatively, you can do a combination of car and bus. Traveling from Copan Ruinas in March, expect nights in San Salvador to be about the same, around 23°C, while days are somewhat warmer, around 38°C. Finish your sightseeing early on the 31st (Wed) so you can travel to Manuel Antonio.
more less

Things to do in San Salvador

The rainforest meets the sea at Manuel Antonio National Park, a small but scenic natural preserve on the west coast of Costa Rica.

Start off your visit on the 1st (Thu): cross one thing off your bucket list with Skydive Costa Rica, then take a memorable tour with Tours, then soothe aching muscles at Yoga con Cyn, and finally look for gifts at Altair Souvenir & Gallery Shop. Here are some ideas for day two: enjoy the sand and surf at Playa Manuel Antonio and then take a tour by water with Boat Tours & Water Sports.

To see photos, other places to visit, maps, and tourist information, refer to the Manuel Antonio holiday site.

Traveling by flight from San Salvador to Manuel Antonio takes 6.5 hours. Alternatively, you can drive; or do a combination of bus and taxi. Finish your sightseeing early on the 2nd (Fri) so you can drive to Tortuguero.
more less

Things to do in Manuel Antonio

One of Costa Rica's least accessible destinations, Tortuguero sits within an eponymous national park and remains accessible only by plane or boat.

Kick off your visit on the 3rd (Sat): explore the striking landscape of Tortuguero National Park.

To find other places to visit and tourist information, you can read our Tortuguero route planning app.

Things to do in Tortuguero

Before you visit La Fortuna de San Carlos, use our trip planner to discover what you can do and see there.

You can drive from Tortuguero to La Fortuna de San Carlos in 3.5 hours. Other options are to take a shuttle; or do a combination of taxi and bus. Wrap up your sightseeing on the 9th (Fri) to allow time to drive to Monteverde.
more less

Things to do in La Fortuna de San Carlos

Monteverde is all about natural attractions, not surprising for an eco-tourism hotspot known for its cloud forests and rich diversity of animal life.

Monteverde is known for adventure, parks, and nightlife. Your plan includes some of its best attractions: stroll through Monteverde Cloud Forest Biological Reserve, experience rural life at El Trapiche Tour, admire the natural beauty at Monteverde Orchid Garden, and get to know the fascinating history of Santa Elena Skywalk.

Traveling by car from La Fortuna de San Carlos to Monteverde takes 3.5 hours. Alternatively, you can take a bus. Finish your sightseeing early on the 13th (Tue) so you can drive to Playa Samara.
more less

Things to do in Monteverde

A beach town with just enough development to be comfortable for families accustomed to the trappings of modern life, Playa Samara has the resorts you'd expect to find in such a scenic area, but they don't hinder the relaxing atmosphere.

Venture out of the city with trips to Nosara (Playa Guiones & SIBU Wildlife Sanctuary). The adventure continues: kick back and relax at Samara Beach, take a memorable tour with Wingnuts Canopy Tours, take a pleasant ride with a tour on horseback, and relax and rejuvenate at some of the best spas.

To find out how to plan a trip to Playa Samara, use our trip itinerary maker.

Traveling by car from Monteverde to Playa Samara takes 3 hours. Alternatively, you can take a bus. Finish up your sightseeing early on the 16th (Fri) so you can go by car to Tamarindo.
more less

Things to do in Playa Samara

Surfing remains the main reason to take a trip to Tamarindo, as the beachside town is mostly known for its excellent waves.

Get out of town with these interesting Tamarindo side-trips: Costa Rica Private Tours (in Liberia), Hacienda El Viejo Wetlands (in Area de Conservacion Guanacaste) and Playa Hermosa (in Playa Hermosa). The adventure continues: kick back and relax at Tamarindo Beach, find something for the whole family at Black Stallion Eco Park & Estates, tee off at Garra de Leon Golf Course, and get up close to creatures of the deep with a dolphin and whale watching tour.

For ratings, other places to visit, where to stay, and more tourist information, go to the Tamarindo trip itinerary website.

Traveling by car from Playa Samara to Tamarindo takes 2 hours. Alternatively, you can take a bus. Wrap up your sightseeing on the 20th (Tue) to allow time to drive to Granada.
more less

Things to do in Tamarindo 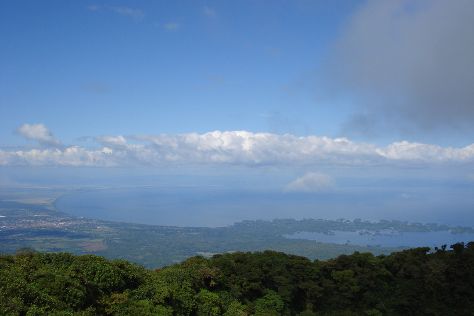 The lakeside city of Granada has the look and feel of a historically important economic and political center, with grand colonial architecture, a unified look, and many cultural attractions.

To see other places to visit, where to stay, and other tourist information, read our Granada itinerary maker.

Drive from Tamarindo to Granada in 4.5 hours. Alternatively, you can do a combination of bus and shuttle; or take a bus. Wrap up your sightseeing on the 22nd (Thu) early enough to travel to Panama City.
more less

Apoyo
Highlights from your plan

Panama City is known for historic sites, shopping, and museums. Your plan includes some of its best attractions: don't miss a visit to Panama Canal, appreciate the extensive heritage of Casco Viejo, explore the striking landscape of Metropolitan National Park, and snap pictures at Bridge of the Americas.

To see traveler tips, reviews, where to stay, and tourist information, use the Panama City trip itinerary maker app.

Fly from Granada to Panama City in 4.5 hours. Alternatively, you can drive; or do a combination of car and bus. The time zone difference moving from Central Standard Time to Eastern Standard Time is 1 hour. In April, daytime highs in Panama City are 38°C, while nighttime lows are 30°C. Cap off your sightseeing on the 27th (Tue) early enough to travel back home.
more less

Things to do in Panama City