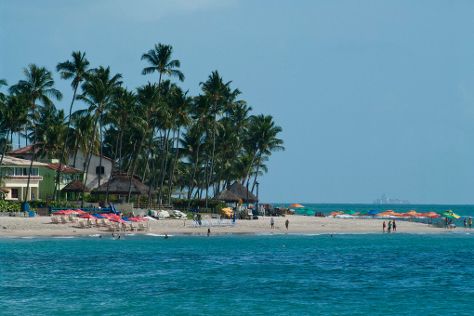 Hawaii of the Atlantic

You're in for a treat on your beach holiday to Porto de Galinha.

Porto de Galinhas is known for beaches, wildlife, and parks. Your plan includes some of its best attractions: kick back and relax at Vila de Porto de Galinhas Beach, identify plant and animal life at Projeto Hippocampus, tour the pleasant surroundings at Muro Alto Beach, and admire the striking features of Massangana Sugar Cane Mill.

To find photos, traveler tips, where to stay, and more tourist information, you can read our Porto de Galinhas trip maker.

Things to do in Porto de Galinhas 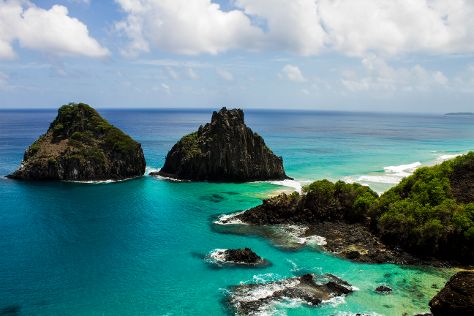 Fernando de Noronha is known for beaches, museums, and wildlife. Your plan includes some of its best attractions: get outside with Baia dos Porcos, enjoy the sand and surf at Baia do Sancho, stroll through Baia dos Golfinhos, and take in the architecture and atmosphere at Capela de Sao Pedro. 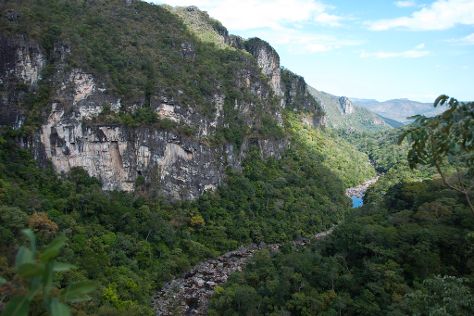 Developed from a 19th-century cattle ranch, Alto Paraiso de Goias serves as the major gateway to a World Heritage-listed national park known for containing some of the world's oldest natural rock formations.

Things to do in Alto Paraiso de Goias

Cachoeira do Segredo
Highlights from your plan

Brasilia is known for museums, shopping, and historic sites. Your plan includes some of its best attractions: admire the striking features of Catedral Metropolitana, take an in-depth tour of Memorial JK, take a peaceful walk through Flona - Floresta Nacional de Brasilia, and admire the natural beauty at Ecoparque Villa Giardini.

To see maps, reviews, ratings, and other tourist information, use the Brasilia trip planner.

Getting from Alto Paraiso de Goias to Brasilia by car takes about 3.5 hours. Other options: take a bus. You'll lose 1 hour traveling from Alto Paraiso de Goias to Brasilia due to the time zone difference. In July in Brasilia, expect temperatures between °C during the day and °C at night. Finish up your sightseeing early on the 21st (Tue) so you can travel to Foz do Iguacu.
more less

Land of the Waterfalls

A gateway to the world-renowned Iguacu Falls, which spectacularly divide Brazil and Argentina, the modern, high-rise city of Foz do Iguacu can't help but play second fiddle to the natural wonder in its vicinity.

Kick off your visit on the 22nd (Wed): take in the dramatic scenery at Iguazu Falls. Get ready for a full day of sightseeing on the 23rd (Thu): admire the engineering at Itaipu Dam, thentake in the spiritual surroundings of Buddhist Temple, and then learn about wildlife with up-close encounters at Parque das Aves Bird Park.

To see where to stay, ratings, more things to do, and more tourist information, refer to the Foz do Iguacu attractions planner.

Getting from Brasilia to Foz do Iguacu by flight takes about 5 hours. Other options: drive; or take a bus. When traveling from Brasilia in July, plan for slightly colder days in Foz do Iguacu, with highs around °C, while nights are about the same with lows around °C. Wrap up your sightseeing on the 23rd (Thu) to allow time to travel to Gramado.
more less

Things to do in Foz do Iguacu

Surrounded by impressive mountain scenery in the state of Rio Grande do Sul, the small city of Gramado charms visitors with its alpine European-style architecture and blossoming flowers.

Explore Gramado's surroundings by going to Porto Alegre (Parque Moinhos de Vento & Enigma Escape Game) and Felskopf Viewpoint (in Morro Reuter). Next up on the itinerary: explore the activities along Lago Negro, stop by Cristais de Gramado, take in the architecture and atmosphere at Igreja Matriz Sao Pedro Apostolo, and learn about winemaking at Casa Seganfredo.

To find reviews, maps, traveler tips, and other tourist information, use the Gramado online trip maker.

Traveling by flight from Foz do Iguacu to Gramado takes 6 hours. Alternatively, you can drive; or do a combination of bus, train, and taxi. Finish up your sightseeing early on the 27th (Mon) so you can go by car to Bento Goncalves.
more less

Things to do in Gramado

Founded in 1875, the young city of Bento Goncalves boasts a rich recent history and attractions that tastefully complement its surrounding natural features.

For photos, ratings, where to stay, and other tourist information, use the Bento Goncalves travel route planning site.

You can drive from Gramado to Bento Goncalves in 2 hours. Alternatively, you can take a bus. Wrap up your sightseeing on the 1st (Sat) early enough to travel to Curitiba.
more less

Things to do in Bento Goncalves 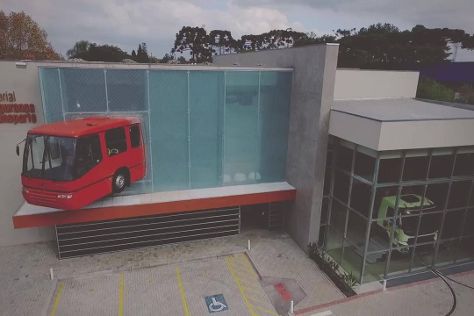 The word "Brazil" isn't often mentioned in the same breath as "excellent urban planning"--except in Curitiba.

Take a break from Curitiba with a short trip to Familia Fardo Vinicola in Quatro Barras, about 50 minutes away. Next up on the itinerary: take in nature's colorful creations at Jardim Botanico de Curitiba, stroll around Tangua Park, examine the collection at Memorial da Seguranca no Transporte, and cruise along Estrada Da Graciosa.

Traveling by flight from Bento Goncalves to Curitiba takes 6.5 hours. Alternatively, you can drive; or take a bus. In August, plan for daily highs up to °C, and evening lows to °C. Wrap up your sightseeing on the 5th (Wed) to allow time to travel to Sao Paulo.
more less

Things to do in Curitiba 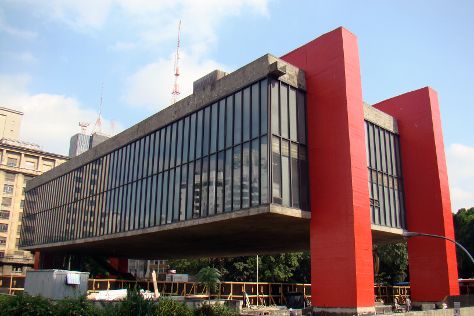 Don't let the city's nickname--"Land of Drizzle"--dampen your spirits during a trip to Sao Paulo.

Go for a jaunt from Sao Paulo to Guarulhos to see Spas about 36 minutes away. The adventure continues: walk around Parque Ibirapuera, examine the collection at Museu da Lingua Portuguesa, have some family-friendly fun at Pixel Realidade Virtual, and explore the world behind art at Museu de Arte de Sao Paulo Assis Chateaubriand - MASP.

To find out how to plan a trip to Sao Paulo, use our trip itinerary maker.

Fly from Curitiba to Sao Paulo in 4 hours. Alternatively, you can drive; or take a bus. When traveling from Curitiba in August, plan for somewhat warmer days in Sao Paulo, with highs around °C, while nights are about the same with lows around °C. Finish up your sightseeing early on the 10th (Mon) so you can go by car to Campos Do Jordao.
more less

Things to do in Sao Paulo

Spas
Highlights from your plan 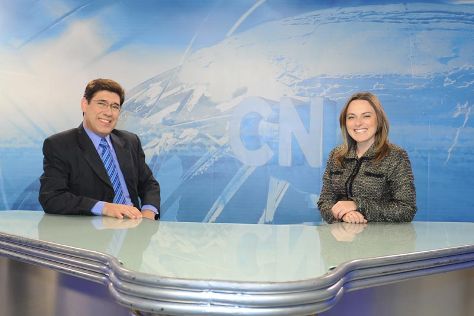 Venture out of the city with trips to Pico Agudo (in Santo Antonio do Pinhal), Cancao Nova (in Cachoeira Paulista) and Pedra do Bau (in Sao Bento do Sapucai). Next up on the itinerary: see Off-Road Tours, make a trip to Morro do Elefante, visit Vila Capivari, and stop by Maostiqueiras.

Plan my day in Campos Do Jordao using traveler tips and tourist information provided by Inspirock.

Things to do in Campos Do Jordao

A tumultuous and unsavory history has kept Ilha Grande relatively undeveloped and free of the trappings of the modern world.

Ilha Grande is known for beaches, nature, and wildlife. Your plan includes some of its best attractions: enjoy the sea views from Castelhanos Lighthouse, kick back and relax at Baleia Beach, stroll through Itaguacu Beach, and pause for some serene contemplation at Igreja de Sao Sebastiao.

To see where to stay, traveler tips, other places to visit, and more tourist information, use the Ilha Grande road trip planning app.

Traveling by combination of taxi, bus, and car from Campos Do Jordao to Ilha Grande takes 8 hours. Alternatively, you can take a bus. The time zone difference moving from Amazon Standard Time (AMT) to Brasilia Standard Time (BRT) is 1 hour. In August, daily temperatures in Ilha Grande can reach °C, while at night they dip to °C. Finish your sightseeing early on the 20th (Thu) to allow enough time to travel to Rio de Janeiro.
more less

Things to do in Ilha Grande 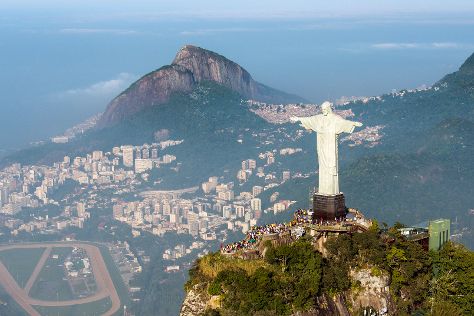 Rio de Janeiro is known for beaches, nightlife, and museums. Your plan includes some of its best attractions: appreciate the history behind Corcovado - Christ the Redeemer, take your sightseeing to a higher altitude at Pedra da Gavea, kick back and relax at Pedra do Arpoador, and admire the natural beauty at Jardim Botânico do Rio de Janeiro.

Traveling by bus from Ilha Grande to Rio de Janeiro takes 5 hours. Alternatively, you can do a combination of ferry, bus, and train. In August, daytime highs in Rio de Janeiro are °C, while nighttime lows are °C. Cap off your sightseeing on the 25th (Tue) early enough to go by car to Petropolis.
more less

Once the summer getaway of Brazilian emperors, the "imperial city" of Petropolis serves as a tribute to the lavish lifestyles of Brazil's 19th-century elite.

Start off your visit on the 26th (Wed): explore the world behind art at Museu de Porcelana de Petropolis, see the interesting displays at Museu Casa de Santos Dumont, thensample the tasty concoctions at Cervejaria Bohemia, thenexamine the collection at Imperial Museum, and finally don't miss a visit to Centro Historico de Petropolis. On the 27th (Thu), you'll have a packed day of sightseeing: indulge your thirst for a good beer at Cervejaria Brewpoint, thencontemplate in the serene atmosphere at Catedral de Sao Pedro de Alcantara, and then take in the dramatic natural features at Pedra do Sino.

To find reviews, traveler tips, photos, and other tourist information, you can read our Petropolis day trip app.

You can drive from Rio de Janeiro to Petropolis in 1.5 hours. Other options are to take a train; or take a bus. In August, daytime highs in Petropolis are °C, while nighttime lows are °C. Wrap up your sightseeing by early afternoon on the 28th (Fri) to allow time for travel back home.
more less

Things to do in Petropolis

Pedra do Sino
Highlights from your plan