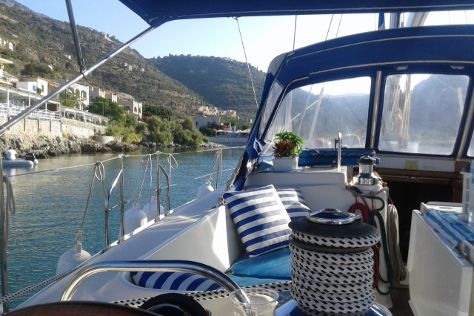 ©
Kalamata is the second most populous city of the Peloponnese peninsula, after Patras, in southern Greece and the largest city of the homonymous administrative region. On the 16th (Wed), pick up some new kitchen skills with Messinia Sailing.

Boston, USA to Kalamata is an approximately 15.5-hour flight. The time zone difference moving from Eastern Standard Time (EST) to Eastern European Standard Time (EET) is 7 hours. When traveling from Boston in May, plan for a bit warmer days in Kalamata, with highs around 77°F, while nights are about the same with lows around 54°F. Cap off your sightseeing on the 17th (Thu) early enough to travel to Kythira.
more less

To find traveler tips, more things to do, where to stay, and more tourist information, you can read our Kythira attractions planning app.

Explore your travel options from Kalamata to Kythira with the Route module. Finish up your sightseeing early on the 19th (Sat) so you can travel back home.
more less

Things to do in Kythira