Start off your visit on the 19th (Tue): take a stroll through Île de la Cité, stroll around Luxembourg Gardens, then explore the world behind art at Musee d'Orsay, and finally pause for some serene contemplation at Basilique du Sacre-Coeur de Montmartre. On the 20th (Wed), you'll have a packed day of sightseeing: contemplate the long history of Eiffel Tower, admire the striking features of Arc de Triomphe, and then admire the masterpieces at Louvre Museum.

To see where to stay, maps, other places to visit, and tourist information, use the Paris tour itinerary planner.

New York City, USA to Paris is an approximately 12- hour combination of train and flight. You can also do a combination of subway, train, and flight; or fly. You'll lose 6 hours traveling from New York City to Paris due to the time zone difference. Prepare for slightly colder weather when traveling from New York City in May: high temperatures in Paris hover around 64°F and lows are around 49°F. Cap off your sightseeing on the 20th (Wed) early enough to travel to Rome.
more less

On the 21st (Thu), ponder the design of Trevi Fountain, explore the ancient world of Pantheon, then make a trip to Piazza Navona, then steep yourself in history at St. Peter's Basilica, and finally contemplate the long history of Colosseum.

For ratings, where to stay, other places to visit, and tourist information, use the Rome online driving holiday planner.

Getting from Paris to Rome by flight takes about 5.5 hours. Other options: do a combination of flight and train; or drive. Traveling from Paris in May, things will get a bit warmer in Rome: highs are around 75°F and lows about 58°F. Finish your sightseeing early on the 21st (Thu) to allow enough time to travel to Hong Kong.
more less

Pearl of the Orient

Witness the vibrant skyline of Hong Kong, an impressive urban territory on the southern coast of China.

On the 23rd (Sat), take a leisurely stroll along Tsim Sha Tsui Promenade and then find something for the whole family at Hong Kong Disneyland.

For where to stay, photos, reviews, and other tourist information, go to the Hong Kong online travel route planner.

Traveling by flight from Rome to Hong Kong takes 16.5 hours. Alternatively, you can do a combination of flight and bus; or do a combination of flight, subway, and train. You'll lose 7 hours traveling from Rome to Hong Kong due to the time zone difference. Prepare for somewhat warmer weather when traveling from Rome in May: high temperatures in Hong Kong hover around 87°F and lows are around 78°F. Wrap up your sightseeing on the 23rd (Sat) early enough to travel to Seminyak.
more less

Things to do in Hong Kong

Theme Parks
Highlights from your plan

Explore the numerous day-trip ideas around Seminyak: Caow Eng Bio Chinese Buddhist Temple (in Tanjung Benoa), Nusa Dua Beach (in Nusa Dua) and Sanur (Pura Dalem Pengembak, Pantai Sanur, &more). There's much more to do: cool off at Waterbom Bali, wander the streets of Jimbaran Bay, stroll through Kuta Beach - Bali, and indulge in some personalized pampering at some of the best spas.

To see traveler tips, where to stay, more things to do, and tourist information, read Seminyak trip builder website.

Things to do in Seminyak

The island of Nusa Lembongan sits amidst swathes of calm, clear waters as well as some of the most notable surfing waves in the region.

Nusa Lembongan is known for wildlife, parks, and adventure. Your plan includes some of its best attractions: get outside with Outdoor Activities, take some stellar pictures from Shiroi Lookout, tour the pleasant surroundings at Jungut Batu Beach, and enjoy the sand and surf at Selambung Beach.

To find where to stay, photos, maps, and tourist information, you can read our Nusa Lembongan vacation planner.

Things to do in Nusa Lembongan

You'll find plenty of places to visit near Ubud: Bali Safari & Marine Park (in Gianyar), USS Liberty Shipwreck (in Tulamben) and Lake Yeh Malet (in Manggis). And it doesn't end there: stroll through Mason Elephant Park, contemplate in the serene atmosphere at Tirta Empul Temple, get outside with Outdoor Activities, and examine the collection at Setia Darma House of Mask and Puppets.

For more things to do, traveler tips, photos, and more tourist information, you can read our Ubud day trip app.

Things to do in Ubud 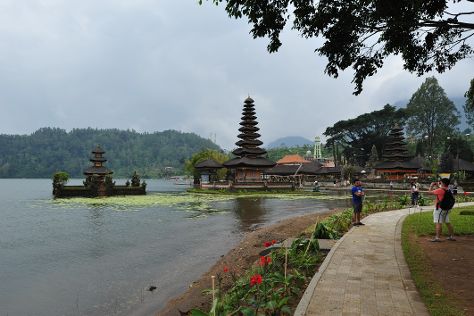 Rolling green hills and rice paddy fields stretch between Bali's second-highest peak and an unspoiled coastline in Tabanan, one of the island's most geographically diverse regions.

Venture out of the city with trips to Sekumpul Waterfalls (in Singaraja), Banyumala Twin Waterfalls (in Wanagiri) and Bedugul (Abandoned Bedugul Hotel & Sugeng Ariawan Arts Gallery). Next up on the itinerary: tee off at Nirwana Bali Golf Club, explore the ancient world of Ulun Danu Beratan Temple, cruise along Belimbing Village, and don't miss a visit to The Royal Puri Anyar Kerambitan.

Drive from Ubud to Tabanan in 1.5 hours. In July, daytime highs in Tabanan are 84°F, while nighttime lows are 76°F. Finish your sightseeing early on the 12th (Sun) so you can travel back home.
more less

Things to do in Tabanan