Discover out-of-the-way places like Kaiserliche Schatzkammer Wien and Peterskirche. Get a sense of the local culture at Schonbrunn Palace and The Hofburg. Explore Vienna's surroundings by going to Wachau Valley (in Joching) and Naturpark Mannersdof-Wuste (in Mannersdorf am Leithagebirge). There's lots more to do: explore the world behind art at Kunsthistorisches Museum Wien, admire the striking features of Belvedere Palace, examine the collection at The Third Man Museum, and stroll the grounds of Central Cemetery (Zentralfriedhof).

To see photos, reviews, ratings, and tourist information, you can read our Vienna planner .

Perth, Australia to Vienna is an approximately 23-hour flight. You can also do a combination of flight and bus; or do a combination of flight and train. Traveling from Perth to Vienna, you'll gain 7 hours due to the time zone difference. When traveling from Perth in November, plan for colder days in Vienna, with highs around 11°C, while nights are a bit cooler with lows around 3°C. Finish your sightseeing early on the 21st (Sat) to allow enough time to travel to Prague.
more less

Your cultural itinerary includes sights like Staromestske namesti and Prague Castle. Appreciate the collections at Lobkowicz Palace and National Memorial to the Heroes of the Heydrich Terror. Explore the numerous day-trip ideas around Prague: St Barbara's Church (in Kutna Hora) and The State Chateau of Hluboká (in Hluboka nad Vltavou). There's still lots to do: pause for some serene contemplation at St. Vitus Cathedral, admire the striking features of Prague Astronomical Clock, surround yourself with nature on a nature and wildlife tour, and take in the spiritual surroundings of Spanish Synagogue.

To find traveler tips, reviews, other places to visit, and tourist information, refer to the Prague day trip planning website .

Fly from Vienna to Prague in 3 hours. Alternatively, you can drive; or take a bus. In November, daytime highs in Prague are 9°C, while nighttime lows are 2°C. Wrap up your sightseeing on the 25th (Wed) early enough to travel to Florence.
more less 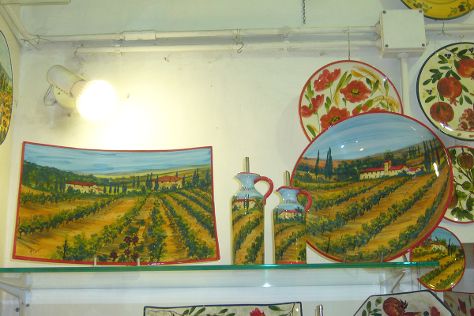 Head to M.G. Design and Art Gallery Studio Iguarnierifor plenty of shopping. Museum-lovers will appreciate Academy Of Florence Art Gallery and Pitti Palace. Venture out of the city with trips to Pisa (Camposanto & Duomo di Pisa). Next up on the itinerary: contemplate in the serene atmosphere at Cathedral of Santa Maria del Fiore, don't miss a visit to Piazzale Michelangelo, pause for some serene contemplation at Church and Museum of Orsanmichele, and pause for some photo ops at Loggia dei Lanzi.

For where to stay, traveler tips, maps, and other tourist information, read our Florence trip itinerary builder app .

You can fly from Prague to Florence in 4.5 hours. Alternatively, you can do a combination of flight and train; or drive. Traveling from Prague in November, things will get a bit warmer in Florence: highs are around 19°C and lows about 9°C. Cap off your sightseeing on the 29th (Sun) early enough to catch the train to Rome.
more less

Pisa
Highlights from your plan

Appreciate the collections at Vatican Museums and Le Domus Romane di Palazzo Valentini. Colosseum and Palatine Hill will appeal to history buffs. Venture out of the city with trips to Duomo di Orvieto (in Orvieto), Civita di Bagnoregio (in Civita di Bagnoregio) and Mastro Cencio (in Civita Castellana). There's lots more to do: take in the architecture and atmosphere at St. Peter's Basilica, don't miss a visit to Piazza Navona, appreciate the extensive heritage of Centro Storico Associazione Centro Storico, and delve into the distant past at Parco Archeologico di Ostia Antica.

You can take a train from Florence to Rome in 2 hours. Other options are to drive; or fly. Expect a daytime high around 20°C in November, and nighttime lows around 9°C. Finish your sightseeing early on the 4th (Fri) to allow enough time to travel to Ravello.
more less

Getting from Rome to Ravello by combination of train and subway takes about 3 hours. Other options: drive; or do a combination of train and bus. Traveling from Rome in December, you can expect nighttime temperatures to be a bit warmer in Ravello, with lows of 11°C. Finish up your sightseeing early on the 8th (Tue) so you can travel to Lisbon.
more less

Things to do in Ravello

Do a combination of ferry and flight from Ravello to Lisbon in 9.5 hours. Alternatively, you can do a combination of ferry, train, and flight; or drive. You'll gain 1 hour traveling from Ravello to Lisbon due to the time zone difference. In December, daytime highs in Lisbon are 18°C, while nighttime lows are 8°C. Wrap up your sightseeing on the 12th (Sat) early enough to travel to Dublin.
more less

A history spanning over a thousand years, vibrant nightlife, and a mix of Georgian and modern architecture make Dublin a popular European tourist destination.

Discover out-of-the-way places like Glendalough Cathedral and Bram Stoker's Castle Dracula Dublin. Get some cultural insight at Guinness Storehouse and Grafton Street. Venture out of the city with trips to Bru na Boinne (in Donore), Hore Abbey (in Cashel) and Wicklow Mountains National Park (in Glendalough Village). And it doesn't end there: see the interesting displays at Kilmainham Gaol Museum, look for gifts at Carrolls Irish Gifts, take an in-depth tour of 14 Henrietta Street, and take in the exciting artwork at Gallery of Photography.

For more things to do, where to stay, maps, and other tourist information, read our Dublin trip planner .

Traveling by flight from Lisbon to Dublin takes 6 hours. Alternatively, you can do a combination of car and ferry; or take a bus. Expect a bit cooler temperatures when traveling from Lisbon in December; daily highs in Dublin reach 10°C and lows reach 3°C. Finish your sightseeing early on the 17th (Thu) so you can travel to Paris.
more less

Things to do in Dublin

Head to Champs-Elysees and Saint Germain des Pres Quarterfor some retail therapy. Popular historic sites such as Eiffel Tower and Basilique du Sacre-Coeur de Montmartre are in your itinerary. Step out of Paris with an excursion to Palace of Versailles in Versailles--about 48 minutes away. There's much more to do: explore the world behind art at Musee d'Orsay, appreciate the history behind Arc de Triomphe, stop by Ile Saint-Louis, and shop like a local with Le Marais.

You can fly from Dublin to Paris in 5 hours. Alternatively, you can do a combination of flight and train; or do a combination of bus and flight. Due to the time zone difference, you'll lose 1 hour traveling from Dublin to Paris. Expect a daytime high around 9°C in December, and nighttime lows around 3°C. Finish up your sightseeing early on the 22nd (Tue) so you can catch the train to Amsterdam.
more less

Give yourself a bit of retail therapy at The Mauritshuis Royal Picture Gallery and De Beurspassage. Van Gogh Museum and Rijksmuseum will appeal to museum buffs. You'll find plenty of places to visit near Amsterdam: The Hague (Panorama Mesdag & Louwman Museum The Hague) and Kroller-Muller Museum (in Otterlo). There's lots more to do: get engrossed in the history at Anne Frank House, indulge your thirst for a good beer at Heineken Experience, steep yourself in history at Museum Het Rembrandthuis (Rembrandt House), and appreciate the extensive heritage of Begijnhof.

For maps, traveler tips, photos, and other tourist information, refer to the Amsterdam trip itinerary planner .

You can take a train from Paris to Amsterdam in 3.5 hours. Alternatively, you can fly; or drive. In December, daily temperatures in Amsterdam can reach 9°C, while at night they dip to 3°C. Wrap up your sightseeing on the 27th (Sun) early enough to travel to Stockholm.
more less

Your cultural itinerary includes sights like Vasa Museum and Stockholm Old Town. Your inner history buff will appreciate Royal Palace and Riddarholmen Church. Get out of town with these interesting Stockholm side-trips: Uppsala (Uppsala Domkyrka, Godsmagasinet, & more). There's lots more to do: see the interesting displays at Skansen, stroll the grounds of Skogskyrkogarden, brush up on your military savvy at Royal Armory, and explore the world behind art at Fotografiska Stockholm.

To find other places to visit, maps, ratings, and tourist information, refer to the Stockholm trip itinerary app .

Traveling by flight from Amsterdam to Stockholm takes 5 hours. Alternatively, you can do a combination of flight and train; or drive. Traveling from Amsterdam in December, things will get a bit cooler in Stockholm: highs are around 3°C and lows about -1°C. Finish your sightseeing early on the 31st (Thu) so you can travel to St. Petersburg.
more less

Uppsala
Highlights from your plan

Get outdoors at Yelagin Island and Kayaking & Canoeing. Get some historical perspective at Grand Peterhof Palace and Palace Square. There's much more to do: stroll through Catherine Palace and Park, explore the engaging exhibits at The Shadow Museum, take in the architecture and atmosphere at Church of the Savior on Spilled Blood, and admire the masterpieces at The State Hermitage Museum.

To find traveler tips, other places to visit, photos, and other tourist information, you can read our St. Petersburg holiday maker .