Kick off your visit on the 19th (Wed): explore the world behind art at Chora Museum, admire the striking features of Basilica Cistern, thentake an in-depth tour of Hagia Sophia Museum, and finally take an in-depth tour of Topkapi Palace. Get ready for a full day of sightseeing on the 20th (Thu): admire the landmark architecture of Dolmabahce Palace, steep yourself in history at Galata Tower, thencontemplate in the serene atmosphere at Suleymaniye Cami , thencontemplate in the serene atmosphere at Sultan Ahmed Mosque, and finally take in the spiritual surroundings of Little Hagia Sophia.

Samsun to Istanbul is an approximately 8.5-hour car ride. You can also fly. In August, daily temperatures in Istanbul can reach °C, while at night they dip to °C. Wrap up your sightseeing on the 20th (Thu) to allow time to travel to Marmaris.
more less 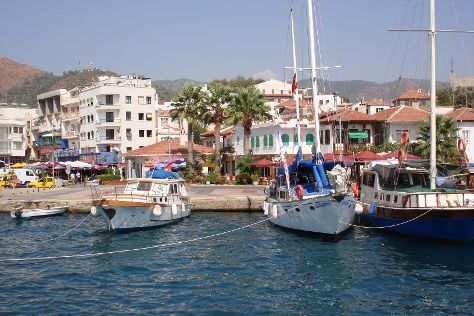 Kick off your visit on the 21st (Fri): go for a stroll along the water at Marmaris Marina, thentake in the spiritual surroundings of Siteler Sirinyer Cami, thenlook for gifts at Pasha Fine Jewelery, and finally stroll around Ataturk Park.

To find other places to visit, more things to do, traveler tips, and other tourist information, you can read our Marmaris sightseeing planning app.

Getting from Istanbul to Marmaris by flight takes about 6 hours. Other options: drive; or take a bus. In August, plan for daily highs up to °C, and evening lows to °C. Finish your sightseeing early on the 21st (Fri) to allow enough time to drive to Mugla.
more less

©
Muğla is a city in south-western Turkey. Start off your visit on the 22nd (Sat): contemplate the long history of Serefliler Evi, delve into the distant past at Stratonikeia Antik Kenti, and then browse the exhibits of Dibekli Han Kultur ve Sanat.

Traveling by car from Marmaris to Mugla takes an hour. Finish up your sightseeing early on the 22nd (Sat) so you can travel back home.
more less

Things to do in Mugla