Jordan's capital city, Amman spreads across 19 hills and includes many distinct districts, each with their own historical and cultural marvels.

Kick off your visit on the 19th (Wed): delve into the distant past at The Citadel, then have fun and explore at Children's Museum, then steep yourself in history at Mount Nebo, and finally pause for some photo ops at Madaba Mosaic Map. Get ready for a full day of sightseeing on the 20th (Thu): explore the ancient world of Roman Amphitheater, don't miss a visit to Rainbow Street, and then explore the ancient world of Jerash Ruins.

To see more things to do, maps, ratings, and more tourist information, go to the Amman itinerary site .

Zurich, Switzerland to Amman is an approximately 9-hour combination of flight and bus. You can also do a combination of train, flight, and bus; or drive. The time zone difference when traveling from Zurich to Amman is 1 hour. Plan for a bit warmer temperatures traveling from Zurich in February, with highs in Amman at 19°C and lows at 7°C. Wrap up your sightseeing on the 20th (Thu) early enough to drive to Wadi Rum.
more less

Things to do in Amman 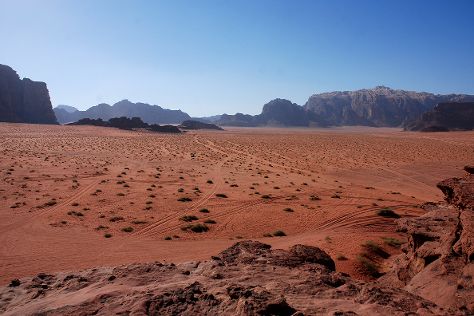 Tourism in Wadi Rum revolves around UNESCO-protected desert scenery and spectacular limestone rock formations following a dry river bed, which in World War I served as the headquarters of a British-inspired Arab revolt against the Ottomans.

On the 21st (Fri), explore the fascinating landscape at Wadi Rum Protected Area.

Find out how to plan Wadi Rum trip without stress by asking Inspirock to help create an itinerary.

Things to do in Wadi Rum

Start off your visit on the 22nd (Sat): delve into the distant past at Obelisk Tomb and then contemplate the long history of Petra.

Traveling by car from Wadi Rum to Petra - Wadi Musa takes 2 hours. Finish your sightseeing early on the 22nd (Sat) so you can travel back home.
more less