Visit Medano Beach and Playa Palmilla (Palmilla Beach) for some beach relaxation. Get some cultural insight at La Turquesa Jewelry and Art and Church of Saint Luke. Explore Cabo San Lucas' surroundings by going to San Jose del Cabo (Enrique Bascon, Galeria de Arte, Parroquia San Jose, &more) and Todos Santos (Galeria de Todos Santos, Manos Mexicanas, &more). Next up on the itinerary: see what you can catch with a fishing tour, find your balance on the water with some of the best stand-up paddleboarding in the area, stroll through Chileno Beach, and see majestic marine mammals with a dolphin and whale watching tour.

Toronto, Canada to Cabo San Lucas is an approximately 9-hour flight. You can also drive; or do a combination of train, car, and bus. The time zone changes from Eastern Standard Time (EST) to Mexican Pacific Standard Time (MST), which is usually a -2 hour difference. Plan for warmer temperatures traveling from Toronto in January, with highs in Cabo San Lucas at 28°C and lows at 20°C. Wrap up your sightseeing on the 25th (Sat) to allow time to drive to Cabo Pulmo.
more less

©
On the 26th (Sun), stroll through Cabo Pulmo Marine Preserve and then see some colorful creatures with a scuba or snorkeling tour.

To find other places to visit, reviews, and other tourist information, read our Cabo Pulmo holiday planning tool. 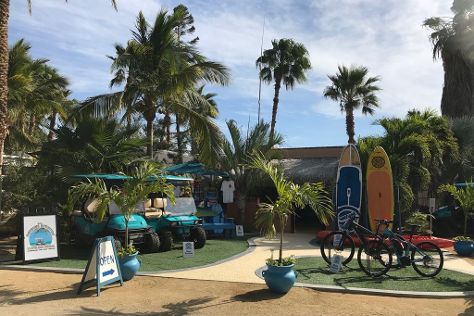 ©
You've now added Baja's Awesome Sportfishing to your itinerary. Start off your visit on the 27th (Mon): take a tour by water with Baja's Awesome Sportfishing and then discover the deep blue sea with a scuba or snorkeling tour. Get ready for a full day of sightseeing on the next day: tour the pleasant surroundings at Rancho Ecologico Sol de Mayo and then get a new perspective on things with Boat Tours & Water Sports.

To see where to stay, more things to do, other places to visit, and tourist information, refer to the Los Barriles trip planner.

You can drive from Cabo Pulmo to Los Barriles in 1.5 hours. In January, daytime highs in Los Barriles are 31°C, while nighttime lows are 16°C. Finish up your sightseeing early on the 28th (Tue) so you can go by car to La Paz.
more less

Things to do in Los Barriles

Do some cultural sightseeing at Caktu Souvenirs and Galeria Museo. Get in touch with nature at Balandra Beach and Fishing Charters & Tours. Venture out of the city with trips to Balandra Beach (in Los Tecolotes) and Palm Beach (in Todos Santos). There's much more to do: head off the coast to Isla Espiritu Santo, take in the exciting artwork at GALERIAS SERGIO BUSTAMANTE S.A. DE CV, kick back and relax at Ensenada Grande, and tour the pleasant surroundings at Playa Pichilingue (Pichilingue Beach).

You can drive from Los Barriles to La Paz in 2 hours. January in La Paz sees daily highs of 30°C and lows of 15°C at night. Finish your sightseeing early on the 6th (Thu) to allow enough time to travel to Loreto.
more less

©
Loreto is a city in and municipal seat of Loreto Municipality, located on the Gulf of California in eastern Baja California Sur state, Mexico.The city of 14,724 people is located about 350km north of La Paz, the capital of Baja California Sur state.HistoryLoreto was the first Spanish colonial settlement of the Viceroyalty of New Spain on the Baja California Peninsula.The town was founded in 1697 by Jesuit missionaries, who found a steady spring of fresh water on this site, as the Misión Nuestra Señora de Loreto. Take a break from the city and head to Parque Nacional Bahia de Loreto and Scuba & Snorkeling. Get a sense of the local culture at Misión San Francisco Javier de Viggé-Biaundó and Museo de las Misiones de Baja California. There's much more to do: pause for some serene contemplation at Mision de Nuestra Senora de Loreto, paddle through the water with a kayaking and canoeing tour, cast your line with a fishing tour, and view the masterpieces at Richard Jackson Galeria.

To find photos, ratings, and more tourist information, use the Loreto trip builder.

You can drive from La Paz to Loreto in 4.5 hours. Expect a daytime high around 30°C in February, and nighttime lows around 16°C. Cap off your sightseeing on the 12th (Wed) early enough to travel to San Ignacio.
more less

To see traveler tips, where to stay, more things to do, and more tourist information, refer to the San Ignacio trip planning website.

You can drive from Loreto to San Ignacio in 4.5 hours. When traveling from Loreto in February, plan for slightly colder days in San Ignacio, with highs around 26°C, while nights are about the same with lows around 19°C. Wrap up your sightseeing on the 15th (Sat) to allow time to travel to Mexicali.
more less

©
Mexicali is the capital city of the Mexican state of Baja California and seat of the Municipality of Mexicali. Escape the urban bustle at Canon de Guadalupe and Cerro Prieto. Centro Estatal de las Artes, Mexicali and Instituto de Investigaciones Culturales - Museo UABC are good opportunities to explore the local culture. There's still lots to do: take in the architecture and atmosphere at Cathedral of Our Lady of Guadalupe, buy something for everyone on your list at Plaza Galerias del Valle, try to win big at Arenia Casino, and get curious at Museo Sol del Nino.

To find photos, maps, other places to visit, and tourist information, refer to the Mexicali trip itinerary tool.

You can drive from San Ignacio to Mexicali in 10.5 hours. The time zone changes from Mexican Pacific Standard Time to Pacific Standard Time, which is usually a -1 hour difference. Traveling from San Ignacio in February, expect slightly colder with lows of 11°C in Mexicali. Cap off your sightseeing on the 18th (Tue) early enough to travel to Valle de Guadalupe.
more less

Things to do in Mexicali

©
Cathedral of Our Lady of Guadalupe

©
Tijuana is the largest city in Baja California and on the Baja California Peninsula and center of the Tijuana metropolitan area, part of the international San Diego–Tijuana metropolitan area. Take a break from the city and head to Wine Tours & Tastings and Playas de Tijuana. La Vid and Catedral de Nuestra Senora de Guadalupe are good opportunities to explore the local culture. Explore Tijuana's surroundings by going to Rosarito (Ugi Gallery, Mercado Del Mar, &more) and Museo Comunitario Kumiai (in Tecate). The adventure continues: get engrossed in the history at Amigos del Artes, browse the different shops at Plaza Rio Tijuana, explore the engaging exhibits at Museo del Trompo, and make a trip to Tijuana Arch.

To see maps, where to stay, reviews, and other tourist information, go to the Tijuana day trip planner.