Family-friendly places like Disneyland Paris and Centre National d'Art et de Culture George Pompidou will thrill your kids. Change things up with a short trip to Palace of Versailles in Versailles (about 48 minutes away). Next up on the itinerary: explore the world behind art at Louvre Museum, take in the architecture and atmosphere at Basilique du Sacre-Coeur de Montmartre, pause for some photo ops at Arc de Triomphe, and contemplate the waterfront views at Seine River.

For more things to do, reviews, other places to visit, and other tourist information, read our Paris trip tool .

Sydney, Australia to Paris is an approximately 27-hour flight. You can also do a combination of flight and train. You'll gain 9 hours traveling from Sydney to Paris due to the time zone difference. Prepare for cooler weather when traveling from Sydney in December: high temperatures in Paris hover around 9°C and lows are around 3°C. Finish your sightseeing early on the 16th (Thu) to allow enough time to travel to Mont-Saint-Michel.
more less

Palace of Versailles, Disneyland Paris
Highlights from your plan

©
Le Mont-Saint-Michel is an island commune in Normandy, France. On the 17th (Fri), don't miss a visit to La Poste, Mont-Saint-Michel, look for all kinds of wild species at Mont Saint-Michel Bay, then pause for some serene contemplation at Église Saint-Pierre - Le Mont-Saint-Michel, and finally admire the striking features of Mont Saint-Michel. Get ready for a full day of sightseeing on the 18th (Sat): tour the pleasant surroundings at Plage Saint-Martin-de-Brehal, then get to know the resident critters at Zoo de Champrepus, and then make a splash at Alligator Bay.

You can do a combination of train and bus from Paris to Mont-Saint-Michel in 5.5 hours. Alternatively, you can take a train; or take a bus. In December in Mont-Saint-Michel, expect temperatures between 12°C during the day and 5°C at night. On the 19th (Sun), you'll have the morning to explore before heading off to Orleans.
more less 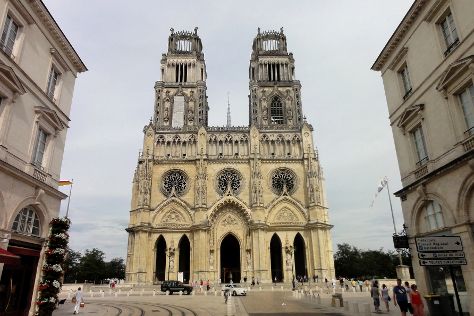 ©
Orléans is a city in north-central France, about 111km southwest of Paris. Start off your visit on the 20th (Mon): contemplate the long history of Hotel Groslot, then take in the spiritual surroundings of Orléans Cathedral, then appreciate the extensive heritage of Centre-ville, and finally don't miss a visit to Place du Martroi. Here are some ideas for day two: test your problem-solving skills at popular escape rooms, explore the landscape on two wheels at Loire a Velo Cycle Path, then walk around Parc Floral Orleans, and finally have some family-friendly fun at TransVRsalle.

Plan a trip to Orleans easily and quickly by telling Inspirock to suggest an itinerary.

You can take a train from Mont-Saint-Michel to Orleans in 8 hours. Other options are to do a combination of bus and train; or do a combination of train and flight. Traveling from Mont-Saint-Michel in December, expect Orleans to be slightly colder, temps between 7°C and 1°C. Finish your sightseeing early on the 21st (Tue) so you can take a train to Amboise.
more less

Things to do in Orleans 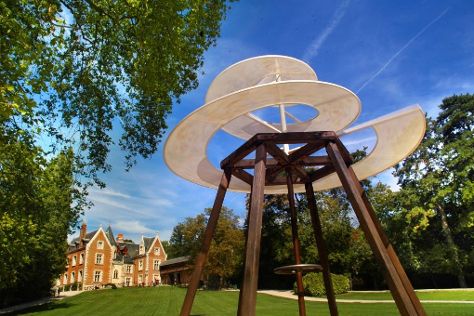 Amboise is a commune in the Indre-et-Loire department in central France. On the 22nd (Wed), awaken your taste buds at some of the top wineries in the area, step into the grandiose world of Chateau Royal d'Amboise, then take an in-depth tour of Le Chateau du Clos Luce - Parc Leonardo da Vinci, and finally learn about winemaking at Plou Et Fils. Get ready for a full day of sightseeing on the 23rd (Thu): examine the collection at Chateau de Chenonceau and then enjoy unforgettable views with a balloon tour.

To find ratings, reviews, more things to do, and other tourist information, go to the Amboise online road trip planner .

Take a train from Orleans to Amboise in an hour. Alternatively, you can drive. When traveling from Orleans in December, plan for a bit warmer days in Amboise, with highs around 11°C, while nights are about the same with lows around 4°C. Wrap up your sightseeing on the 23rd (Thu) early enough to drive to Chinon.
more less

On the banks of the Vienne River, Chinon offers access to a rich wine area in the Loire Valley.

Start off your visit on the 24th (Fri): learn about wildlife with up-close encounters at Bioparc De Doue La Fontaine and then get in on the family fun at Saint Benoit Aventure. On the 25th (Sat), you'll have a packed day of sightseeing: explore the historical opulence of Chateau de Villandry, step into the grandiose world of Chateau of Azay-le-Rideau, and then test your problem-solving skills at popular escape rooms.

Traveling by car from Amboise to Chinon takes 1.5 hours. Alternatively, you can take a train; or take a bus. December in Chinon sees daily highs of 8°C and lows of 2°C at night. Wrap up your sightseeing on the 25th (Sat) early enough to drive to Sarlat-la-Caneda.
more less

Things to do in Chinon

Medieval Capital of the Dordogne Valley

Sarlat-la-Caneda is the capital of the former Périgord Noir, now referred to as the Aquitaine region that is home to a historical area consisting of impeccably preserved 14th-century buildings and sites.

Use Inspirock's suggestions to plan your Sarlat-la-Caneda trip and find the best activities and attractions for your vacation.

Traveling by car from Chinon to Sarlat-la-Caneda takes 4.5 hours. Alternatively, you can take a train; or take a bus. Traveling from Chinon in December, expect nights in Sarlat-la-Caneda to be about the same, around 1°C, while days are somewhat warmer, around 13°C. Cap off your sightseeing on the 30th (Thu) early enough to go by car to Briancon.
more less

Things to do in Sarlat-la-Caneda

©
Briançon a commune in the Hautes-Alpes department in the Provence-Alpes-Côte d'Azur region in southeastern France. Kids will appreciate attractions like Vars la Foret Blanche and Serre Chevalier Sensation. Change things up with these side-trips from Briancon: Orcieres (Orcieres Merlette Ski & Ski Orcieres Merlette), Station de Ski Reallon (in Reallon) and Alpe d'Huez Grand Domaine Ski (in L'Alpe-d'Huez). There's still lots to do: hit the slopes at Stations Village du Pays de la Meije, get lost in a book at La Muse Gueule, stroll through Serre Chevalier Vallee, and get in on the family fun at Luge Monty Express.

You can drive from Sarlat-la-Caneda to Briancon in 7.5 hours. Alternatively, you can do a combination of train and flight; or take a train. Cap off your sightseeing on the 4th (Tue) early enough to go by car to Aix-en-Provence.
more less

Things to do in Briancon

Kids will enjoy Palais des Papes and Pont d'Avignon. Get out of town with these interesting Aix-en-Provence side-trips: Ballon 2 Rouge (in Saint-Remy-de-Provence), Cassis (Calanques & Bibliotheque Municipale de Cassis) and Marseille (Skatepark du Prado, Basilique Notre-Dame de la Garde, & more). Next up on the itinerary: have some family-friendly fun at Aviasim Aix-en-Provence, get engrossed in the history at Paul Cezanne’s Studio, test your team's savvy at popular escape rooms, and take a stroll through Cours Mirabeau.

To find other places to visit, traveler tips, ratings, and other tourist information, read our Aix-en-Provence vacation planner.

Getting from Briancon to Aix-en-Provence by car takes about 3 hours. Other options: take a train; or take a bus. Expect a daytime high around 13°C in January, and nighttime lows around 4°C. Finish your sightseeing early on the 9th (Sun) to allow enough time to drive to Hyeres.
more less

©
Hyères, Provençal Occitan: Ieras in classical norm, or Iero in Mistralian norm) is a commune in the Var department in the Provence-Alpes-Côte d'Azur region in southeastern France.The old town lies 4km from the sea clustered around the Castle of Saint Bernard, which is set on a hill. You'll visit kid-friendly attractions like Speedkart and Plage de Pampelonne. Explore Hyeres' surroundings by going to Six-Fours-les-Plages (Ile des Embiez, Laser Game Evolution Toulon, & more) and Sentier du littoral - Le Lavandou - Plage de la Fossette (in Le Lavandou). Next up on the itinerary: have some family-friendly fun at Virtual Room Toulon, get in on the family fun at Accro Aventures, pause for some serene contemplation at Eglise Saint Louis, and identify plant and animal life at La Route du Sel.

For ratings, more things to do, and more tourist information, use the Hyeres trip itinerary planning tool .

Traveling by car from Aix-en-Provence to Hyeres takes 1.5 hours. Alternatively, you can take a train; or do a combination of bus and train. Expect a daytime high around 16°C in January, and nighttime lows around 5°C. Finish up your sightseeing early on the 14th (Fri) so you can go by car to Nice.
more less

You'll visit kid-friendly attractions like Marineland and Riviera Nature. Venture out of the city with trips to Galerie Lifetime Gallery (in Mougins), Cannes (Lérins Islands & Galerie1414) and Saint Dalmas Le Selvage (in Saint-Dalmas-le-Selvage). There's still lots to do: hit the slopes at Station de Ski L'Audibergue, take some stellar pictures from Colline du Chateau overlook, partake in some friendly competition at 1,2,3 CAT, and take in the awesome beauty at Mont Vinaigre.

To find traveler tips, maps, more things to do, and other tourist information, you can read our Nice holiday website .

You can drive from Hyeres to Nice in 2 hours. Other options are to take a train; or take a bus. In January, daily temperatures in Nice can reach 15°C, while at night they dip to 7°C. On the 23rd (Sun), wrap the sightseeing up by early afternoon so you can travel back home.
more less