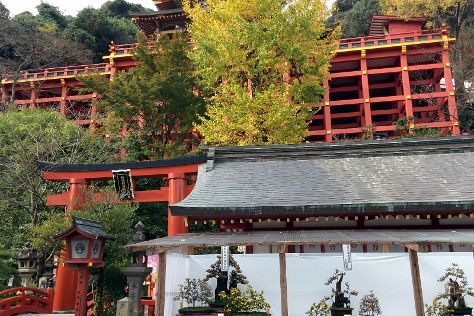 ©
Saga is the capital city of Saga Prefecture, located on the island of Kyushu, Japan.Saga was the capital of Saga Domain in the Edo period, and largest city of former Hizen Province.As of February 28, 2017, the city has an estimated population of 234,453 and a population density of 543 persons per km². Explore hidden gems such as Yutoku Inari Shrine and Yoshinogari Historical Park. Visit Saga Castle Shachinomon & Tsuzuki Yagura and House of Yamaguchi Family for their historical value. Venture out of the city with trips to Ureshino (Todoroki Falls, Toyotamahime Shrine, &more), Tara-cho (Kaichu Torii & Michi-no-Eki Tara) and Takeo (Koyaji Temple, Public Interest Incorporated Foundation Yoko Museum, &more). There's still lots to do: admire the striking features of Saga Castle Hommaru History Museum, take in the spiritual surroundings of Nannyo Shrine, steep yourself in history at Saga Shrine, and identify plant and animal life at Suaeda Japonica Habitat.

For more things to do, maps, photos, and other tourist information, read our Saga online trip itinerary maker.

Buenos Aires, Argentina to Saga is an approximately 40- hour combination of flight and car. The time zone difference moving from Argentina Standard Time (ART) to Japan Standard Time (JST) is 12 hours. Plan for much colder temperatures traveling from Buenos Aires in January, with highs in Saga at 11°C and lows at 0°C. Finish your sightseeing early on the 8th (Fri) to allow enough time to drive to Karatsu.
more less

Things to do in Saga

The coastal city of Karatsu has long held importance for trade with China and the Korean Peninsula.

Get in touch with nature at Nijino Matsubara and Nanatsugama Caves. Deepen your sense of the past at sights like Former Takatori House and Hoto Shrine. Explore Karatsu's surroundings by going to Imari (Yodohime Shrine, Aohata Shrine, &more), Takeo (Ennoji, Chimachibo Park, &more) and Arita-cho (Ryumonkyo, Tonbaibei in the Back Street, &more). And it doesn't end there: take in the dramatic scenery at Mikaerino-taki, don't miss a visit to Nagoya Castle Ruins, take in the spiritual surroundings of Tashima Shrine, and kick back and relax at Hado Misaki.

For more things to do, photos, where to stay, and more tourist information, refer to the Karatsu tour itinerary planner.

Traveling by car from Saga to Karatsu takes 1.5 hours. Expect somewhat warmer evenings in Karatsu when traveling from Saga in February, with lows around 7°C. Finish your sightseeing early on the 27th (Wed) so you can travel back home.
more less

Things to do in Karatsu