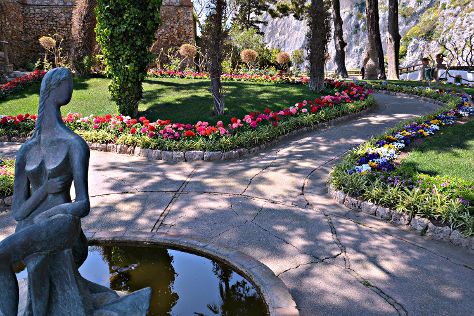 ©
Anacapri is a comune on the island of Capri, in the Metropolitan City of Naples, Italy. Start off your visit on the 24th (Sat): get engrossed in the history at Villa San Michele. On the 25th (Sun), you'll have a packed day of sightseeing: explore the ancient world of Villa del Damecuta, take in the spiritual surroundings of Chiesa San Michele, get great views at Monte Solaro Chairlift Seggiovia Monte Solaro, then take in nature's colorful creations at Giardini di Augusto, then Head underground at White Grotta, and finally pause for some photo ops at Natural Arch.

To see reviews, photos, maps, and tourist information, use the Anacapri visit planner .

Things to do in Anacapri

Capri
Highlights from your plan

©
Naples is the capital of the Italian region Campania and the third-largest municipality in Italy after Rome and Milan. Eschew the tourist crowds and head to LAES - La Napoli Sotterranea and Villa di Pollio Felice - Bagni della Regina Giovanna. Do some cultural sightseeing at Gesu Nuovo Church and Cimitero delle Fontanelle. Explore the numerous day-trip ideas around Naples: Forum (in Pompeii), Sorrento (Wine Tours & Tastings & Food Tours) and Duomo di Salerno (in Salerno). There's lots more to do: step into the grandiose world of Castel dell'Ovo, take in the architecture and atmosphere at Duomo di Napoli, look for all kinds of wild species at Posillipo, and delve into the distant past at Scavi di Oplontis.

You can plan Naples trip in no time by asking Inspirock to help create your itinerary.

Traveling by car from Anacapri to Naples takes 2.5 hours. August in Naples sees daily highs of 36°C and lows of 25°C at night. Finish up your sightseeing early on the 31st (Sat) so you can go by car to Forio.
more less

To find other places to visit, reviews, more things to do, and more tourist information, refer to the Forio road trip planning tool .

Traveling by car from Naples to Forio takes 2 hours. In August, plan for daily highs up to 36°C, and evening lows to 26°C. Wrap up your sightseeing on the 6th (Fri) early enough to travel to Palinuro.
more less

Things to do in Forio

©
Palinuro is an Italian small town, the most populated civil parish of Centola, Province of Salerno, in the Campania region. Satisfy your inner culture vulture at Parco Archeologico di Elea - Velia and Cappella di San Michele Arcangelo. You'll get in some beach time at Cala Bianca Beach and Spiaggia Marina di Ascea. Change things up with these side-trips from Palinuro: Area Marina Protetta Costa degli Infreschi e della Masseta (in Marina di Camerota), Oasi WWF di Morigerati (in Morigerati) and Acciaroli Port (in Acciaroli). There's much more to do: kick back and relax at Baia del Buon Dormire, take in the architecture and atmosphere at Cappella della Mercede, explore the striking landscape at Grotte Marine di Capo Palinuro, and don't miss a visit to Baia Infreschi Marina Di Camerota.

For photos, maps, and tourist information, refer to the Palinuro trip builder tool .

Things to do in Palinuro

You can drive from Palinuro to Maratea in 1.5 hours. Other options are to take a train; or do a combination of bus and train. Cap off your sightseeing on the 17th (Tue) early enough to catch the train to Reggio Calabria.
more less

Things to do in Maratea

For where to stay, photos, maps, and tourist information, refer to the Reggio Calabria tour builder tool .

Getting from Maratea to Reggio Calabria by train takes about 3 hours. Other options: drive. In September in Reggio Calabria, expect temperatures between 32°C during the day and 24°C at night. Finish your sightseeing early on the 21st (Sat) to allow enough time to take a train to Capo Vaticano.
more less

©
Cattedrale di Gerace and Chiesa di San Pietro Apostolo are good opportunities to explore the local culture. Explore hidden gems such as Scuba & Snorkeling and Capo Vaticano. Go for a jaunt from Capo Vaticano to Gerace to see Museo Diocesano about 1h 20 min away.

Things to do in Capo Vaticano

©
Pertosa is a village and comune of the province of Salerno in the Campania region of south-west Italy. Satisfy your inner culture vulture at Cantine del Notaio and Museo Archeologico Nazionale. You'll explore the less-touristy side of things at Oasi Valle della Caccia and Grotte di Pertosa-Auletta. Change things up with these side-trips from Pertosa: Certosa di Padula (in Padula), Muro Lucano - Castello (in Muro Lucano) and Castle (in Melfi). And it doesn't end there: Head underground at Grotte di Castelcivita, explore the historical opulence of Castello Marchesale di Auletta, explore the ancient world of Area Archeologica di Serra di Vaglio, and contemplate the long history of Roscigno Vecchia.

To find where to stay, photos, ratings, and tourist information, read our Pertosa trip planner .

Things to do in Pertosa 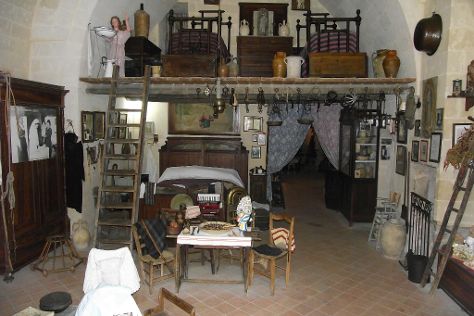 To see ratings, more things to do, traveler tips, and other tourist information, you can read our Matera holiday planner.

Drive from Pertosa to Matera in 2 hours. Expect little chillier evenings in Matera when traveling from Pertosa in September, with lows around 17°C. Wrap up your sightseeing on the 5th (Sat) early enough to travel back home.
more less