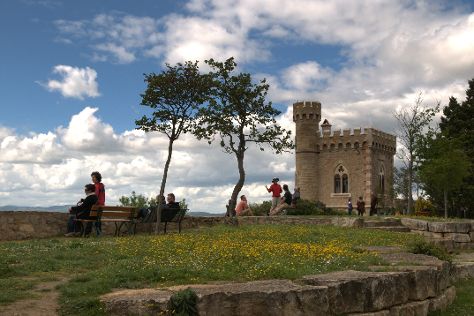 ©
Rennes-le-Château is a small commune approximately 5 km south of Couiza, in the Aude department in Languedoc in southern France.This small French hilltop village is known internationally, and receives tens of thousands of visitors per year, because of various conspiracy theories, about an alleged buried treasure discovered by its 19th-century priest Bérenger Saunière, the precise nature of which is disputed by those who believe in its existence.HistoryMountains frame both ends of the region—the Cevennes to the northeast and the Pyrenees to the south. You've now added Rennes le chateau to your itinerary. Step out of Rennes-le-Chateau to go to Fenouillet and see Au Rucher de Flora, which is approximately 34 minutes away. There's still lots to do: steep yourself in history at Musee Berenger Sauniere, enjoy breathtaking views from Tour Magdala, step into the grandiose world of Chateau d'Arques, and look for all kinds of wild species at Source Salee de la Sals.

If you are flying in from United States, the closest major aiports are Carcassonne Airport, Perpignan-Rivesaltes (Llabanère) Airport and Béziers-Vias Airport. In December, daytime highs in Rennes-le-Chateau are °F, while nighttime lows are °F. You'll set off for home on the 29th (Sun).
more less

Things to do in Rennes-le-Chateau