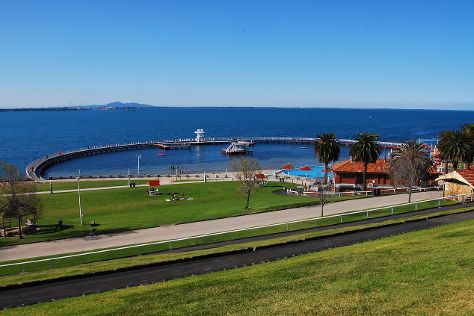 ©
Geelong is a port city located on Corio Bay and the Barwon River, in the state of Victoria, Australia, 75km south-west of the state capital, Melbourne. You've now added Sovereign Hill to your itinerary. Explore Geelong's surroundings by going to Twelve Apostles (in Port Campbell) and Werribee Open Range Zoo (in Werribee). And it doesn't end there: kick back and relax at Eastern Beach Reserve, examine the collection at National Wool Museum, cruise along The Great Ocean Road, and don't miss a visit to Geelong Mosque.

For reviews, photos, traveler tips, and other tourist information, go to the Geelong holiday planner.

If you are flying in from Malaysia, the closest major aiport is Melbourne International Airport. In December, daytime highs in Geelong are 29°C, while nighttime lows are 13°C. You'll set off for home on the 23rd (Mon).
more less

Things to do in Geelong