©
Aquileia is an ancient Roman city in Italy, at the head of the Adriatic at the edge of the lagoons, about 10km from the sea, on the river Natiso (modern Natisone), the course of which has changed somewhat since Roman times. On the 19th (Sun), take in the spiritual surroundings of Basilica di Aquileia and then take an in-depth tour of Museo Archeologico Nazionale di Aquileia. Keep things going the next day: admire the striking features of Palazzo Meizlik, make a trip to Cripta Degli Scavi, don't miss a visit to Il campanile di Aquileia, thenexplore the ancient world of Foro Romano di Aquileia, thensample the fine beverages at Distilleria Aquileia, and finally explore the different monuments and memorials at Cimitero Al Milite Ignoto.

Milan to Aquileia is an approximately 4-hour car ride. You can also fly; or take a train. July in Aquileia sees daily highs of 34°C and lows of 21°C at night. Finish up your sightseeing early on the 20th (Mon) so you can travel to Calascio.
more less

Things to do in Aquileia 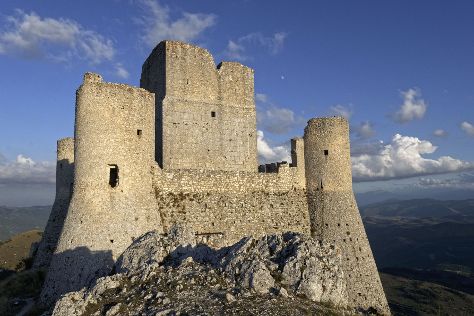 ©
Calascio is a comune and village in the province of L'Aquila, in the Abruzzo region of central Italy. On the 21st (Tue), head outdoors with Il Bosso, Head underground at Grotte di Stiffe, and then contemplate the long history of Bominaco. Keep things going the next day: pause for some serene contemplation at Chiesa di Santa Maria della Pieta, thendelve into the distant past at Rocca Calascio, and then take some stellar pictures from Santo Stefano di Sessanio.

Make your Calascio itinerary with Inspirock to find out what to see and where to go.

Getting from Aquileia to Calascio by car takes about 7.5 hours. Other options: do a combination of car and flight. Wrap up your sightseeing on the 22nd (Wed) early enough to travel back home.
more less

Things to do in Calascio