For reviews, other places to visit, and more tourist information, refer to the Bophut travel planner.

Patong to Bophut is an approximately 4.5- hour combination of flight and bus. You can also take a bus. In January, daily temperatures in Bophut can reach 35°C, while at night they dip to 30°C. Finish your sightseeing early on the 4th (Tue) to allow enough time to travel to Ang Thong.
more less 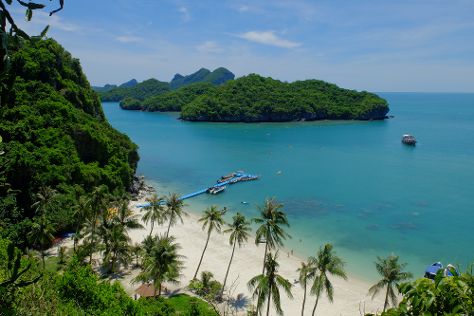 As the capital of a province of the same name, Ang Thong boasts a rich history--most notably as an outpost during the war against the Burmese and the birthplace of Nai Dok and Nai Thongkaeo, two of the war's venerated heroes.

Ang Thong is known for nature, adventure, and shopping. Your plan includes some of its best attractions: take in the dramatic natural features at Mu Ko Ang Thong National Marine Park, take a leisurely stroll along Nathon Pier, step off the mainland to explore Ko Wua Talap Island, and head outdoors with Ko Mae Ko.

To find more things to do, other places to visit, traveler tips, and more tourist information, go to the Ang Thong trip planner.

Explore your travel options from Bophut to Ang Thong with the Route module. In February in Ang Thong, expect temperatures between 36°C during the day and 30°C at night. On the 20th (Thu), you'll travel back home.
more less

Things to do in Ang Thong