Istanbul is known for museums, historic sites, and shopping. Your plan includes some of its best attractions: take an in-depth tour of Hagia Sophia Museum / Church (Ayasofya), explore the world behind art at Kariye Museum (The Chora Church), wander the streets of Ortakoy, and enjoy breathtaking views from Galata Tower.

Plan my Istanbul trip by asking Inpirock to come up with tips and suggestions.

The Route module shows you all the different ways you can get to Istanbul. In May, plan for daily highs up to 25°C, and evening lows to 15°C. Cap off your sightseeing on the 12th (Tue) early enough to travel to Mardin.
more less

©
Mardin is a city and multiple bishopric in southeastern Turkey. Kick off your visit on the 13th (Wed): contemplate in the serene atmosphere at Ulu Cami, then pause for some serene contemplation at Deyrulzafaran Monastery, then delve into the distant past at Dara Mesopotamia Ruins, and finally pause for some serene contemplation at Saint Hirmiz Chaldean Church. On the 14th (Thu), you'll have a packed day of sightseeing: take in the spiritual surroundings of Kasimiye Madrasha, then steep yourself in history at Zinciriye Medresesi, and then see the interesting displays at Mardin Museum.

The Route module can help you plan travel from Istanbul to Mardin. When traveling from Istanbul in May, plan for a bit warmer days and about the same nights in Mardin: temperatures range from 32°C by day to 12°C at night. Finish your sightseeing early on the 14th (Thu) to allow enough time to travel to Sanliurfa.
more less

Things to do in Mardin

©
Şanlıurfa, often simply known as Urfa or Al-Ruha, in ancient times Edessa, is a city with 561,465 inhabitants in south-eastern Turkey, and the capital of Şanlıurfa Province. On the 15th (Fri), explore the world behind art at Sanliurfa Archeology and Mosaic Museum, contemplate the long history of Balikligol, then contemplate in the serene atmosphere at Halil Ul Rahman Mosque, and finally explore the ancient world of Potbelly Hill. On your second day here, contemplate the long history of Gumruk, explore the fascinating underground world of Cave of Abraham, and then delve into the distant past at Castle of Urfa.

For traveler tips, topicsMoreInfo.option.ratings, more things to do, and tourist information, you can read our Sanliurfa online trip maker .

You can drive from Mardin to Sanliurfa in 3 hours. Wrap up your sightseeing on the 16th (Sat) early enough to drive to Adiyaman.
more less

Things to do in Sanliurfa 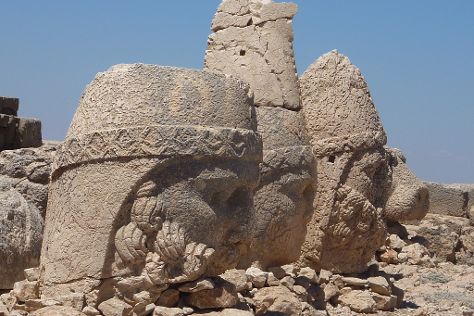 ©
Adıyaman is a city in southeastern Turkey, capital of the Adıyaman Province. Kick off your visit on the 17th (Sun): explore the ancient world of Severan Bridge and then take your sightseeing to a higher altitude at Mount Nemrut.

To see other places to visit, photos, maps, and more tourist information, refer to the Adiyaman trip planner.

Drive from Sanliurfa to Adiyaman in 2 hours. In May, daily temperatures in Adiyaman can reach 30°C, while at night they dip to 15°C. Finish your sightseeing early on the 17th (Sun) to allow enough time to travel to Tunceli.
more less

Things to do in Adiyaman

©
Tunceli Tunceli old name ) is a city in Turkey. Munzur Gozeleri has been added to your itinerary. Change things up with a short trip to Circir Selalesi in Keban (about 2 hours away). Spend the 19th (Tue) exploring nature at Munzur Vadisi Milli Parki. There's more to do: take your sightseeing to a higher altitude at Munzur Daglari and contemplate the waterfront views at Kutu Deresi.

To see reviews, maps, traveler tips, and other tourist information, go to the Tunceli vacation website .

You can drive from Adiyaman to Tunceli in 5.5 hours. Traveling from Adiyaman in May, you can expect nighttime temperatures to be little chillier in Tunceli, with lows of 10°C. Wrap up your sightseeing by early afternoon on the 21st (Thu) to allow enough time to travel to Van.
more less

Things to do in Tunceli

©
Van is a city in eastern Turkey's Van Province, located on the eastern shore of Lake Van. Kick off your visit on the 22nd (Fri): step off the mainland to explore Akdamar Island and then pause for some serene contemplation at Holy Cross Church. Here are some ideas for day two: contemplate the waterfront views at Lake Van and then step into the grandiose world of Van Castle (Van Kalesi).

To see maps, other places to visit, and tourist information, use the Van day trip planner.

Drive from Tunceli to Van in 7.5 hours. Alternatively, you can do a combination of car and flight. On the 24th (Sun), wrap the sightseeing up by early afternoon so you can travel to Gaziantep.
more less

Things to do in Van

A haven for foodies, Gaziantep boasts almost 200 bakeries with what many claim to be the best baklava in the world.

On the 25th (Mon), meet the residents at Gaziantep Zoo, then explore the historical opulence of Gaziantep Castle, and then admire the masterpieces at Zeugma Mosaic Museum. On the 26th (Tue), you'll have a packed day of sightseeing: don't miss a visit to Old Halfeti, then see the interesting displays at Emine Gogus Mutfak Muzesi, then examine the collection at Hamam Muzesi, and finally stop by Bakircilar Carsisi.

Make your Gaziantep itinerary with Inspirock to find out what to see and where to go.

Drive from Van to Gaziantep in 9 hours. Alternatively, you can do a combination of car and flight. In May, plan for daily highs up to 30°C, and evening lows to 13°C. Wrap up your sightseeing by early afternoon on the 27th (Wed) to allow time for travel to Diyarbakir.
more less

Things to do in Gaziantep

©
Diyarbakır is one of the largest cities in southeastern Turkey. Diyarbakir is known for historic sites, shopping, and museums. Your plan includes some of its best attractions: take in the spiritual surroundings of Great Mosque of DiyarbakIr, examine the collection at Cahit Sitki Taranci House Cultural Museum, pause for some serene contemplation at St. Giragos Armenian Church, and browse the eclectic array of goods at Hasan Pasa Hani.

To see topicsMoreInfo.option.ratings, other places to visit, maps, and other tourist information, go to the Diyarbakir online trip itinerary builder .

Traveling by car from Gaziantep to Diyarbakir takes 4 hours. In May, daily temperatures in Diyarbakir can reach 31°C, while at night they dip to 12°C. Wrap up your sightseeing by early afternoon on the 30th (Sat) to allow time for travel to Kars.
more less

Things to do in Diyarbakir

©
Kars is a city in northeast Turkey and the capital of Kars Province.With a population of 73,836, it is the largest city on the Turkish side of the closed border with Armenia. Kick off your visit on the 31st (Sun): see the interesting displays at Kars Museum, then steep yourself in history at Kars Citadel, and then contemplate the long history of Museum of Apostles (Havariler Museum). Here are some ideas for day two: contemplate in the serene atmosphere at Ani Cathedral and then explore the ancient world of Ani Antik Kenti.

To see traveler tips, other places to visit, more things to do, and more tourist information, go to the Kars sightseeing app .

You can drive from Diyarbakir to Kars in 7 hours. Alternatively, you can do a combination of flight and car. In May, Kars is slightly colder than Diyarbakir - with highs of 20°C and lows of 3°C. Wrap up your sightseeing by early afternoon on the 2nd (Tue) to allow time for travel to Erzurum.
more less

Things to do in Kars 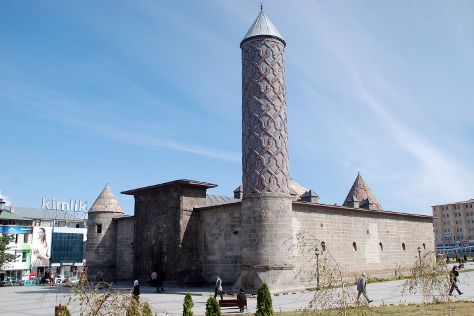 ©
Erzurum is a city in eastern Anatolia . Erzurum is known for historic sites, nature, and winter sports. Your plan includes some of its best attractions: admire the landmark architecture of Yakutiye Medresesi, contemplate in the serene atmosphere at Ulu Cami, delve into the distant past at Three Tombs, and don't miss a visit to Cobandede Koprusu.

To see other places to visit, photos, traveler tips, and other tourist information, you can read our Erzurum trip maker.

Traveling by car from Kars to Erzurum takes 3 hours. Expect a daytime high around 27°C in June, and nighttime lows around 7°C. Wrap up your sightseeing by early afternoon on the 5th (Fri) to allow enough time to travel back home.
more less

Things to do in Erzurum