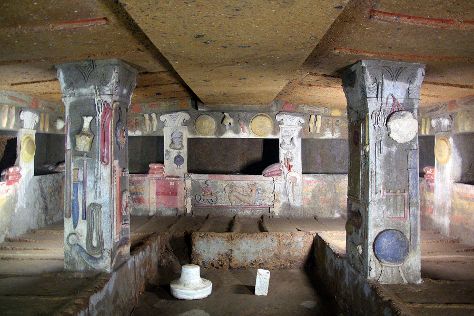 Emy Dey Magic Park has been added to your itinerary. On the 13th (Sat), get your game on at Emy Dey Magic Park, appreciate the extensive heritage of Necropoli di Cerveteri, step into the grandiose world of Castello Palo Odescalchi, then take an in-depth tour of Castello Odescalchi, then see the interesting displays at Museo Storico dell'Aeronautica Militare, and finally explore the ancient world of Rovine Canale Monterano. On the next day, stroll the grounds of Catacomba di Santa Savinilla, contemplate the long history of Bunker Soratte, then appreciate the extensive heritage of Bocchignano Borgo Medievale, then take in the architecture and atmosphere at Abbazia di Farfa, and finally contemplate in the serene atmosphere at Monastero Clarisse Eremite.

To find where to stay, reviews, photos, and more tourist information, refer to the Rome trip maker app .

Buenos Aires, Argentina to Rome is an approximately 16.5-hour flight. You can also do a combination of flight and train. Traveling from Buenos Aires to Rome, you'll lose 4 hours due to the time zone difference. Plan for little chillier nights when traveling from Buenos Aires in April since evenings lows in Rome dip to 11°C. Wrap up your sightseeing on the 15th (Mon) to allow time to drive to Castel Gandolfo.
more less

Castel Gandolfo is just a short distance from Rome. In April in Castel Gandolfo, expect temperatures between 22°C during the day and 11°C at night. Finish up your sightseeing early on the 12th (Sun) so you can travel back home.
more less

Things to do in Castel Gandolfo