The riverside capital of Laos, Vientiane still has a relatively small urban area and a laid-back, relaxed feel to it.

Let the collections at Lao Textile Museum and Icat Gallery capture your imagination. Your cultural itinerary includes sights like Great Sacred Stupa (Pha That Luang) and Wat Si Saket. Change things up with these side-trips from Vientiane: Nam Ngum Dam (in Thalat) and Mekong River (in Tha Heua). The adventure continues: stroll through Buddha Park, identify plant and animal life at Phou Khao Khouay National Bio-Diversity, browse the eclectic array of goods at Morning Market, and contemplate in the serene atmosphere at Wat Ong Teu.

To find where to stay, more things to do, maps, and tourist information, refer to the Vientiane journey planning app .

Newark, USA to Vientiane is an approximately 27-hour flight. You'll lose 12 hours traveling from Newark to Vientiane due to the time zone difference. When traveling from Newark in October, plan for somewhat warmer days in Vientiane, with highs around 89°F, while nights are warmer with lows around 75°F. Finish your sightseeing early on the 23rd (Wed) to allow enough time to travel to Sam Neua.
more less

Things to do in Vientiane 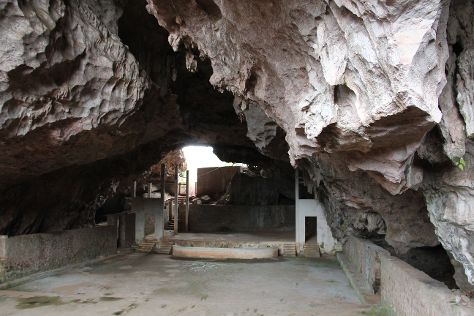 ©
Start off your visit on the 24th (Thu): explore the fascinating underground world of Pathet Lao Caves, Head underground at Vieng Xai Cave City, and then steep yourself in history at Hintang Houamuang.

You can fly from Vientiane to Sam Neua in 3 hours. Other options are to drive; or take a bus. On the 25th (Fri), you're off toPhonsavan.
more less

Things to do in Sam Neua

Houaphanh Province
Highlights from your plan 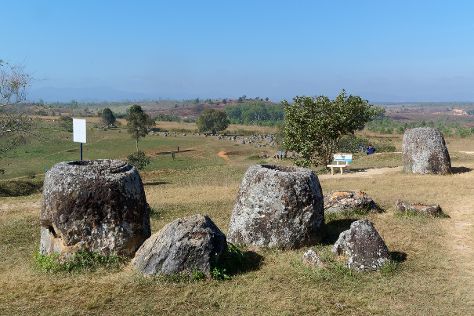 A base for explorations, the town of Phonsavan sits surrounded by impressive scenery and offers easy access to an abundance of cultural and historic sites.

Kick off your visit on the 26th (Sat): explore the different monuments and memorials at Vietnam War Memorial, stop by Hmong Sunday Market, take an in-depth tour of MAG UXO Visitor Information Centre, then get a sense of history and politics at Uxo Lao, then make a trip to The Plain of Jars, and finally contemplate the long history of Xieng Khouang Phonsavan Official Tourist Information Center.

To see more things to do, ratings, where to stay, and more tourist information, you can read our Phonsavan day trip tool .

You can drive from Sam Neua to Phonsavan in 4 hours. Alternatively, you can take a bus. Finish up your sightseeing early on the 26th (Sat) so you can travel to Huay Xai.
more less

Things to do in Phonsavan

©
The Plain of Jars

Overlooking the mighty Mekong River, Huay Xai serves as an important entry and exit point from Thailand into Laos.

You can fly from Phonsavan to Huay Xai in 3 hours. Other options are to drive; or do a combination of bus and ferry. Cap off your sightseeing on the 27th (Sun) early enough to catch the ferry to Pakbeng.
more less

Things to do in Huay Xai 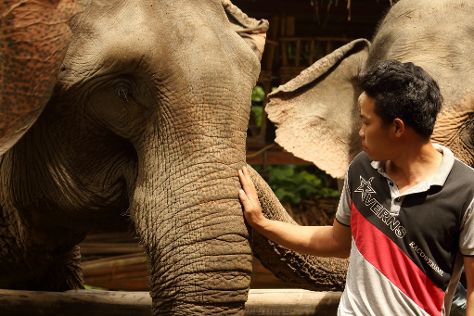 ©
Pak Beng is a small village in Laos, on the Mekong River about halfway between the Thai border at Huay Xai and Luang Prabang, Laos. Kick off your visit on the 28th (Mon): look for all kinds of wild species at Mekong Elephant Park.

You can plan Pakbeng trip in no time by asking Inspirock to help create your itinerary.

You can ride a ferry from Huay Xai to Pakbeng in 4 hours. Alternatively, you can drive. Wrap up your sightseeing by early afternoon on the 28th (Mon) to allow time for the car ride to Sayaboury.
more less

Things to do in Pakbeng 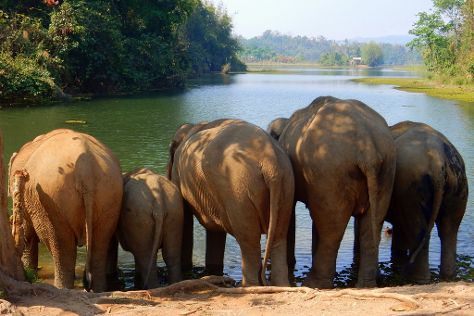 Sayabouru, a northern Laotian town and capital of the eponymous province, remains best known for its main attraction, the Elephant Conservation Center.

Kick off your visit on the 29th (Tue): identify plant and animal life at Elephant Conservation Center.

You can plan Sayaboury trip in no time by asking Inspirock to help create your itinerary.

Drive from Pakbeng to Sayaboury in 5 hours. In October, daytime highs in Sayaboury are 88°F, while nighttime lows are 72°F. On the 29th (Tue), wrap the sightseeing up by early afternoon so you can drive to Luang Prabang.
more less

Things to do in Sayaboury 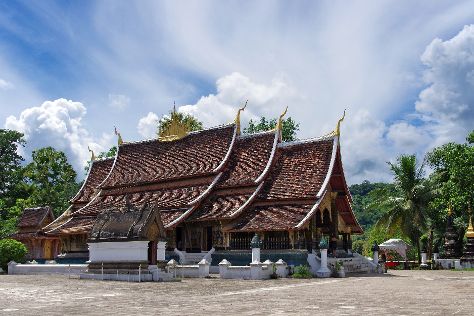 Designated a World Heritage Site in 1995, Luang Prabang sits at the meeting point of two rivers and offers numerous opportunities for sailing, climbing, and exploring scenic caves and waterfalls.

Take a break from the city and head to Kuang Si Waterfall and Mount Phousi. Museum-lovers will appreciate Royal Palace Museum and Traditional Arts and Ethnology Centre. When in Luang Prabang, make a side trip to see 100 Waterfalls in Nong Khiaw, approximately 52 minutes away. Next up on the itinerary: admire the landmark architecture of Golden City Temple (Wat Xieng Thong), don't miss a visit to Alms Giving Ceremony, experience rural life at The Living Land Company, and admire the sheer force of Nahm Dong Park.

To see where to stay, photos, other places to visit, and more tourist information, you can read our Luang Prabang trip planner .

Traveling by car from Sayaboury to Luang Prabang takes 3 hours. Alternatively, you can do a combination of taxi and bus. October in Luang Prabang sees daily highs of 89°F and lows of 71°F at night. Cap off your sightseeing on the 6th (Wed) early enough to travel to Savannakhet.
more less

Things to do in Luang Prabang

100 Waterfalls
Highlights from your plan

Just across the Mekong River from Thailand, the city of Savannakhet has benefited from its prosperous neighbor, developing its commercial and tourism sector.

Traveling by flight from Luang Prabang to Savannakhet takes 4.5 hours. Alternatively, you can drive; or take a bus. In November, daytime highs in Savannakhet are 88°F, while nighttime lows are 69°F. Finish your sightseeing early on the 7th (Thu) so you can travel to Champasak Town.
more less

Things to do in Savannakhet 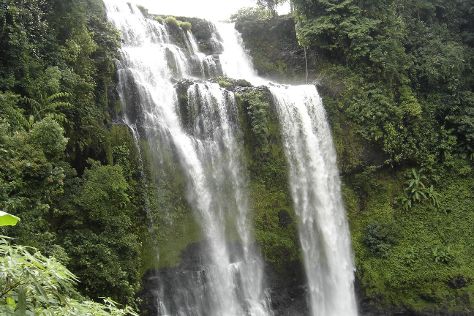 Near the borders of Thailand and Japan in southern Laos, the small town of Champasak is best known for its UNESCO-protected ruins.

Get some cultural insight at Wat Phu and Champasak Pottery. Get in touch with nature at Bolaven Plateau and Tad Pha Suam Waterfall. Venture out of the city with trips to Bolaven Plateau Waterfalls (in Tad Lo), Tad Fane (in Paksong) and Pakse (Wat Luang Temple, The Chinese Vat SopSe - Temple, & more). Next up on the itinerary: steep yourself in history at Wat Muang Kang Temple, step off the mainland to explore Don Daeng Island, and look for gifts at Chez Maman.

To see traveler tips, reviews, more things to do, and tourist information, you can read our Champasak Town trip website .

Things to do in Champasak Town 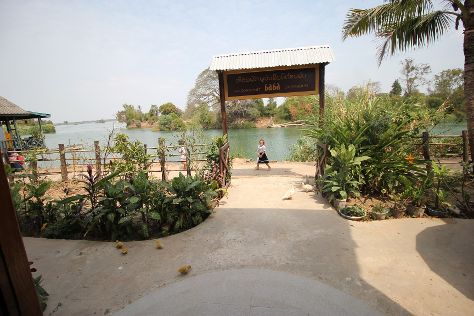 To see more things to do, reviews, and other tourist information, refer to the Don Loppadi day trip site .

Explore your travel options from Champasak Town to Don Loppadi with the Route module. Finish your sightseeing early on the 11th (Mon) to allow enough time to travel to Vang Vieng.
more less

Things to do in Don Loppadi 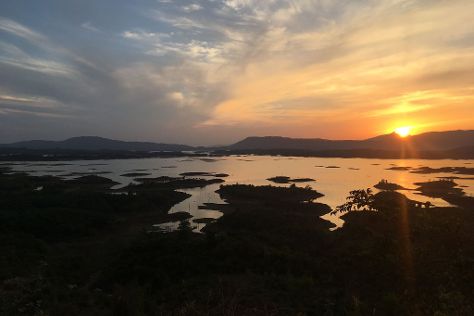 Get in touch with nature at Vang Vieng Elephant Sanctuary and Pha Ngern View Point. Get a sense of the local culture at Wat Kang and Wat That. The adventure continues: Head underground at Tham Phu Kham Cave and Blue Lagoon, explore the striking landscape at Tham Chang Cave, head outdoors with Kaeng Nyui Waterfalll, and see the sights as you ascend with a climbing tour.

Use the Route module to find suitable travel options from Don Loppadi to Vang Vieng. Wrap up your sightseeing on the 15th (Fri) early enough to travel back home.
more less

Things to do in Vang Vieng