Kick off your visit on the 1st (Thu): take in the views from Puente Zubizuri, then pause for some photo ops at Puppy, and then explore the world behind art at Guggenheim Museum Bilbao. Get ready for a full day of sightseeing on the next day: awaken your taste buds at some of the top wineries in the area.

To see more things to do, other places to visit, maps, and more tourist information, read Bilbao trip itinerary tool.

Bucharest, Romania to Bilbao is an approximately 8.5-hour flight. You can also drive; or do a combination of train and bus. You'll gain 1 hour traveling from Bucharest to Bilbao due to the time zone difference. Plan for somewhat warmer temperatures traveling from Bucharest in October, with highs in Bilbao at 26°C and lows at 14°C. Cap off your sightseeing on the 2nd (Fri) early enough to travel to Madrid.
more less

Madrid is known for museums, historic sites, and parks. Your plan includes some of its best attractions: admire the masterpieces at Prado National Museum, hunt for treasures at Mercado San Miguel, contemplate the long history of Plaza Mayor, and indulge your taste buds at Food & Drink.

For more things to do, traveler tips, photos, and tourist information, use the Madrid road trip planning site.

Traveling by flight from Bilbao to Madrid takes 3.5 hours. Alternatively, you can drive; or take a bus. In October, daily temperatures in Madrid can reach 26°C, while at night they dip to 13°C. Finish up your sightseeing early on the 6th (Tue) so you can travel to Granada.
more less

On the 7th (Wed), step into the grandiose world of Alhambra, admire the natural beauty at Generalife, and then admire the striking features of Royal Chapel of Granada. Here are some ideas for day two: awaken your taste buds at some of the top wineries in the area, then contemplate the long history of Mirador de San Nicolas, and then take a stroll through Albayzin.

To see photos, traveler tips, more things to do, and other tourist information, you can read our Granada online journey planner.

Getting from Madrid to Granada by flight takes about 4 hours. Other options: drive; or take a bus. In October in Granada, expect temperatures between 28°C during the day and 14°C at night. Cap off your sightseeing on the 8th (Thu) early enough to go by car to Nerja.
more less

©
Nerja is a municipality on the Costa del Sol in the province of Málaga in the autonomous community of Andalusia in southern Spain. Take a break from Nerja with a short trip to Los Olivillos in Competa, about 36 minutes away. The adventure continues: test your team's savvy at Torrenigma Escape Room, kick back and relax at Papagayo Beach, steep yourself in history at Punta Lara, and stroll through Playa de la Cala el Canuelo.

To find photos, more things to do, traveler tips, and other tourist information, you can read our Nerja trip planner.

Getting from Granada to Nerja by car takes about 1.5 hours. Other options: take a bus. In October, plan for daily highs up to 29°C, and evening lows to 14°C. Cap off your sightseeing on the 12th (Mon) early enough to go by car to Marbella.
more less

Change things up with these side-trips from Marbella: Malaga (World Aviation Helicopters, Wine Tours & Tastings, &more), Adventure Rider Centre (in Mijas Pueblo) and ToroTrail (in Alhaurin el Grande). There's lots more to do: see the sights as you ascend with a climbing tour, wander the streets of Marbella Old Town, cast your line with Borrasca Experience, and visit La Carihuela.

Drive from Nerja to Marbella in 1.5 hours. Alternatively, you can take a bus. Traveling from Nerja in October, expect a bit warmer with lows of 18°C in Marbella. Finish your sightseeing early on the 16th (Fri) to allow enough time to drive to Ronda.
more less

Ronda is known for historic sites, nature, and museums. Your plan includes some of its best attractions: do a tasting at Bodega Garcia Hidalgo, take in the views from Puente Nuevo, take in breathtaking views at El Tajo de Ronda, and walk around Alameda Del Tajo.

To see more things to do, photos, traveler tips, and other tourist information, refer to the Ronda road trip app.

You can drive from Marbella to Ronda in 1.5 hours. Another option is to take a bus. October in Ronda sees daily highs of 30°C and lows of 17°C at night. Finish up your sightseeing early on the 20th (Tue) so you can go by car to Seville.
more less

Seville is known for historic sites, nightlife, and parks. Your plan includes some of its best attractions: make a trip to Plaza de España, walk around Parque de Maria Luisa, admire the landmark architecture of Setas de Sevilla (Metropol Parasol), and awaken your taste buds at some of the top wineries in the area.

Getting from Ronda to Seville by car takes about 2 hours. Other options: take a bus; or take a train. October in Seville sees daily highs of 30°C and lows of 19°C at night. Wrap up your sightseeing on the 23rd (Fri) early enough to travel to Ibiza Town.
more less 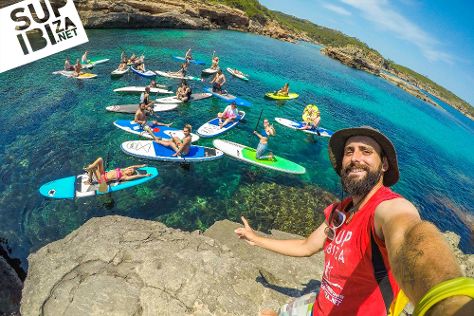 Ibiza Town is known for nightlife, beaches, and historic sites. Your plan includes some of its best attractions: glide peacefully along the water with Sup Ibiza, stroll through Cala Comte, kick back and relax at Platja de ses Salines, and examine the collection at Necropolis del Puig des Molins.

Plan a trip to Ibiza Town easily and quickly by telling Inspirock to suggest an itinerary.

Fly from Seville to Ibiza Town in 3 hours. Alternatively, you can do a combination of train, ferry, and bus; or do a combination of car and ferry. In October, daily temperatures in Ibiza Town can reach 28°C, while at night they dip to 20°C. Cap off your sightseeing on the 27th (Tue) early enough to travel to Barcelona.
more less

Barcelona is known for parks, nightlife, and museums. Your plan includes some of its best attractions: admire the striking features of Casa Batllo, take a stroll through Las Ramblas, take in the architecture and atmosphere at Basilica of the Sagrada Familia, and stop by El Barri Gòtic.

For photos, maps, other places to visit, and other tourist information, go to the Barcelona route builder site.

Traveling by flight from Ibiza Town to Barcelona takes 3 hours. Alternatively, you can ride a ferry; or do a combination of ferry and bus. In October in Barcelona, expect temperatures between 26°C during the day and 18°C at night. Cap off your sightseeing on the 31st (Sat) early enough to travel back home.
more less