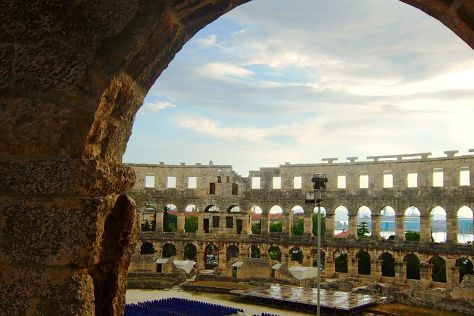 Change things up with these side-trips from Pula: Motovun (Hilltop Walled Ancient City of Motovun & Ancient City Walls), Kamenjak National Park (in Premantura) and Opatija (Lungo Mare, Volosko, & more). There's much more to do: delve into the distant past at Amphitheatre de Pula, admire the striking features of Arco dei Sergi, indulge in some culinary diversions at a local gastronomic tour, and see some colorful creatures with a scuba or snorkeling tour.

For ratings, where to stay, and tourist information, go to the Pula trip planner.

If you are flying in from Hungary, the closest major airports are Pula Airport, Zadar Airport and Zagreb Airport. In September in Pula, expect temperatures between 27°C during the day and 17°C at night. Wrap up your sightseeing on the 17th (Thu) early enough to travel back home.
more less