Rome is known for historic sites, nightlife, and museums. Your plan includes some of its best attractions: delve into the distant past at Colosseum, explore the world behind art at Musei Capitolini, admire the striking features of Pantheon, and steep yourself in history at St. Peter's Basilica.

To see where to stay, photos, other places to visit, and tourist information, read Rome trip itinerary app.

Melbourne, Australia to Rome is an approximately 25- hour flight. You can also do a combination of flight and train; or do a combination of bus and flight. The time zone difference moving from Australian Eastern Standard Time to Central European Standard Time is minus 9 hours. Traveling from Melbourne in July, expect Rome to be warmer, temps between 37°C and 24°C. Finish up your sightseeing early on the 4th (Sat) so you can travel to Barcelona.
more less

Barcelona is known for parks, nightlife, and museums. Your plan includes some of its best attractions: take in the architecture and atmosphere at Basilica of the Sagrada Familia, wander the streets of El Barri Gòtic, get to know the fascinating history of Las Ramblas, and admire the landmark architecture of Casa Mila - La Pedrera.

Traveling by flight from Rome to Barcelona takes 5.5 hours. Alternatively, you can do a combination of train and flight; or drive. Expect little chillier weather when traveling from Rome in July: highs in Barcelona hover around 34°C, while lows dip to 25°C. Wrap up your sightseeing on the 7th (Tue) to allow time to travel to Lisbon.
more less

Step out of Lisbon to go to Sintra and see Quinta da Regaleira, which is approximately 36 minutes away. There's lots more to do: don't miss a visit to Belém Tower, get the lay of the land with Walking tours, get engrossed in the history at Carmo Archaeological Museum, and appreciate the history behind Padrao dos Descobrimentos.

To see maps, other places to visit, ratings, and more tourist information, you can read our Lisbon trip builder tool.

Traveling by flight from Barcelona to Lisbon takes 5 hours. Alternatively, you can drive; or take a train. The time zone changes from Central European Standard Time (CET) to Western European Standard Time (WET), which is usually a -1 hour difference. Plan for little chillier nights when traveling from Barcelona in July since evenings lows in Lisbon dip to 20°C. Wrap up your sightseeing on the 10th (Fri) to allow time to travel to London.
more less

London is known for museums, nightlife, and historic sites. Your plan includes some of its best attractions: explore the world behind art at National Gallery, take an in-depth tour of Natural History Museum, make a trip to Coca-Cola London Eye, and take in panoramic vistas at Tower Bridge.

Step out of Paris to go to Versailles and see Palace of Versailles, which is approximately 48 minutes away. Next up on the itinerary: explore and take pictures at Eiffel Tower, take in the architecture and atmosphere at Basilique du Sacre-Coeur de Montmartre, admire the striking features of Sainte-Chapelle, and take a stroll through Île de la Cité.

For reviews, maps, photos, and other tourist information, refer to the Paris journey maker tool.

Traveling by train from London to Paris takes 2.5 hours. Alternatively, you can do a combination of train and flight; or do a combination of car and train. Traveling from London to Paris, you'll lose 1 hour due to the time zone difference. When traveling from London in July, plan for a bit warmer days in Paris, with highs around 30°C, while nights are about the same with lows around 18°C. Finish your sightseeing early on the 16th (Thu) to allow enough time to take a train to Amsterdam.
more less

Amsterdam is known for museums, nightlife, and breweries & distilleries. Your plan includes some of its best attractions: explore the world behind art at Rijksmuseum, stroll around Vondelpark, engage your brain at NEMO Science Museum, and get engrossed in the history at Anne Frank House.

To find maps, photos, where to stay, and more tourist information, use the Amsterdam travel site.

Traveling by train from Paris to Amsterdam takes 3.5 hours. Alternatively, you can fly; or drive. Traveling from Paris in July, expect nights in Amsterdam to be about the same, around 16°C, while days are little chillier, around 26°C. Finish your sightseeing early on the 19th (Sun) so you can travel to Mykonos Town.
more less 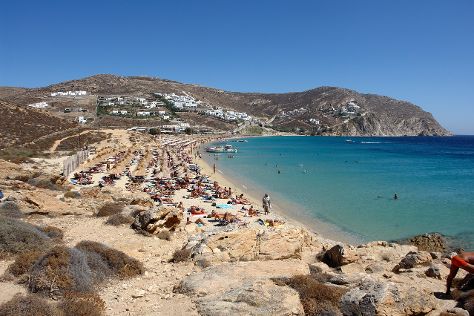 Explore the numerous day-trip ideas around Mykonos Town: Archaeological Site of Delos (in Delos), Agios Prokopios Beach (in Agios Prokopios) and Naxos Town (Portara & Old Town). There's still lots to do: stop by Little Venice, get engrossed in the history at Archaeological Museum of Mykonos, examine the collection at Aegean Maritime Museum, and enjoy the sand and surf at Panormos Beach. 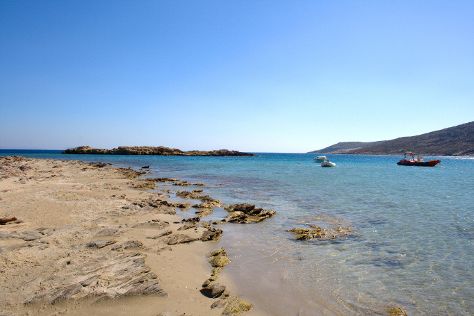 Halfway between Naxos and Santorini lies tiny Ios, famous worldwide as one of the Aegean's liveliest nightlife hubs.

Explore Ios' surroundings by going to Sikinos (The Virgin Pandohara Elytis & The Zoodohos Pigi monastery). There's lots more to do: stroll through Manganari Beach, kick back and relax at Koumbara Beach, don't miss a visit to La Tomba di Omero, and pause for some serene contemplation at Panagia Gremiotissa Church.

Plan my Ios trip by asking Inpirock to come up with tips and suggestions.

You can drive from Mykonos Town to Ios in 4.5 hours. July in Ios sees daily highs of 34°C and lows of 26°C at night. Wrap up your sightseeing on the 31st (Fri) early enough to drive back home.
more less

Things to do in Ios