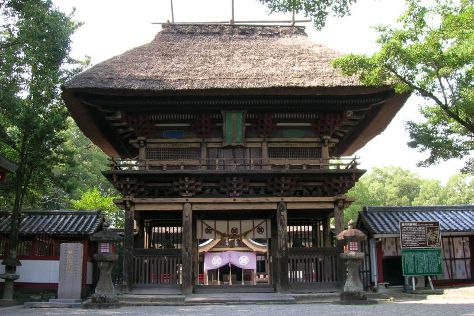 ©
Yatsushiro is a city located in Kumamoto Prefecture, Japan.As of March 31, 2017, the city has an estimated population of 129,358 and a population density of 190 persons per km2. Attractions like Aoiaso Shrine and Gamadasu Dome (Mt. Unzen Disaster Memorial Hall) make great kid-friendly stops. Change things up with these side-trips from Yatsushiro: Okoshiki Beach (in Uto), Shimabara Castle (in Shimabara) and Amakusa Gokyo Bridge (in Kamiamakusa). The adventure continues: explore the historical opulence of Yatsushiro Castle Remains, get in on the family fun at Dolphin Marine World, and take in the dramatic scenery at Sendantodoro Falls.

To see traveler tips, ratings, more things to do, and other tourist information, refer to the Yatsushiro driving holiday planner.

If you are flying in from Philippines, the closest major aiports are Fukuoka Airport and Kagoshima Airport. In August, plan for daily highs up to 36°C, and evening lows to 27°C. Cap off your sightseeing on the 26th (Mon) early enough to travel back home.
more less

Things to do in Yatsushiro