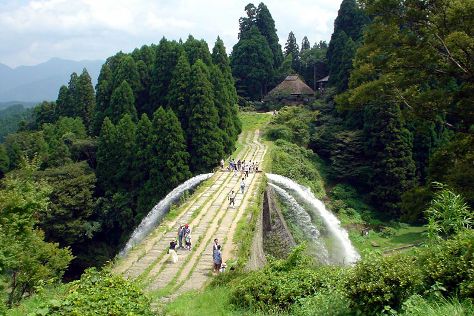 ©
Yatsushiro is a city located in Kumamoto Prefecture, Japan.As of March 31, 2017, the city has an estimated population of 129,358 and a population density of 190 persons per km2. Change things up with these side-trips from Yatsushiro: Kamiamakusa (Ai no Amakusamura & Amakusa Gokyo Bridge), Unzen (Unzen Jigoku (Unzen Hell) & Onsen Resorts) and Tsujun Bridge (in Yamato-cho). There's still lots to do: step into the grandiose world of Yatsushiro Castle Remains, take a leisurely stroll along Shimabara Gaiko Seaport, snap pictures at Momigi Suspension Bridge, and admire the sheer force of Sendantodoro Falls.

To see reviews, other places to visit, more things to do, and more tourist information, refer to the Yatsushiro trip planner.

If you are flying in from Philippines, the closest major aiports are Fukuoka Airport and Kagoshima Airport. In September, daytime highs in Yatsushiro are 32°C, while nighttime lows are 23°C. Wrap up your sightseeing on the 23rd (Mon) early enough to travel back home.
more less

Things to do in Yatsushiro