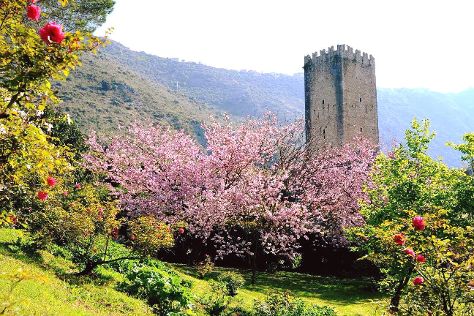 ©
Terracina is a city and comune of the province of Latina - (until 1934 of the province of Rome), Italy, 76km southeast of Rome by rail and 56km by the Via Appia by car.HistoryAncient timesTerracina appears in ancient sources with two names: the Latin Tarracina and the Volscian Anxur. Your inner history buff will appreciate Sanctuary of Giove Anxur and Villa Di Tiberio. Visiting Spiaggia di Serapo and Spiaggia 300 Gradini will get you outdoors. Get out of town with these interesting Terracina side-trips: Grotte di Falvaterra (in Falvaterra), Sermoneta (Castello Caetani & Chiesa di San Michele Arcangelo) and Giardino di Ninfa (in Cisterna di Latina). And it doesn't end there: explore the fascinating underground world of Caves of Pastena, take in the architecture and atmosphere at Cattedrale di Terracina, get to know the fascinating history of Old Town, and delve into the distant past at Foro Emiliano.

To see where to stay, more things to do, photos, and tourist information, you can read our Terracina trip planner.

If you are flying in from Philippines, the closest major aiports are Leonardo da Vinci–Fiumicino Airport, Ciampino–G. B. Pastine International Airport and Naples International Airport. Expect a daytime high around °C in October, and nighttime lows around °C. Finish your sightseeing early on the 14th (Wed) to allow enough time to travel back home.
more less