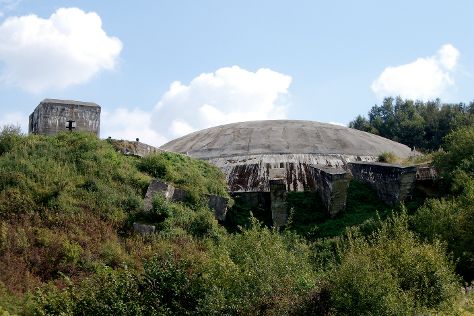 Saint-Omer in the Pas-de-Calais department is the starting point for the canals radiating out from the river Aa with a diverse population.

Change things up with these side-trips from Saint-Omer: Etaples Military Cemetery (in Etaples), Le Touquet Beach (in Le Touquet – Paris-Plage) and Calais Wine Superstore (in Calais). There's much more to do: brush up on your military savvy at La Coupole, contemplate the long history of Saint-Omer Cathedrale, contemplate in the serene atmosphere at Ruines de l'Abbaye Saint-Bertin, and admire the landmark architecture of La Motte Castrale Et Sa Prison.

To find topicsMoreInfo.option.ratings, maps, more things to do, and other tourist information, use the Saint-Omer journey tool .

If you are flying in from United Kingdom, the closest major aiports are Charles de Gaulle International Airport, Lille-Lesquin Airport and Paris Beauvais Tillé Airport. July in Saint-Omer sees daily highs of 23°C and lows of 15°C at night. Wrap up your sightseeing on the 12th (Sun) early enough to travel back home.
more less

Things to do in Saint-Omer