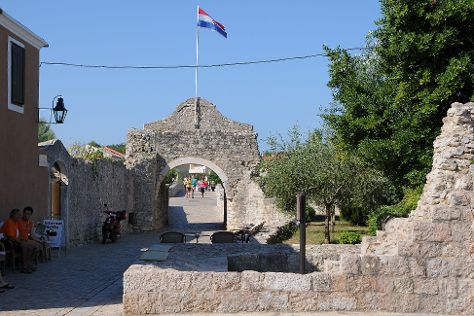 Nin is a town in the Zadar County of Croatia, population 1,132, total municipality population 2,744 .Nin was historically important as a centre of a medieval Christian Bishopric. Explore Nin's surroundings by going to Church Sv. Duh (in Posedarje), Fortica Castle (in Novigrad) and Vecka Kula (in Starigrad-Paklenica). And it doesn't end there: enjoy the sand and surf at Nin's Lagoon, pause for some serene contemplation at church of san anselm, make a trip to The Old Croatian Boat Condura Croatica, and take in the views from Stone Bridge and the Old Gate.

To see reviews, photos, other places to visit, and other tourist information, go to the Nin trip itinerary planner.

If you are flying in from Lithuania, the closest major aiports are Zadar Airport, Split Airport and Pula Airport. In June, daytime highs in Nin are °C, while nighttime lows are °C. Wrap up your sightseeing on the 27th (Sat) to allow time to travel back home.
more less

Stone Bridge and the Old Gate

©
The Church of the Holy Cross
See also:
Notifications: