Change things up with these side-trips from Positano: Spiaggia di Atrani (in Atrani), Amalfi (Duomo di Sant'Andrea & Torre dello Ziro) and Lido di Ravello (in Castiglione). The adventure continues: tour the pleasant surroundings at Fornillo, steep yourself in history at Villa Rufolo, enjoy the sand and surf at Spiaggia Grande, and hike along Ravello-Minori Walk.

For where to stay, traveler tips, maps, and other tourist information, go to the Positano online route planner . 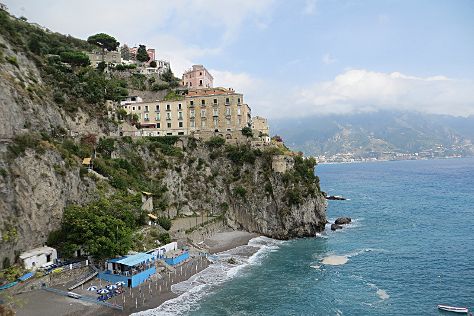 ©
Vietri sul Mare is a town and comune in the province of Salerno, in the Campania region of southern Italy. Explore Vietri sul Mare's surroundings by going to Minori (Spiaggia Di Minori & Villa Romana e Antiquarium), Maiori (Spiaggia - Hotel Sole Splendid, Boat Tours & Water Sports, &more) and Basilica (in Pompeii). There's still lots to do: tour the pleasant surroundings at Spiaggia di castiglione, kick back and relax at Spiaggia Lannio, get outside with Monte Finestra, and explore the ancient world of Pompeii Archaeological Park.

You can ride a ferry from Positano to Vietri sul Mare in 1.5 hours. Other options are to drive; or take a bus. In September, plan for daily highs up to 30°C, and evening lows to 24°C. Wrap up your sightseeing on the 21st (Mon) early enough to travel to Rome.
more less

Things to do in Vietri sul Mare

Rome is known for historic sites, nightlife, and museums. Your plan includes some of its best attractions: delve into the distant past at Colosseum, explore the world behind art at Vatican Museums, get to know the fascinating history of Piazza Navona, and steep yourself in history at Palatine Hill.

Explore the numerous day-trip ideas around Florence: Siena (Fontebranda, Basilica Cateriniana Di S. Domenico, &more). Next up on the itinerary: steep yourself in history at Cathedral of Santa Maria del Fiore, make a trip to Piazzale Michelangelo, pause for some serene contemplation at Basilica of Santa Croce, and take in the spiritual surroundings of The Baptistery of St. John.

Take a train from Rome to Florence in 2 hours. Alternatively, you can drive; or fly. In September, plan for daily highs up to 30°C, and evening lows to 17°C. Finish your sightseeing early on the 1st (Thu) to allow enough time to take a train to Milan.
more less

Siena
Highlights from your plan

Explore the numerous day-trip ideas around Milan: Cathedral of Como (Duomo) (in Como), Sentee di Sort (in Cernobbio) and Forte Montecchio Nord (in Colico). And it doesn't end there: contemplate in the serene atmosphere at Duomo di Milano, contemplate the long history of Castello Sforzesco, explore the stunning scenery at Orrido di Bellano, and stroll through Riva Bianca Beach.

To see traveler tips, other places to visit, maps, and more tourist information, use the Milan trip itinerary planner.

Take a train from Florence to Milan in 2 hours. Alternatively, you can drive; or fly. Expect a bit cooler weather when traveling from Florence in October: highs in Milan hover around 21°C, while lows dip to 13°C. Wrap up your sightseeing on the 5th (Mon) early enough to take a train to Venice.
more less

Go for a jaunt from Venice to Padua to see Scrovegni Chapel about 54 minutes away. And it doesn't end there: contemplate the waterfront views at Canal Grande, examine the collection at Doge's Palace, enjoy breathtaking views from St Mark's Campanile, and contemplate the long history of Ponte dei Sospiri.

Getting from Milan to Venice by train takes about 2.5 hours. Other options: drive; or do a combination of flight and train. Expect a daytime high around 22°C in October, and nighttime lows around 12°C. On the 9th (Fri), wrap the sightseeing up by early afternoon so you can travel back home.
more less

Scrovegni Chapel
Highlights from your plan