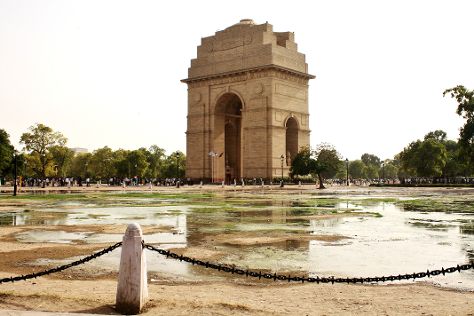 Get some cultural insight at Humayun's Tomb and India Gate. Red Fort (Lal Quila) and Akshardham will appeal to history buffs. There's still lots to do: steep yourself in history at Gurudwara Bangla Sahib, wander the streets of Hauz Khas Village, indulge in some personalized pampering at some of the best spas, and appreciate the extensive heritage of Lodhi Garden.

For ratings, traveler tips, more things to do, and more tourist information, go to the New Delhi day trip website .

To find ratings, other places to visit, traveler tips, and other tourist information, go to the Kanpur trip maker website .

The Route module can help you plan travel from New Delhi to Kanpur. Traveling from New Delhi in January, you can expect nighttime temperatures to be a bit warmer in Kanpur, with lows of 52°F. Cap off your sightseeing on the 17th (Fri) early enough to travel to Daulatabad.
more less

Things to do in Kanpur 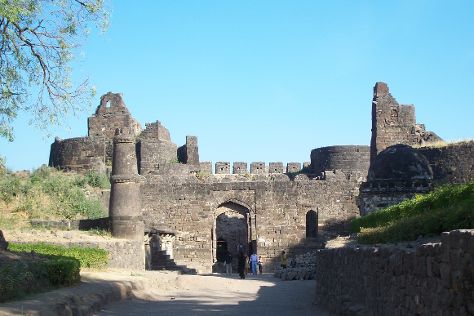 ©
Start off your visit on the 18th (Sat): make a trip to Chand Minar, then explore the ancient world of Daulatabad Fort, and then step into the grandiose world of Mughal Palace.

To find where to stay, photos, maps, and other tourist information, go to the Daulatabad trip maker app .

Use the Route module to find suitable travel options from Kanpur to Daulatabad. Traveling from Kanpur in January, you will find days in Daulatabad are somewhat warmer (84°F), and nights are about the same (56°F). Cap off your sightseeing on the 18th (Sat) early enough to travel to Nanded.
more less

Things to do in Daulatabad

©
Nanded is a city in Maharashtra state (western central India), the 8th largest urban agglomeration of the state and the 81st most populous city in India. On the 19th (Sun), take in the spiritual surroundings of Takhat Sachkhand Sri Hazur Abchalnagar Sahib and then admire the striking features of Hazur Sahib.

To find photos, reviews, more things to do, and tourist information, use the Nanded route planning site .

Traveling by car from Daulatabad to Nanded takes 6 hours. Wrap up your sightseeing on the 19th (Sun) early enough to travel to Bengaluru.
more less

Things to do in Nanded

Flourishing development and a bustling IT industry transformed Bangalore into a vibrant metropolis, but the city preserves its numerous historic and cultural sights.

Get a sense of the local culture at Commercial Street and Basavanagudi. Your inner history buff will appreciate ISKCON Temple Bangalore and Bangalore Palace. There's still lots to do: take a stroll through Malleswaram, take in the spiritual surroundings of Sri Guruvayur and Ashtalakshmi Temple, look for all kinds of wild species at Bannerghatta National Park, and take in nature's colorful creations at Lalbagh Botanical Garden.

Getting from Nanded to Bengaluru by car takes about 14.5 hours. Other options: fly. Expect a daytime high around 81°F in January, and nighttime lows around 59°F. Wrap up your sightseeing on the 23rd (Thu) to allow time to drive to Mysuru (Mysore).
more less

Things to do in Bengaluru

A historic and culturally distinctive city, Mysuru (Mysore) has all the stories, artworks, and architecture you'd hope to find in the former capital city of a rich kingdom.

Popular historic sites such as Mysore Palace (Amba Vilas) and Namdroling Monastery are in your itinerary. Get some cultural insight at Sri Chamundeshwari Temple and R K Narayan House. Step out of Mysuru (Mysore) with an excursion to Jal bagh in Srirangapatna--about 34 minutes away. Next up on the itinerary: soothe aching muscles at some of the top local wellness centers, see the interesting displays at Sea Shell Museum, get up close and personal with brilliant marine life at Planet Earth Aquarium, and take in the spiritual surroundings of Sri Nandi Temple.

For where to stay, ratings, other places to visit, and more tourist information, go to the Mysuru (Mysore) online trip maker .

Traveling by car from Bengaluru to Mysuru (Mysore) takes 3 hours. Alternatively, you can take a train; or take a bus. In January, daytime highs in Mysuru (Mysore) are 78°F, while nighttime lows are 62°F. Wrap up your sightseeing on the 26th (Sun) early enough to drive to Ooty (Udhagamandalam).
more less

Things to do in Mysuru (Mysore)

Jal bagh
Highlights from your plan

Tea gardens and eucalyptus trees scent the air of the fields surrounding Ooty, a popular summer tourism destination up in the hills.

On the 27th (Mon), see the interesting displays at Tea Museum, take in the awesome beauty at Doddabetta Peak, then take in nature's colorful creations at Botanical Gardens, and finally take in the spiritual surroundings of Elk Hill Murugan Temple. On the next day, explore the activities along Ooty Lake and then play a few rounds at Wellington Gymkhana Club Golf Course.

To see where to stay, ratings, other places to visit, and tourist information, read Ooty (Udhagamandalam) trip planner.

Traveling by car from Mysuru (Mysore) to Ooty (Udhagamandalam) takes 3.5 hours. Alternatively, you can take a bus. In January, plan for daily highs up to 78°F, and evening lows to 62°F. Wrap up your sightseeing on the 28th (Tue) early enough to travel to Patna.
more less

Things to do in Ooty (Udhagamandalam)

Occupying the southern bank of the famous Ganges River, the state capital of Patna combines an important religious and regal heritage with a fast-growing commercial and transport hub.

You can do a combination of taxi and flight from Ooty (Udhagamandalam) to Patna in 6.5 hours. Other options are to drive; or do a combination of taxi and train. Prepare for little chillier weather when traveling from Ooty (Udhagamandalam) in January: high temperatures in Patna hover around 69°F and lows are around 49°F. Wrap up your sightseeing on the 29th (Wed) to allow time to travel to Kolkata (Calcutta).
more less

Things to do in Patna

On the 30th (Thu), steep yourself in history at Sri Sri Iswar Madan Mohan Jew, take in the spiritual surroundings of Dakshineswar Kali Temple, then stop by Kumortuli, and finally wander the streets of Park Street. Get ready for a full day of sightseeing on the next day: contemplate in the serene atmosphere at Kalighat Kali Temple, then see the interesting displays at Raja Rammohun Roy Memorial Museum, then learn more about the world around you at Indian Museum (Jadu Ghar), and finally take an in-depth tour of Kolkata Tram Museum Smaranika.

For traveler tips, reviews, more things to do, and more tourist information, go to the Kolkata (Calcutta) visit planning app .

You can fly from Patna to Kolkata (Calcutta) in 3 hours. Alternatively, you can drive; or take a train. In January, Kolkata (Calcutta) is a bit warmer than Patna - with highs of 77°F and lows of 55°F. On the 1st (Sat), wrap the sightseeing up by early afternoon so you can travel to Hyderabad.
more less

Teeming with history and heritage, Hyderabad draws visitors from all over the world with its old Indo-Islamic buildings, forts, and museums.

On the 2nd (Sun), don't miss a visit to Tadbund Sri Veeranjaneya Swamy Temple, then step into the grandiose world of Golconda Fort, and then wander the streets of Shilparamam. Get ready for a full day of sightseeing on the 3rd (Mon): make a trip to Charminar, then explore the world behind art at Salar Jung Museum, and then take in the spiritual surroundings of Birla Mandir.

To plan Hyderabad vacation without wasting time, ask Inspirock to design an itinerary.

You can fly from Kolkata (Calcutta) to Hyderabad in 5 hours. Other options are to drive; or take a train. When traveling from Kolkata (Calcutta) in February, plan for a bit warmer days in Hyderabad, with highs around 91°F, while nights are about the same with lows around 65°F. Wrap up your sightseeing by early afternoon on the 4th (Tue) to allow time for travel back home.
more less

Things to do in Hyderabad