The state's commercial, if not political hub, Ahmedabad stands as a sprawling metropolis with some important historical sites.

Bring the kids along to Kankaria Lake and Indroda Nature Park. Explore Ahmedabad's surroundings by going to Shree Ranchhodray Ji Mandir (in Kheda) and Adalaj Trimandir (in Gandhinagar). There's lots more to do: contemplate the long history of Sabarmati Ashram / Mahatma Gandhi's Home, contemplate in the serene atmosphere at Jami Masjid, admire the striking features of Sidi Saeed Mosque, and test your problem-solving skills at popular escape rooms.

To see other places to visit, reviews, and more tourist information, you can read our Ahmedabad trip itinerary builder site .

Amritsar to Ahmedabad is an approximately 4-hour flight. You can also do a combination of flight and train; or drive. In December, Ahmedabad is a bit warmer than Amritsar - with highs of 34°C and lows of 15°C. Finish your sightseeing early on the 10th (Tue) so you can drive to Mehsana.
more less

Things to do in Ahmedabad

©
Mehsana, also spelled Mahesana, is a city and municipality in Mehsana district, in the Indian state of Gujarat.HistoryMehsaji Chavda, a Rajput and an heir of Chavda dynasty, established Mehsana. Start off your visit on the 11th (Wed): don't miss a visit to Shree Umiya Mata Temple and then contemplate in the serene atmosphere at Shri Toda Bahuchar Maa( Bahuchar Mataji Pragatya Sthal). Here are some ideas for day two: take in the spiritual surroundings of Simandhar Swami Jain Temple, delve into the distant past at Sun Temple, and then take in the spiritual surroundings of Maatangi Modheshwari Temple.

To find reviews, ratings, photos, and other tourist information, go to the Mehsana tour itinerary builder .

Drive from Ahmedabad to Mehsana in 2 hours. Expect a daytime high around 34°C in December, and nighttime lows around 15°C. Finish your sightseeing early on the 12th (Thu) to allow enough time to travel to Bhuj.
more less

Things to do in Mehsana

Established long ago as an important regional city, Bhuj has had to rebuild on several occasions due to devastating earthquakes destroying its temples, palaces, and residential areas.

Kids will appreciate attractions like Dattatreya Temple at Kalo Dungar and Hiralakshmi Memorial Craft Park. You'll find plenty of places to visit near Bhuj: Tera Fort (in Kutch) and Mandvi (Jain Temple & Vijay Vilas Palace). There's lots more to do: explore the fascinating landscape at White Desert Of Kutch, don't miss a visit to Bhujia Fort, examine the collection at Aina Mahal, and explore the historical opulence of Pragmahal Palace.

For more things to do, photos, where to stay, and other tourist information, you can read our Bhuj trip planner .

Getting from Mehsana to Bhuj by car takes about 6.5 hours. In December, daily temperatures in Bhuj can reach 35°C, while at night they dip to 16°C. Wrap up your sightseeing on the 16th (Mon) early enough to drive to Dwarka.
more less

Things to do in Bhuj

Way out west, the small city of Dwarka has a long history of pilgrimage, as a place central to Hindu mythology and belief.

Family-friendly places like Shree Dwarkadhish Temple and Rukshamanee Mandir will thrill your kids. Next up on the itinerary: step off the mainland to explore Beyt Dwarika, make a trip to Shri Swaminarayan Mandir, Dwarka, kick back and relax at Sivrajpur Beach, and contemplate in the serene atmosphere at Nageshwar Jyotirlinga Temple.

To find more things to do, reviews, and other tourist information, read Dwarka trip planner.

Traveling by car from Bhuj to Dwarka takes 6 hours. Alternatively, you can take a bus. Finish your sightseeing early on the 19th (Thu) to allow enough time to drive to Porbandar.
more less

Things to do in Dwarka

©
Porbandar is a coastal city in the Indian state of Gujarat, perhaps best known for being the birthplace of Mahatma Gandhi and Sudama (friend of Lord Krishna). Attractions like Kirti Mandir Temple and Porbandar Beach make great kid-friendly stops. Next up on the itinerary: enjoy the sand and surf at Madhavpur Beach, stroll through Chowpaty Beach, delve into the distant past at Ghumli, and take in the spiritual surroundings of Sri Hari Mandir Temple.

To see photos, reviews, traveler tips, and other tourist information, you can read our Porbandar travel itinerary planner .

Getting from Dwarka to Porbandar by car takes about 2.5 hours. In December, plan for daily highs up to 36°C, and evening lows to 18°C. Finish up your sightseeing early on the 23rd (Mon) so you can travel to Somnath.
more less

Things to do in Porbandar 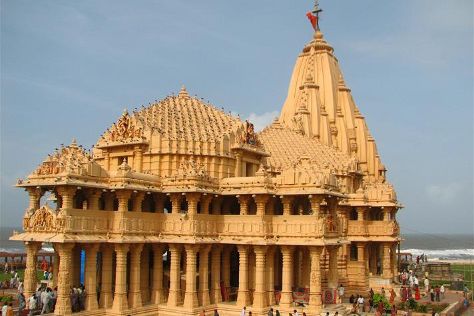 Tourism in Somnath (officially known as Prabhas Patan) revolves around its famous Jyotirlinga of Shiva.

You'll visit kid-friendly attractions like Somnath Mahadev Temple and Gir National Park and Wildlife Sanctuary. Go for a jaunt from Somnath to Sasan Gir to see Devalia Safari Park about 1h 15 min away. There's lots more to do: take in the spiritual surroundings of Bhalka Tirth, make a trip to Gita Mandir, and enjoy the sand and surf at Somnath Beach.

To see maps, other places to visit, reviews, and tourist information, use the Somnath driving holiday planner.

You can drive from Porbandar to Somnath in 3 hours. Finish up your sightseeing early on the 26th (Thu) so you can travel to Vadodara.
more less

Things to do in Somnath 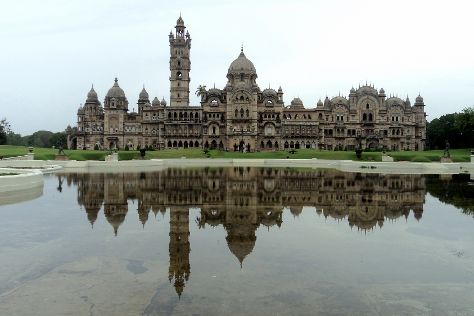 Tourism in Vadodara, the cultural capital of Gujarat, thrives on four major palace complexes, great regional dance performances, gardens and galleries, and a number of museums offering a wide variety of events, activities, and things to see.

Kids will enjoy Sayaji Baug and Nilkanthdham Swaminarayan Temple Poicha. Get out of town with these interesting Vadodara side-trips: Kayavarohan Shiva Temple (in Kayavarohan) and Bharuch (Golden Bridge, Guman Dev Mandir Temple, & more). There's still lots to do: explore the historical opulence of Lukshmi Vilas Palace, take in the spiritual surroundings of EME Temple, buy something for everyone on your list at Inorbit Mall Vadodara, and examine the collection at Maharaja Fatesingh Museum.

To see more things to do, other places to visit, maps, and more tourist information, go to the Vadodara day trip app .

Things to do in Vadodara