Start off your visit on the 11th (Wed): admire the landmark architecture of Schonbrunn Palace, steep yourself in history at Belvedere Palace, and then take in the spiritual surroundings of Karlskirche. Get ready for a full day of sightseeing on the next day: take an in-depth tour of Heeresgeschichtliches Museum, thenbrowse the eclectic array of goods at Vienna Naschmarkt, thenget to know the resident critters at Schönbrunn Zoo, and finally admire the landmark architecture of Cafe Gloriette.

To see other places to visit, traveler tips, more things to do, and other tourist information, use the Vienna sightseeing planner.

New Delhi, India to Vienna is an approximately 10-hour flight. Traveling from New Delhi to Vienna, you'll gain 4.5 hours due to the time zone difference. When traveling from New Delhi in December, plan for colder days in Vienna, with highs around °C, while nights are little chillier with lows around °C. Wrap up your sightseeing on the 13th (Fri) early enough to travel to Prague.
more less

You'll find plenty of places to visit near Prague: Karlstejn Castle (in Karlstejn) and Pilsner Urquell Brewery (in Pilsen). And it doesn't end there: pause for some photo ops at Vyšehrad National Cultural Monument, have fun at Outback Prague Shooting Range, have some family-friendly fun at Thrill Park - Prague's Horror Theme Park, and stroll around Vyšehradské sady.

To see photos, reviews, more things to do, and more tourist information, refer to the Prague holiday maker site.

You can fly from Vienna to Prague in 3.5 hours. Other options are to drive; or take a shuttle. In December, plan for daily highs up to °C, and evening lows to °C. Finish your sightseeing early on the 16th (Mon) to allow enough time to drive to Berlin.
more less 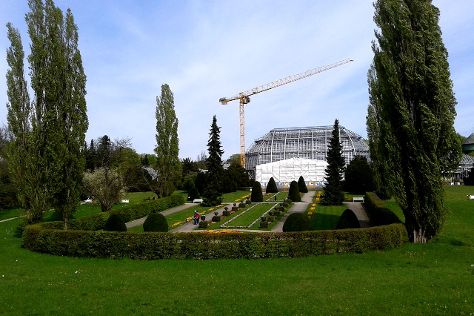 On the 17th (Tue), see where the action happens at Alte Forsterei, explore the historical opulence of Schloss Pfaueninsel, thenexplore the galleries of Haus der Wannsee-Konferenz, and finally walk around Botanical Garden and Botanical Museum Berlin-Dahlem.

For more things to do, photos, where to stay, and more tourist information, read our Berlin tour builder.

Traveling by car from Prague to Berlin takes 3.5 hours. Alternatively, you can take a shuttle; or take a bus. Finish your sightseeing early on the 18th (Wed) so you can travel to Amsterdam.
more less

To find maps, where to stay, reviews, and other tourist information, read Amsterdam trip planner.

Fly from Berlin to Amsterdam in 4.5 hours. Alternatively, you can drive; or take a train. In December, daytime highs in Amsterdam are °C, while nighttime lows are °C. Wrap up your sightseeing on the 21st (Sat) to allow time to travel to London.
more less

Traveling by flight from Amsterdam to London takes 4 hours. Alternatively, you can take a train; or do a combination of car and train. The time zone changes from Central European Standard Time (CET) to Greenwich Mean Time (GMT), which is usually a -1 hour difference. In December in London, expect temperatures between °C during the day and °C at night. Wrap up your sightseeing on the 24th (Tue) to allow time to take a train to Paris.
more less

Get out of town with these interesting Paris side-trips: Versailles (The Hall of Mirrors, Palace of Versailles, &more), Chateau de Vaux-le-Vicomte (in Maincy) and Chartres Cathedral (in Chartres). The adventure continues: step into the grandiose world of Chateau de Fontainebleau, stroll around Parc Montsouris, make a trip to Cite Florale, and pause for some serene contemplation at Eglise Notre-Dame-de-Chine.

For maps, traveler tips, where to stay, and other tourist information, read our Paris tour planner.

You can take a train from London to Paris in 3.5 hours. Alternatively, you can fly; or do a combination of car and train. The time zone difference moving from Greenwich Mean Time (GMT) to Central European Standard Time (CET) is 1 hour. In December, daily temperatures in Paris can reach °C, while at night they dip to °C. Wrap up your sightseeing on the 28th (Sat) to allow time to travel to Interlaken.
more less

To see reviews, maps, photos, and other tourist information, refer to the Interlaken road trip app.

You can do a combination of flight, bus, and train from Paris to Interlaken in 5.5 hours. Alternatively, you can take a train; or drive. Plan for slightly colder temperatures traveling from Paris in December, with highs in Interlaken at °C and lows at °C. Cap off your sightseeing on the 30th (Mon) early enough to go by car to Zurich.
more less

On the 31st (Tue), take in the views from Chapel Bridge, thenexplore the activities along Lake Zurich, and then take an unorthodox tour of Nerves. Get ready for a full day of sightseeing on the 1st (Wed): take in the architecture and atmosphere at Kirche Enge and then take in the awesome beauty at Uetliberg Mountain.

To find where to stay, more things to do, ratings, and other tourist information, you can read our Zurich day trip planning app.

Traveling by car from Interlaken to Zurich takes 2 hours. Alternatively, you can take a train. When traveling from Interlaken in December, plan for somewhat warmer days in Zurich, with highs around °C, while nights are about the same with lows around °C. On the 1st (Wed), wrap the sightseeing up by early afternoon so you can travel back home.
more less

Chapel Bridge
Highlights from your plan