On the 2nd (Fri), take in the architecture and atmosphere at Santa Maria in Trastevere, admire the masterpieces at Vatican Museums, thencontemplate the long history of St. Peter's Basilica, thendelve into the distant past at Pantheon, and finally admire the local landmark of Trevi Fountain. On the 3rd (Sat), you'll have a packed day of sightseeing: delve into the distant past at Colosseum, explore the ancient world of Palatine Hill, thencontemplate the long history of Roman Forum, thenappreciate the extensive heritage of Piazza Navona, and finally take a stroll through Trastevere.

To find photos, where to stay, more things to do, and tourist information, go to the Rome trip itinerary planner.

Auckland, New Zealand to Rome is an approximately 31-hour flight. The time zone changes from New Zealand Standard Time (NZST) to Central European Standard Time (CET), which is usually a -11 hour difference. While traveling from Auckland, expect much warmer days and somewhat warmer nights in Rome, ranging from highs of 38°C to lows of 24°C. Wrap up your sightseeing on the 4th (Sun) early enough to take a train to Florence.
more less

Kick off your visit on the 4th (Sun): contemplate in the serene atmosphere at Cathedral of Santa Maria del Fiore, explore the world behind art at Gallerie Degli Uffizi, snap pictures at Ponte Vecchio, thendon't miss a visit to Piazzale Michelangelo, and finally admire the masterpieces at Florence Academy of Fine Arts. Here are some ideas for day two: admire the masterpieces at Pitti Palace, get to know the fascinating history of Centro Storico, thencontemplate in the serene atmosphere at The Baptistery of St. John, thenget to know the fascinating history of Piazza del Duomo, and finally take in panoramic vistas at Campanile di Giotto.

Traveling by train from Rome to Florence takes 2.5 hours. Alternatively, you can drive; or fly. Plan for a bit cooler nights when traveling from Rome in August since evenings lows in Florence dip to 20°C. Finish your sightseeing early on the 6th (Tue) to allow enough time to drive to Venice.
more less 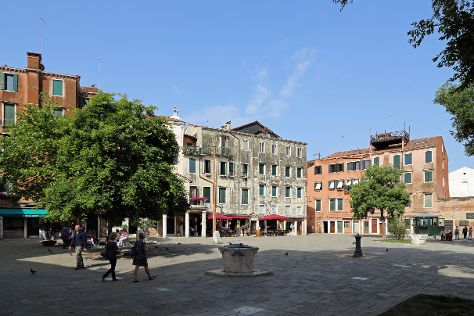 On the 6th (Tue), explore the activities along Canal Grande, wander the streets of Cannaregio, contemplate in the serene atmosphere at Campo del Ghetto, admire the striking features of Basilica di San Marco, thenbrowse the exhibits of Doge's Palace, and finally appreciate the extensive heritage of Piazza San Marco.

Traveling by car from Florence to Venice takes 3 hours. Alternatively, you can take a train; or fly. Expect a daytime high around 34°C in August, and nighttime lows around 22°C. Wrap up your sightseeing by early afternoon on the 7th (Wed) to allow time for travel to Lucerne.
more less

On the 8th (Thu), take in the views from Chapel Bridge, thenexplore the world behind art at The Rosengart Collection, thentake your sightseeing to a higher altitude at Mt Pilatus, and finally explore the stunning scenery at Aare Gorge. Get ready for a full day of sightseeing on the 9th (Fri): see the sky in a new way at Verkehrshaus der Schweiz, look for all kinds of wild species at Pilatus Luzern, and then visit Altstadt Luzern.

To see more things to do, traveler tips, where to stay, and other tourist information, you can read our Lucerne online attractions planner.

Traveling by flight from Venice to Lucerne takes 5 hours. Alternatively, you can drive; or take a train. Traveling from Venice in August, things will get little chillier in Lucerne: highs are around 28°C and lows about 16°C. Finish your sightseeing early on the 10th (Sat) so you can travel to Vienna.
more less

Aare Gorge
Highlights from your plan

Kick off your visit on the 10th (Sat): see the interesting displays at Kunsthistorisches Museum Wien, admire the masterpieces at Belvedere Palace, thentake a stroll through Historic Center of Vienna, and finally take in the architecture and atmosphere at St. Stephen's Cathedral. Keep things going the next day: steep yourself in history at Chapel of St. Virgil, admire the striking features of Schonbrunn Palace, thentake in nature's colorful creations at Schonbrunner Gardens, and finally examine the collection at The Hofburg.

Start your trip to Vienna by creating a personalized itinerary on Inspirock.

You can fly from Lucerne to Vienna in 5 hours. Other options are to drive; or take a train. In August, plan for daily highs up to 31°C, and evening lows to 18°C. Finish your sightseeing early on the 12th (Mon) to allow enough time to travel to Prague.
more less

Kick off your visit on the 12th (Mon): take in the views from Charles Bridge, get great views at Prague Astronomical Clock, step into the grandiose world of Prague Castle, thencontemplate in the serene atmosphere at St. Vitus Cathedral, and finally get to know the fascinating history of Staromestske namesti. On your second day here, get the lay of the land with Walking tours, thenpause for some photo ops at Vyšehrad National Cultural Monument, thentake a stroll through Lesser Town, and finally steep yourself in history at Stary zidovsky Hrbitov.

To find traveler tips, more things to do, photos, and more tourist information, use the Prague travel tool.

Traveling by flight from Vienna to Prague takes 3.5 hours. Alternatively, you can drive; or take a shuttle. In August in Prague, expect temperatures between 28°C during the day and 16°C at night. Cap off your sightseeing on the 14th (Wed) early enough to go by car to Berlin.
more less

For traveler tips, maps, ratings, and tourist information, you can read our Berlin visit planning site.

Traveling by car from Prague to Berlin takes 3.5 hours. Alternatively, you can take a shuttle; or take a bus. Finish your sightseeing early on the 16th (Fri) to allow enough time to travel to Amsterdam.
more less

Start off your visit on the 16th (Fri): explore the galleries of Museum Het Rembrandthuis (Rembrandt House), admire the masterpieces at Rijksmuseum, thenindulge your thirst for a good beer at Heineken Experience, and finally admire the masterpieces at Van Gogh Museum. Get ready for a full day of sightseeing on the 17th (Sat): take an in-depth tour of Anne Frank House, thentake a stroll through The Jordaan, thenwander the streets of Leidseplein, and finally make a trip to Brouwersgracht.

To find traveler tips, where to stay, reviews, and more tourist information, use the Amsterdam trip planner.

You can fly from Berlin to Amsterdam in 4.5 hours. Other options are to drive; or take a train. In August, daytime highs in Amsterdam are 26°C, while nighttime lows are 15°C. Wrap up your sightseeing on the 18th (Sun) early enough to take a train to Paris.
more less

Visit Eiffel Tower and Montmartre for their historical value. Satisfy your inner culture vulture at Louvre Museum and Basilique du Sacre-Coeur de Montmartre. There's much more to do: explore the world behind art at Musee d'Orsay, pause for some photo ops at Arc de Triomphe, contemplate the long history of The Paris Catacombs, and wander the streets of Le Marais.

To see traveler tips, more things to do, other places to visit, and tourist information, read our Paris trip planner.

Traveling by train from Amsterdam to Paris takes 4.5 hours. Alternatively, you can fly; or drive. In August, daily temperatures in Paris can reach 29°C, while at night they dip to 16°C. Wrap up your sightseeing by early afternoon on the 21st (Wed) to allow time for travel back home.
more less